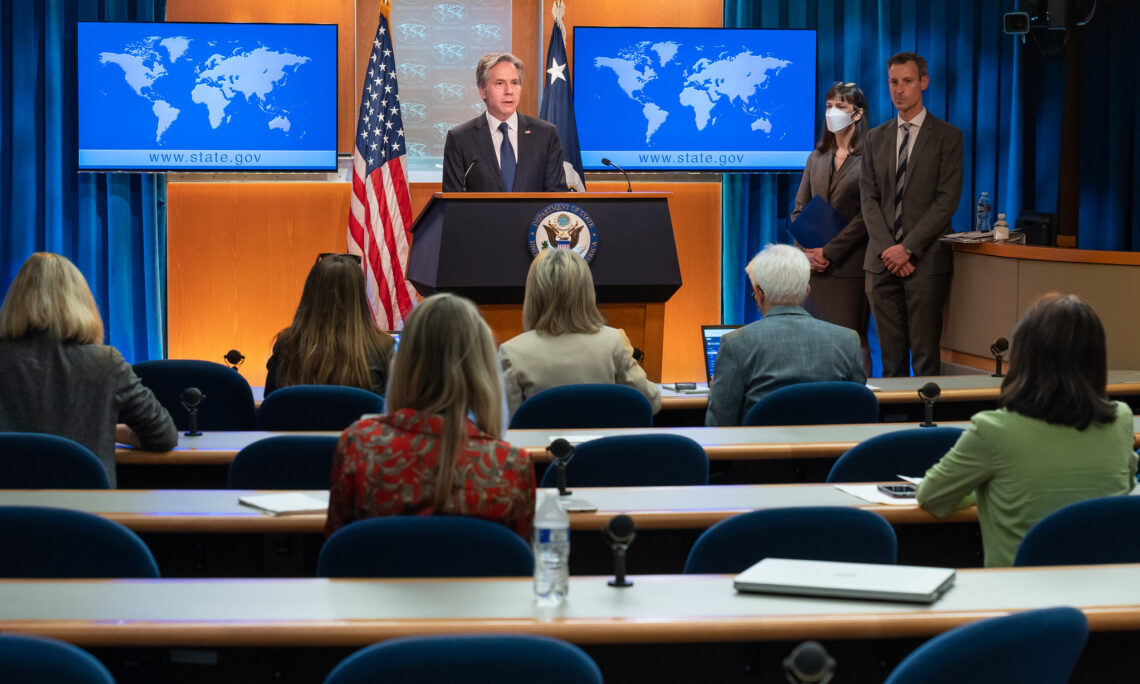 Secretary Blinken on the Release of the 2021 Country Reports on Human Rights Practices (State Dept.)

The annual Country Reports on Human Rights Practices – the Human Rights Reports – cover internationally recognized individual, civil, political, and worker rights, as set forth in the Universal Declaration of Human Rights and other international agreements. The U.S. Department of State submits reports on all countries receiving assistance and all United Nations member states to the U.S. Congress in accordance with the Foreign Assistance Act of 1961 and the Trade Act of 1974.

“This is the second time that I’ve joined the launch of this report as Secretary, because it’s important to U.S. foreign policy; it’s important to this department; it’s important to me personally.  For many years running, we have seen an alarming recession of democracy, the rule of law, respect for human rights in many parts of the world.  In the time since releasing our previous report, that backsliding has, unfortunately, continued.

In few places have the human consequences of this decline been as stark as they are in the Russian Government’s brutal war on Ukraine.  That’s especially true in recent weeks, as Russian forces have been pushed back from towns and cities they occupied or surrounded, and evidence mounts of their widespread atrocities.  We see what this receding tide is leaving in its wake – the bodies, hands bound, left on streets; the theaters, train stations, apartment buildings reduced to rubble with civilians inside.  We hear it in the testimonies of women and girls who’ve been raped and the besieged civilians starving and freezing to death.

In response, people and governments in every region are voicing their condemnation and calling for those responsible to be held accountable.  This global outcry has been clarifying.  In its disdain for human life and dignity, the Kremlin has reinvigorated a belief in people worldwide that there are human rights that everyone everywhere should enjoy, and underscored why these rights are worth defending.

At the same time, civil society, governments, and people around the world are rightly pointing out that Ukraine is, tragically, far from the only place where gross abuses are being perpetrated.  They want the international community to shine a spotlight on human rights abuses wherever they’re being committed and to bring the same urgency to stopping abuses and holding perpetrators accountable.

The United States shares that goal.  This report is just one of the ways that we’re working to achieve it.  It contains individual chapters on nearly 200 countries and territories, each of which offers factual, objective, and thorough accounting of their records on internationally recognized human rights.  Whether a country is a friend or one with which we have real differences, the measuring stick we apply is the same.

That reflects a core principle of human rights: they’re universal.   People of every nationality, race, gender, disability, and age are entitled to these rights no matter what they believe, whom they love, or any other characteristics.  This is especially important as a number of governments continue to claim, falsely, that human rights need to be applied based on the local context.  Little coincidence that many of the same governments are among the worst abusers of human rights.

The universal nature of human rights also means that we have to hold ourselves accountable to the same standards.  Even as this report looks outward to countries around the world, we’ve acknowledged from day one of this administration that we have challenges here in the United States.  We take seriously our responsibility to address these shortcomings, and we know that the way to do it matters: together with citizens and communities, out in the open, transparently – not trying to pretend problems don’t exist or sweeping them under a rug.

And in fact, that’s what distinguishes democracies – our willingness, our commitment to pursue that more perfect union.