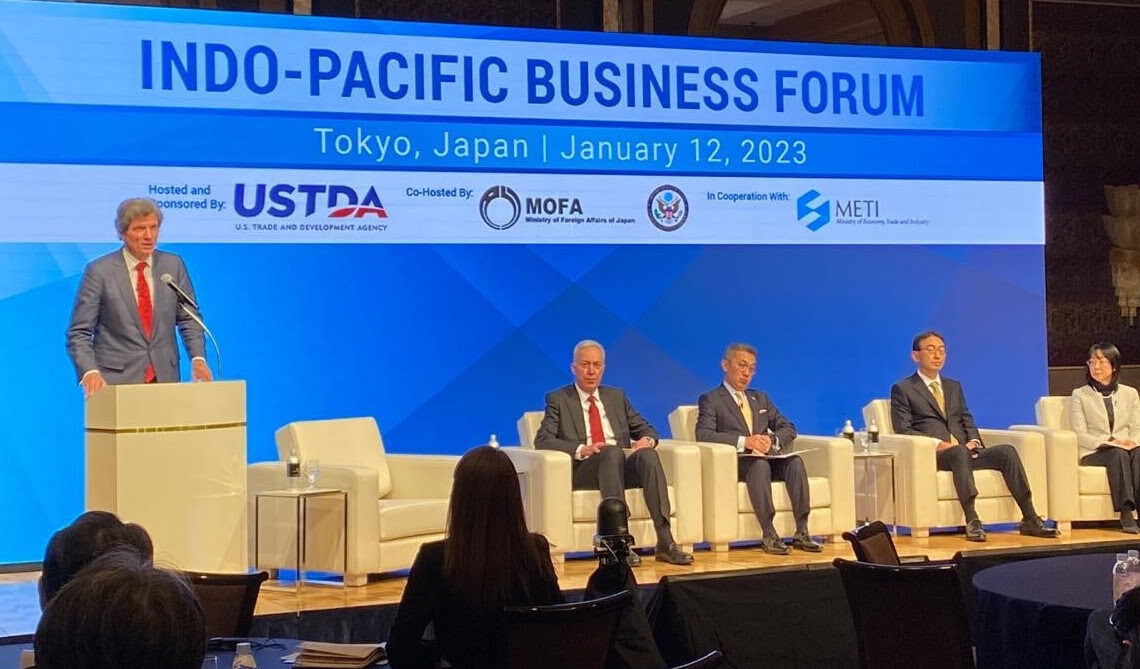 The Governments of the United States and Japan co-hosted the fifth Indo-Pacific Business Forum (IPBF) in a hybrid format on January 12, 2023, in Tokyo, Japan.  The IPBF advances the United States’ vision for a free and open, connected, prosperous, secure, and resilient Indo-Pacific region.

As the premier U.S. government-sponsored commercial diplomacy event for the region, the IPBF facilitates business, government, and civil society participants in building connections and partnerships, exchanging best practices, and stimulating innovative thinking on the challenges and opportunities facing the region.  It showcases high-impact government and private sector activities to support job growth and high-standard economic development for greater prosperity and inclusion in the Indo-Pacific region.

The importance of economic and commercial cooperation and partnership in the Indo-Pacific is paramount.  The caliber of the United States leadership in the 2023 IPBF is a reflection of the importance the United States places on this event.  Four U.S. Cabinet officials, Secretary of State Antony Blinken, Secretary of Commerce Gina Raimondo, Secretary of Transportation Pete Buttigieg, and U.S. Trade Representative Ambassador Katherine Tai gave recorded remarks at the Forum.

U.S. Assistant Secretary of State for East Asian and Pacific Affairs Daniel J. Kritenbrink in welcoming remarks at the event said, “Our commitment to the Indo-Pacific is vital, strategic, and in the mutual interest of the United States and the region.  We take a whole of society approach to the region and of course that includes the business sectors.  Because of the work that all of you have done, the Indo-Pacific is the fastest growing region in the planet, accounting for 60 percent of the world economy and two-thirds of all economic growth over the last five years.”

U.S. International Development Finance Corporation (DFC) CEO Scott Nathan in opening remarks said, “The Indo-Pacific is a top priority for DFC and a core to our mission. We have over 6.6 billion dollars in active commitment throughout the region. And just this past year we committed more than two billion dollars to a diverse set of nearly 50 transactions that bolster economic growth and development across a range of sectors.”

Under the theme of “inclusive and sustainable growth,” the 2023 IPBF provided the opportunity to discuss shared ambitions for the Indo-Pacific Economic Framework for Prosperity (IPEF), as well as the respective priorities for the United States’ APEC host year and Japan’s G7 presidency.  The Forum also provided a chance to highlight continued U.S. engagement with partners on economic issues ranging from infrastructure investment to climate change to critical technologies through mechanisms like the Indo-Pacific Quad with our regional partners Australia, India, and Japan.  More than 140 in-person and 1000 virtual business and government leaders from the United States, Japan, economies of the Indo-Pacific region, and countries around the world participated.

We were pleased to welcome the U.S. and Japanese IPEF negotiators to the Forum to discuss the latest updates and future expectations for the Framework.  IPEF was launched in May 2022 by the United States in partnership with Australia, Brunei Darussalam, Fiji, India, Indonesia, Japan, the Republic of Korea, Malaysia, New Zealand, Philippines, Singapore, Thailand, and Vietnam.  This framework will offer tangible benefits that fuel economic activity and investment, promote sustainable and inclusive economic growth, and benefit workers and consumers across the region.

At the conclusion of the 2023 IPBF, Director of the U.S. Trade and Development Agency (USTDA) Enoh Ebong and U.S. Senior Official for Asia-Pacific Economic Cooperation (APEC) Bureau of East Asian and Pacific Affairs Matt Murray conducted a press briefing with journalists in Indo-Pacific region.