To welcome home the 2015-16 cohort of Youth Exchange and Study (YES) students , the Ambassador hosted an iftaar reception at his residence for 85 young people newly fluent in English and missing their friends and host families back in the U.S. Now in its 12th year, the YES program was established in October 2002 to provide scholarships for high school students (15-17 years of age) from countries with significant Muslim populations, including Indonesia, to spend up to one academic year in the United States. YES students live with host families, attend high school, engage in activities to learn about America, acquire leadership skills, and help educate Americans about their countries and cultures. Several parents of students from this year’s returning cohort were also in attendance as the Ambassador spoke about the importance of educational exchange between our two countries and strong ties between the United States and Indonesia were in evidence as students spoke enthusiastically about the experiences that forever changed their perception of the United States. The YES program is generally regarded as one of the U.S. government’s most successful exchange programs in Indonesia, which includes a range of the best and brightest students from across the archipelago. 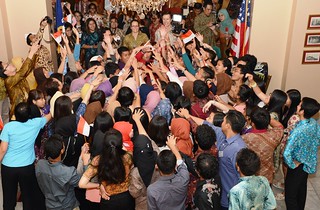