On the afternoon of March 12, the Ambassador visited with nearly 200 high schools students at the International Islamic Education Center (IIEC), an Islamic boarding school in central Jakarta.  The students entertained the Ambassador with several dances from Sumatra and Aceh as a welcome, and presented a slideshow which outlined their experiences in the U.S. last year during a six week trip to San Diego.  After the welcoming program the Ambassador spoke about educational opportunities that exist in the U.S. for Indonesian students and directly countered common myths regarding travel and study including low visa approval rates and high tuition.  The Ambassador also responded to several questions about perceived “Islamophobia” in the U.S. by stressing that the cases that have hit the news are not representative of the millions of Muslims who have seamlessly integrated into U.S society. 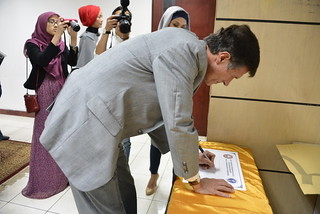