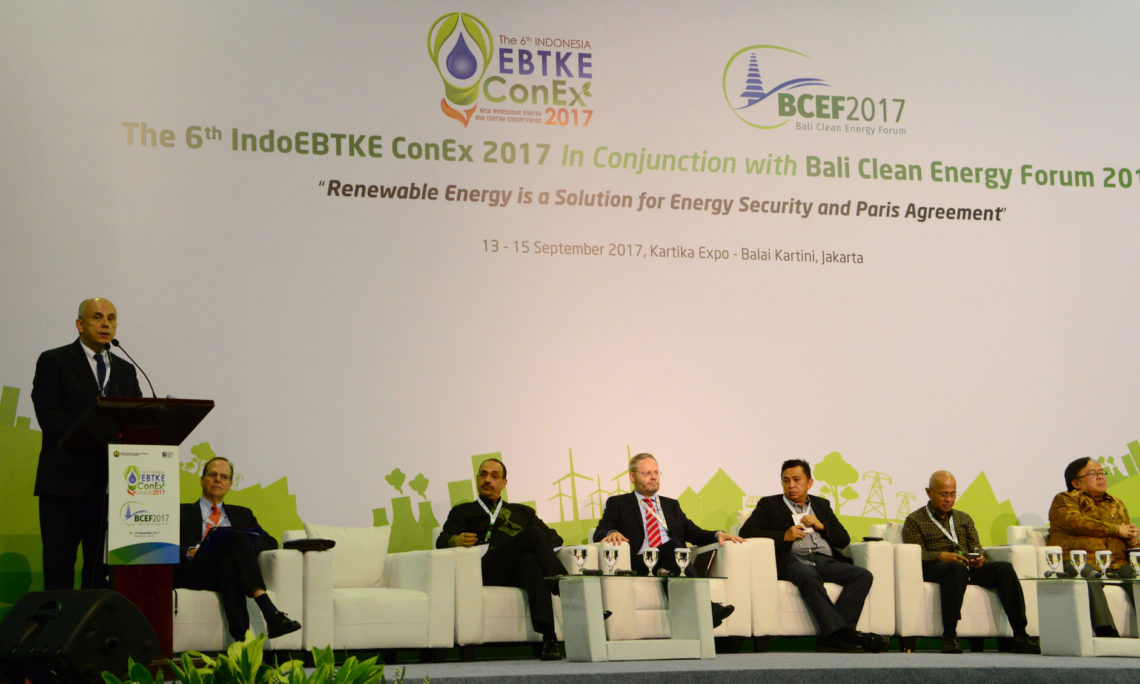 This is an excellent event, and I want to recognize Pak DirGen Rida Mulyana, Dr. Surya Darma, and Pak Paul Butarbutar for all their effort in bringing this together.

Let me also begin by thanking Minister Jonan for the excellent cooperation between his Ministry and the U.S. government.  Minister Jonan and I share a commitment to action, and an aversion to long speeches.  So I’ll keep my remarks short, Mr. Minister.

You heard Ambassador Simons describe the benefits and challenges of integrating renewable energy into the grid.  My goal today is to outline how the United States and Indonesia are working together on these issues, offer several examples of cutting-edge projects we’re pursuing together, and highlight a few policy changes which we believe would strengthen Indonesia’s renewable energy sector.

Let me begin by emphasizing the United States’ commitment to renewable energy as part of President Trump’s energy strategy.

Renewable en increase ever. This was the first year that renewable energy investment surpassed investment in all other forms of energy production.

The next year, in 2016, saw more of the same.  However, because of dramatically declining prices, we were able to buy more for less money. A dollar of investment in 2016 went 33 percent further than in the previous year, with $288 billion supporting construction of 161 gigawatts of new capacity.

The United States leads the world in R&D investment in renewable energy and energy efficiency. And over the last five years we have seen dramatic decreases in the cost of solar and wind power, to the point where wind turbines and solar panels are now cost-effective and, in many cases, competitive with power generated by either coal or natural gas.

In the United States, clean energy accounts for nearly half of the jobs in the U.S. energy sector.  Clean energy employs almost 3 million people, with 2.2 million Americans working in energy efficiency and nearly 500,000 working in renewable energy.  And an additional 960,000 people work on clean energy in the transport sector, namely on alternative vehicles and fuel economy.

Given the ever-increasing economic viability of clean energy in the United States and its impact on job growth, I can confidently say the United States intends to remain a leader across the sector—from research and development to commercialization and deployment.

So, what does this mean for our renewable energy cooperation with Indonesia?  It means U.S. industry and the U.S. government will continue to seek ways to partner, promote trade and investment, and support Indonesia’s goal of reliable, affordable, and sustainable energy for all.

Let me offer a few examples of our partnership.  Our efforts include contribution of expertise as well as concrete financial assistance, such as:

USAID is helping facilitate renewable energy finance by supporting Indonesia’s financial regulatory agency, OJK, in its implementation of Indonesia’s Sustainable Finance Roadmap.  And USAID is creating expert-to-expert connections between Bappenas, ESDM and PLN and utilities, government agencies, think tanks, and solar and wind farms in California on the integration of renewable energy into the power grid.

The Millennium Challenge Corporation’s Green Prosperity Project is another example where the U.S. government is partnering with Indonesia to develop renewable energy.  MCC has made grants totaling $48 million to generate 3.4 MW of electricity through off-grid systems in five remote locations.  MCC has also invested $2 million for new national standards in training and certification for the renewable energy labor market. These activities are developing competency standards in four renewable energy technologies, which will help meet the rising demand for skilled labor in Indonesia’s renewable energy sector.

The Department of Energy’s $1.3 million Sustainable Energy for Remote Indonesian Grids has completed feasibility studies for renewable energy generation on three remote Indonesian islands.  The project has drawn on the expertise of the U.S. National Renewable Energy Laboratory and remains ready to work with the Indonesian government to accelerate deployment of renewable electricity in remote locations across Indonesia.

In addition, the Department of Energy, through the Lawrence Berkeley National Laboratory, has worked with the Indonesian government to craft a national energy efficiency roadmap identifying over 10 gigawatts of peak demand savings achievable by 2025.  The efficiencies will help reduce power generation needs and improve the reliability of Indonesia’s power infrastructure and the affordability of its electricity supply, saving consumers $12-15 billion in electricity costs.

For example, through a $2 billion investment, Pacific Infra Capital LLC is working with PLN to implement an Advanced Metering Infrastructure system.  This smart metering system will allow better integration of renewable energy into Indonesian grids.

Ormat, an American geothermal development company, and its partners are celebrating the commissioning of the Sarulla, North Sumatra geothermal power plant.  Once fully developed, the project will generate 320 MW of power and represent one of the world’s largest geothermal power plants, supporting and creating both U.S. and Indonesian jobs in clean technology.

NextGen, another U.S. company, is working with the Samarinda municipality in East Kalimantan to develop an 800-ton per day low carbon waste-to-energy/bio-char fertilizer project. The facility will process municipal solid waste into 18 MW of electricity and bio-char organic fertilizer for local agriculture, likely the first low carbon, waste-to-energy gasification facility in Indonesia.

Finally, UPC, a worldwide renewable energy developer based out of Colorado, is working with PLN and other local partners to develop wind, solar, and hydro projects totaling more than 500 MW at over 20 locations throughout Indonesia.  Among these is the 75 MW Sidrap wind farm in South Sulawesi, made possible by a $120 million U.S. Overseas Private Investment Corporation loan.  The Sidrap wind farm is the first utility-scale wind energy project in Indonesia.

What does all this cooperation mean for Indonesia?  It means an American company, General Electric, and its Indonesian partners, were the first to deliver power under President Jokowi’s 35,000 MW plan.  It means another American company, PowerPhase, is working with PLN to dramatically improve the efficiency and power output of existing gas-fired turbines, reducing emissions and saving Indonesia $11.6 billion in power generation costs over 20 years.  And it means USAID, together with the Indonesian government, has mobilized an estimated $845 million in private and public investment in renewable energy since 2015 and improved energy access to over 500,000 people.

These examples prove that our renewable energy cooperation with Indonesia is strong, but allow me to offer some thoughts on how it could be even stronger.  Accelerating investment and development of renewable energy in Indonesia will require more fine tuning of the tariff structure, local content requirements, permitting processes, and financing schemes.

Foreign investors also tell us that the government should consider increasing renewable energy tariffs to reflect the true benefits of renewable energy development, especially in remote or less-developed areas.

President Jokowi and his economic team deserve a tremendous amount of credit for identifying many of the problems that are keeping Indonesia from reaching its full economic potential.  But there is still much more that can be done, especially in the renewables sector.

We are committed to working with President Jokowi, Minister Jonan, and other members of the administration to create a truly level playing field where all businesses have an equal opportunity to compete.  This is important because while Indonesia is a big market, ASEAN is bigger, Asia is bigger, and the global marketplace is bigger still.  In today’s global economy, companies draw on the skills and resources of the world to produce products for global consumers.  Competition drives progress.  Protectionism impedes it.

I’ll conclude by connecting this all to the panel’s theme of renewable energy and energy security.  Ambassador Simons will tell you that the IEA defines energy security as the uninterrupted availability of energy sources at an affordable price.  Energy security is a top goal of the Jokowi administration, codified in the President’s 35,000 MW plan.  To provide affordable electricity and meet the government’s goal of 99.7 percent electrification by 2025, Indonesia may need to construct at least 80 GW of additional generation at an investment cost of over $100 billion.

Delivering on these goals and providing energy security for Indonesia will require international partnerships not only to share best practices and promote trade and investment, but to offer honest, critical feedback when needed.

The United States stands ready to continue this cooperation with our Indonesian partners.  As a global leader in clean energy technology with a depth of resources — academic and research, commercial, technical, and bureaucratic — the United States looks forward to helping Indonesia harness its tremendous renewable energy potential.

Thank you and thanks again for the opportunity to speak today.