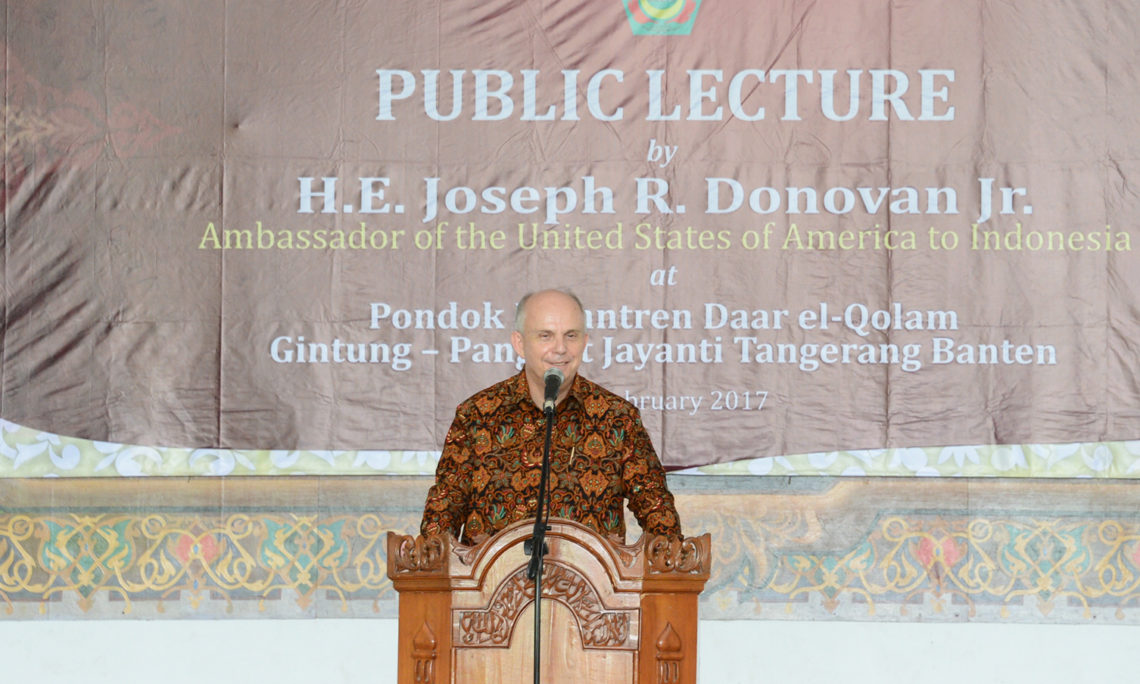 Thank you for that warm welcome – I am very excited to be here at Pesantren Daar El Qolam.

I’m excited to be here because your pesantren has a fabulous reputation as an influential advocate of “Indonesian” Islam and tolerance that is admired around the world.  Some of your classmates have participated in Southeast Asian Youth Leadership Exchange Programs in the U.S., and others have piloted a virtual classroom with students in the U.S., Tunisia and Thailand.  In this sometimes very troubled world we can all benefit from your energy and experience.

As you may know, I have just arrived in Indonesia and I have much to learn about the amazing archipelago that is Indonesia.  That is another of the many reasons why I wanted to come here today and meet with all of you.  Please help me better understand your country and your culture!

In the short time that I have been here, I have had a chance to see some of the beauty and diversity of Indonesia through a trip to President Jokowi’s hometown of Solo, a scuba diving trip to Pulau Putri, as well as short trips to Surabaya and Medan.  But I know I have only just scratched the surface and I am looking forward to many more trips and, more importantly, conversations, with Indonesians from every part of the country.  Although I am still working on my Bahasa Indonesia, I do know the phrase “tak kenal maka tak sayang” which I believe means that you need to know someone before you can really appreciate them, so I would like to start by introducing myself to all of you.

I come from a small village about 90 kilometers from New York city.  My great, great grandfather came to that rural part of New York almost 170 years ago, fleeing from a terrible and deadly famine in Ireland.  Today, I suppose we would call him an economic refugee.  He left his wife and young child behind in Ireland, and, according to my family’s legend, he and a friend walked the 90 kilometers before he found a job as a laborer on a farm.  He worked hard apparently, and a year or so later was able to send for his family.  Around this time, he and a few friends, helped establish a small Catholic church near his farm.  That church burned down many years ago, but it was rebuilt and still stands today.  Several decades after that his son, my great grandfather, helped establish another church in what’s now my hometown.  My family goes to that church every Sunday.  I was raised in a Catholic tradition, although I can’t pretend to be a good Catholic.  But my faith has been a source of comfort and strength in hard times.  It also contributed to my belief that tolerance, kindness and respect for the religious beliefs of others is the right way to live.

I tell you my story because it is not unique in America.  In fact, my story is similar those of many, if not most Americans. It is the source of our belief in tolerance and respect for the beliefs of others.

When you see stories about America in the news, I hope you will think of my story and recognize that America, like Indonesia is a diverse nation, with many stories and that like Indonesia, tolerance and respect is a source of our strength and inspiration.   Like Indonesia, these beliefs have been questioned from time-to-time, but like Indonesia, I am confident they will always prevail.

I say this because I believe that the American and Indonesian people are at the core tolerant people.   I was amazed to learn that Indonesia’s 17,000 islands contain 300 different ethnic groups and over 700 languages – incredible.  Although the United States is a country of immigrants and our population is quite diverse, we cannot compete with those numbers. What we do share is a deep respect, interest and tolerance for the diversity in our people’s backgrounds, cultures and traditions.  In our Embassy alone I was surprised to find staff members from across the archipelago including Sumatra, Kalimantan, Sulawesi and even Ternate and Papua.

I would like to speak a little now about our own recent elections and our new administration which is only a few days old.  After that I am looking forward to hearing more from you, especially about any ideas you have on how we can further strengthen the relationship between the U.S. and Indonesia.

As you may have seen President Trump was inaugurated as the 45th president of the United States on the 20th of January, and his administration has already made some significant steps.  Although I cannot predict the future, I can tell you that your country will remain an important and strategic partner for the United States.  For our part, we wish to continue to work with you  on a range of issues that affect both of our countries.  Our partnership benefits both of our countries, and I want to outline just a few ways in which that it true.

As you may know the U.S. is a major importer of Indonesian products, and during my tenure here I will focus on increasing trade and investment between our two countries in a way that benefits both American and Indonesian workers and companies.  There is a huge amount of potential in Indonesia for U.S. investment in a number of sectors including in the development of clean energy alternatives such as geothermal which directly supports President Jokowi’s 35,000 MW program. We are also interested in opportunities within the aviation sector through cooperation in airport security and infrastructure, and are excited to work with Indonesia to eventually realize direct flights to the United States from Jakarta.

We are also supporting Indonesia’s own efforts to help protect one of the most beautiful ecosystems in the world, your own backyard. Indonesian forests and seas are some of the most biologically diverse in the world and, through USAID and other agencies, we are working to help our Indonesian partners to reduce forest fires, restore peatland, protect reefs and prevent an increase in ocean trash.

Finally I want to mention one of the ways that we cooperate that I hope you are interested in.  Over the last few years we have been working hard at the Embassy to increase the number of Indonesian students studying at U.S. universities, community colleges and high schools.  We have had some success. Last year we saw almost a 7% growth in the number of Indonesian students in the U.S., but I know we can do better.  In fact, in the coming days we will hold education fairs in Jakarta, Surabaya and Medan in which representatives from many U.S. community colleges, colleges and universities will be present to answer the questions of Indonesian students and their families.  I hope that some of you will be able to attend!

I hope that many more Indonesians will spend time in the United States not only to study, but also to gain a better understanding of our country and our culture.  I also want to make sure that this is a two-way street, and want to see many more American students come to Indonesia to experience the richness and diversity that your country has to offer.  Our two nations share so much in common but unfortunately we historically lack the people-to-people ties that help build that understanding across generations.  So I would encourage all of you to consider pursuing study in the U.S. whether it is in high school or at university.  There are many scholarships available and members of my staff are here would be happy to have any questions you might have.

I want to thank you again for allowing me to be here today, and I am eager to hear your views of the U.S. – Indonesian relationship.