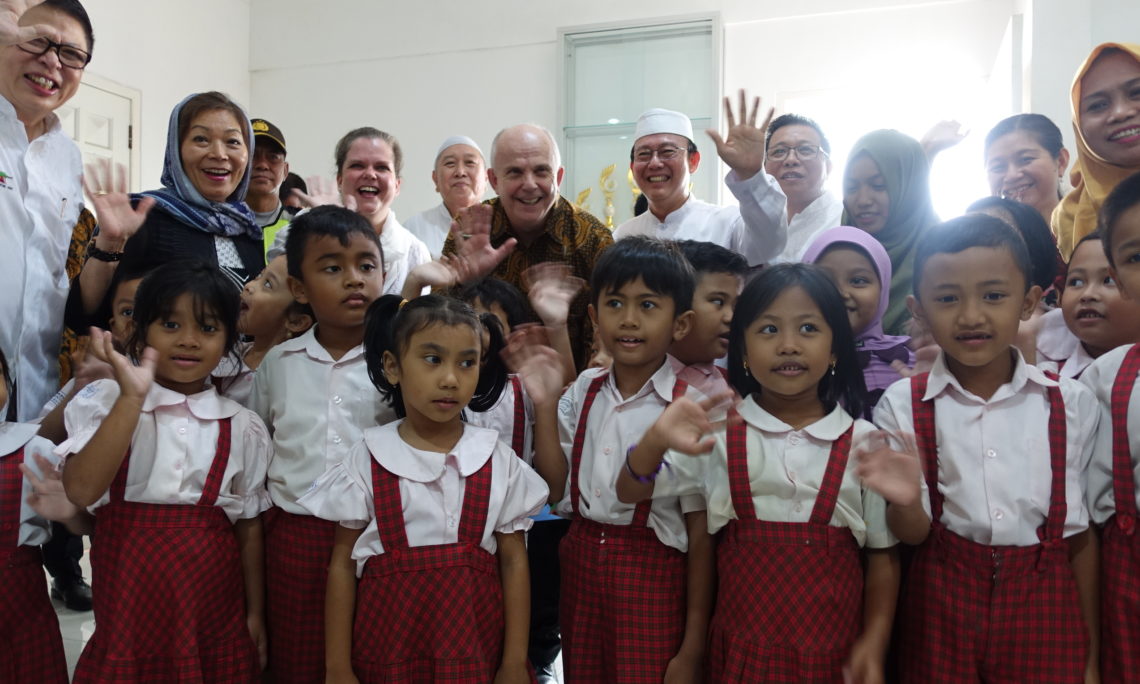 United States Ambassador to Indonesia, Joseph R. Donovan Jr., traveled to East Java from 8-9 May, where he highlighted the strong ties between the United States and Eastern Indonesia. During his visit, he attended the opening of the new Peace Corps office, met with alumni of United States Government-sponsored exchange programs, toured the Cheng Hoo Mosque, and met with the President Director and Editor-in-Chief of Jawa Pos. The visit concluded with a celebration marking the 242nd American Independence Day held at the U.S. Consulate General Surabaya.

While meeting with alumni from United States Government-funded programs, Ambassador Donovan heard about the impacts these exchanges have had on the lives of participants. Representing a range of programs, including YSEALI academic fellows, Youth Exchange Study (YES) scholars, and the International Visitor Leadership Program (IVLP) the Ambassador heard about the importance of strengthening the people-to-people ties of Indonesia and the United States. “Together we are partners working together to ensure the relationship between the United States and Indonesia stays strong for years to come,” said Ambassador Donovan

On the same day, Ambassador Donovan had the opportunity to visit the Jawa Pos newsroom, one of Indonesia’s largest newspaper networks. With the Director and Editor-in-Chief of Jawa Pos, the Ambassador talked about his impressions about Indonesia and East Java, U.S.-Indonesia relations, exchange programs between the U.S. and Indonesia, and the U.S. investment in East Java. Additionally, Ambassador Donovan discussed the importance of press freedom saying, “Journalists shine a light on many issues; keeping citizens informed, prompting robust debate and discussion, and holding governments, including our own, accountable.”

Ending his trip to Surabaya, Ambassador Donovan and Consul General Heather Variava welcomed over 300 guests at the Consulate General of the United States in Surabaya, to celebrate the 242nd U.S. Independence Day. This year’s Independence Day theme is Partnerships Across the Oceans, emphasizing the U.S.-Indonesia Strategic Partnership, and our enduring relationship, dating back to 1866, when an American trade office was opened in Surabaya. In his remarks, Ambassador Donovan said, “Our Strategic Partnership works – very simply – because the United States and Indonesia have a mutual stake in each other’s success. We are two democracies with a shared belief in unity in diversity – Bhinneka Tunggal Ika – and the right of all nations to live in prosperity, security, and liberty in a rules-based order.” At the reception, Consul General Variava also announced that she will soon end her tenure as the Consul General of the United States in Surabaya, and will serve as the Deputy Chief of Mission at the United States Embassy in Jakarta.