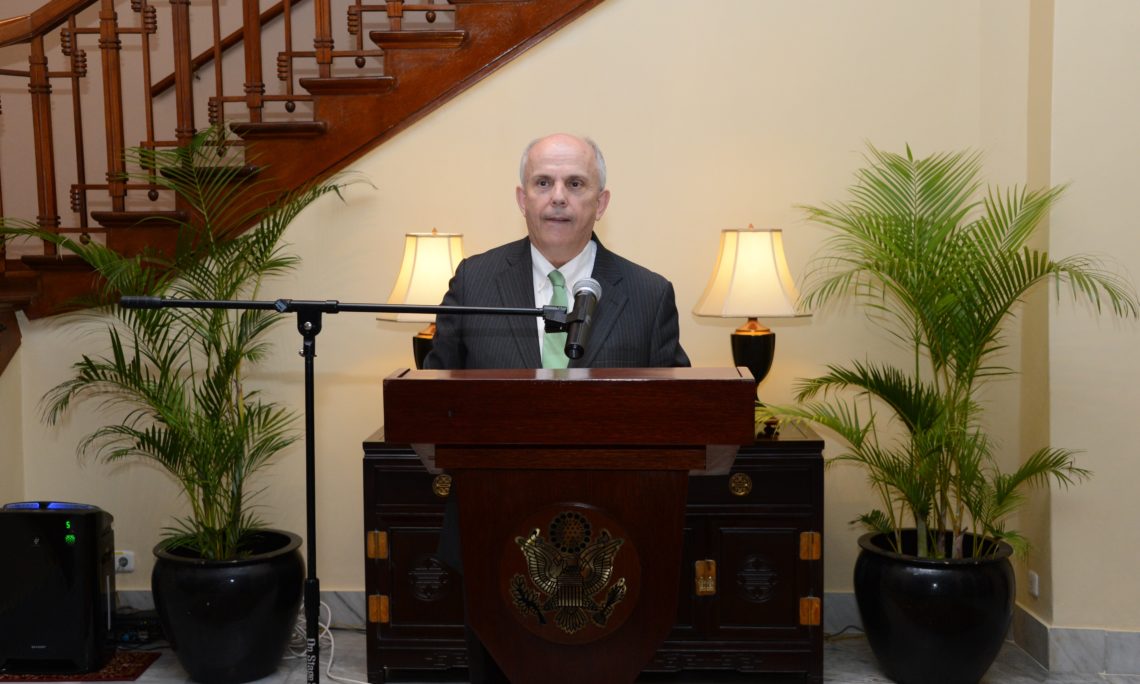 This house has been the American Ambassador’s residence for years and it has been the site of many memorable events.

But tonight may be a first for this very venerable house.

Certainly for the first time in living memory, we are host to two American Noble Prize Laureates.

As you all know, the Noble Prizes are awarded for outstanding contributions to humanity, essentially in the fields of science, culture and politics.

In the entire 116 year history of the prizes there are only 911 Laureates; two of them are here with us tonight.

That is a very unique honor.

Before I ask them to speak I would like to offer special thanks to the International Peace Foundation – Uwe and Daniel – who have been instrumental in bringing Prof. Glashow and Dr. Roberts to Indonesia as part of the 6th ASEAN event series.

This year’s series, “Bridges – Dialogues Towards a Culture of Peace,” is being held throughout Southeast Asia including Indonesia. The U.S. Embassy is pleased to support this series and be the first stop – for the Nobel Laureates this evening.

Tonight demonstrates the strong and ongoing U.S. – Indonesia partnership. A partnership that promotes our shared values of tolerance and diversity as well as seeks to further our work together in the area of higher education and research.

Expanding exchanges is important to Indonesians and Americans alike. It is one of the prominent pillars of our bilateral relationship with Indonesia, a focal point for our partnership and our work here at the Embassy.  It is also something I personally feel very strongly about, in particular, the experience – often life changing – for students or teachers or researchers who study abroad…either Indonesians to the United States or Americans coming here.

Right now, there are many Americans who study, teach, and conduct research in Indonesia. And increasingly there are more Indonesians studying or doing research in the United States.  But, we hope to see greater growth in the future because it not only opens up new networks and new possibilities, but it also contributes significantly to growing both our country’s economies.

Tonight we celebrate this partnership, but also look to make new connections. I encourage all of you to take this opportunity to network so that we can further our efforts in this important area.

I promise that I am now about to ask Prof. Glashow and Dr. Roberts to make some remarks.  But first a confession on my part.

As a layman, I have struggled to understand their work and their achievements.  And I am afraid that I cannot do them justice.

As best as I can understand it, they have worked to add to our understanding of two perplexing questions: where did we come from, and what are we made of.  By my standards we have made remarkable progress during my lifetime but we have so much further to go.

Professor Glashow’s work has been instrumental in our understanding of how our universe came into being.  He has helped to further develop the Grand Unified Theory of all particles and all forces. His work has fueled an ongoing search for rare events and exotic effects that may shed further light on the evolution of the early universe.  It’s my honor to ask Professor Glashow to say a few words.

Dr. Sir Richard Roberts discoveries changed completely the way biologists think about genes and has led to decisive progress in many fields including cancer research.    His discovery of the discontinuous gene structure found in higher organisms has important implications for the study of genetic diseases and this structure is believed to drive evolution.