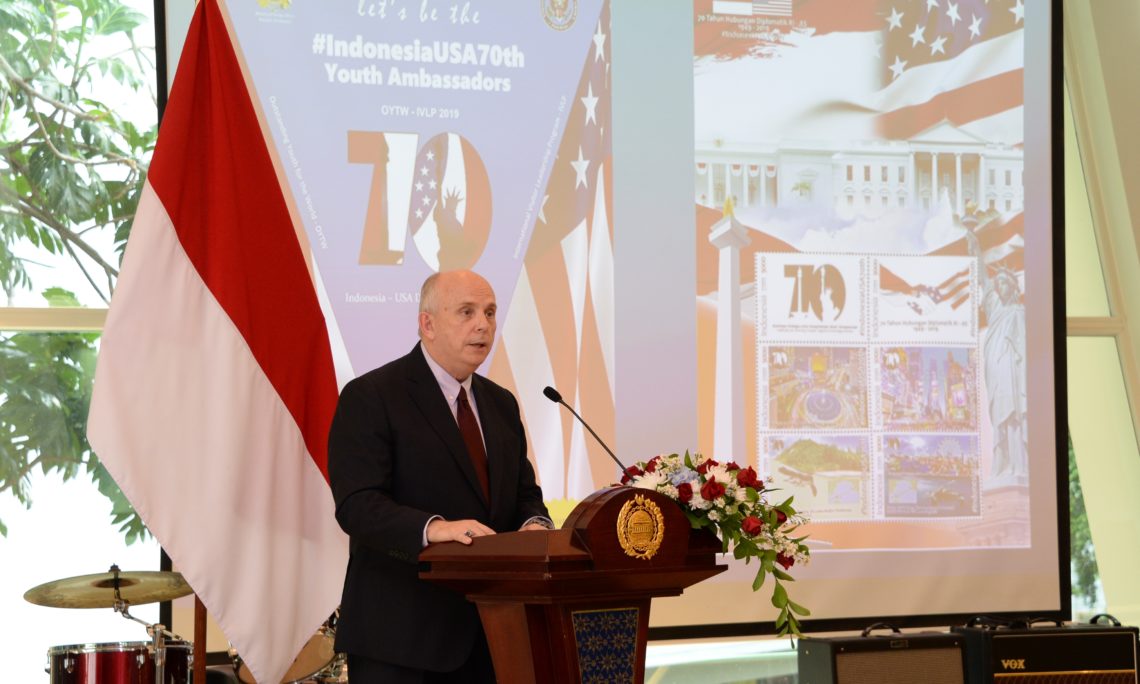 Deputy Minister of Foreign Affairs of the Republic of Indonesia, H.E. Abdurrahman Mohammad Fachir, Director General of American and European Affairs, H.E. Muhammad Anshor, Director General of Information and Public Diplomacy, Mr. Cecep Herawan, friends, I am so pleased to be here at KEMLU for this event celebrating 70 years of diplomatic relations between Indonesia and the United States.

Last summer, when Minister Retno and Secretary of State Pompeo met during his visit to Indonesia, they talked about the importance of this 70th anniversary milestone.  Out of those discussions came our motto for the year — “Celebrating Diversity, Partnership, and Prosperity” – and the ideas for the programs we are announcing today.  I want to thank KEMLU’s team, particularly the Americas desk and the Public Diplomacy group, for working so hard with the Embassy’s Team 70 to develop meaningful activities to commemorate this important anniversary.

As diplomats know, when people speak of diplomacy, they often have in mind a vision of government officials sitting around a table, negotiating the language of documents, resolutions, and treaties.

We also know, however, that diplomacy is fundamentally about the relationship between people.

In January of this year, I had the pleasure of attending a gamelan concert at our National Cathedral, an event organized by the Indonesian Embassy in Washington.  It was a great way to kick off the yearlong celebration of the 70 years of ties between Indonesia and the United States.  Here in Jakarta, we have kept that momentum going with a number of activities, starting with a classical piano recital at my residence.

These activities have included an event at Borobudur demonstrating our joint commitment to eliminating tuberculosis.  It has included commemorating the USS Houston, a ship lost during the Battle of the Sunda Straits in World War II.  We fused our musical traditions with performances by the Dangdut Cowboys, a group of American musicians learning and dancing together with Indonesians. We have talked about education and study in the United States at “Diplofests” across the country.  During my visit to Morotai last week, we highlighted the establishment of Marine Protected areas designated to improve the livelihood of residents in the area.

And there is more to come.  We are launching a digital platform, www.indonesiausa70th.com, where you can see some of the places, stories, and dreams that showcase our broad partnership with Indonesia.

The reason we are celebrating this 70th anniversary throughout the year is because this relationship is so broad.  It is so diverse.  It has so many stories, and so much potential.

That potential, those dreams if you will, is the energy that drives our young people, and it is why I am particularly proud that we are launching the Indonesia-USA 70th Youth Ambassadors program together.

The program combines two of our best “people” programs – Indonesia’s Outstanding Youth of the World program and our International Visitors Leadership program.  Together, we will select 10 of Indonesia’s most promising future leaders to explore the relationship between the United States and Indonesia.  These Youth Ambassadors will spend three weeks traveling around the United States, forging relationships, and engaging with fellow young Americans.

Over the years, the engagement of Indonesians with the United States has been a remarkable success story.  Since 2008, over two million people have visited our American Spaces throughout Indonesia, including our one-of-a-kind center called @america, participating in nearly 15,000 programs.

From education advising to tackling corruption to empowering women to combatting hoax news, these engagements are forums for the free exchange of ideas and information. They are forums for learning together in a respectful environment, regardless of one’s religious, ethnic, gender, or political identity.

We have supported over 11 thousand Indonesians to participate in exchange programs over the past 70 years.  Increasing these people-to-people connections and interactions will continue to result in enduring friendships and partnerships built on trust, respect, and the knowledge that the United States and Indonesia are always better when we work together.

I am honored to have the opportunity to see the unveiling of the Commemorative Stamps, and want to thank the government of Indonesia, particularly the team at PT POS, who worked on their design.  Stamps have always been symbols of connection and engagement, of reaching out.  In fact, some of Indonesia’s first postage stamps included Indonesia’s founding fathers alongside America’s founding fathers and leaders. These Commemorative Stamps will stand as another beautiful symbol of the important relationship between the peoples of Indonesia and the United States.

Thank you very much.

(As prepared for delivery)