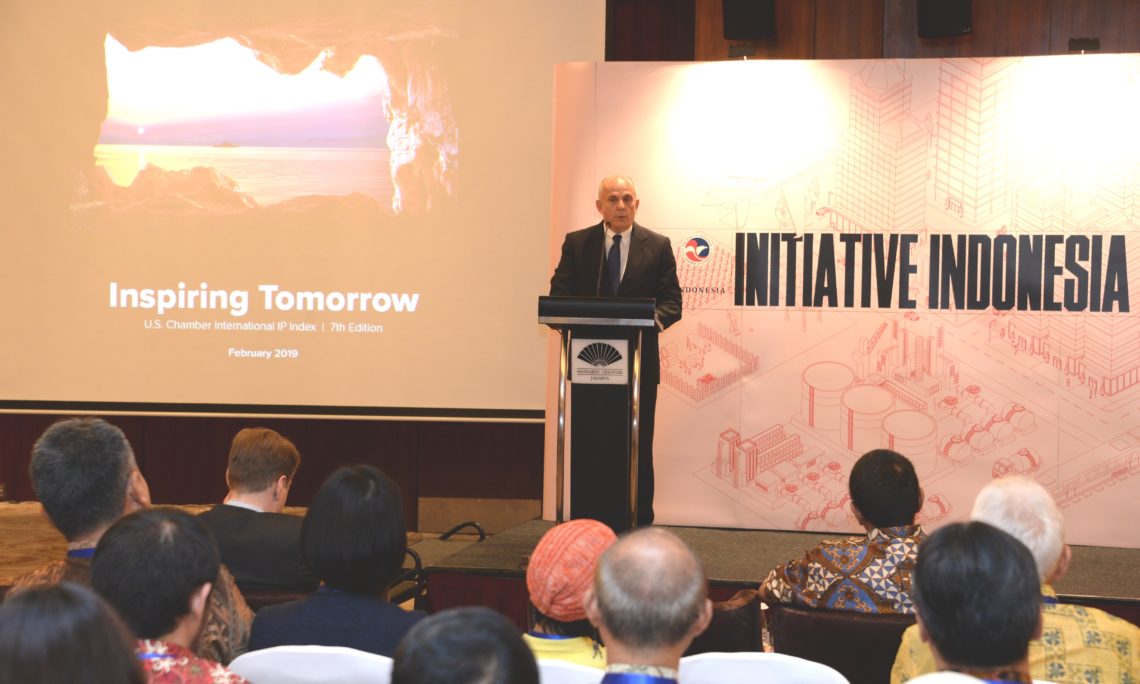 I’d like to thank the U.S. Chamber of Commerce for the opportunity to be here with the members of the Industry 4.0 trade mission and to witness the launch of the seventh edition of the Global Intellectual Property Center’s International IP Index.

Minister Yasonna Laoly, we are honored to have you here with us this evening.

Before I continue, I’d like to take a moment to offer my condolences and appreciation for a special member of the AmCham family whom we lost recently, Arian Ardie. Arian played an invaluable role organizing high profile AmCham conferences and events like the one we are enjoying tonight.  Arian was also a great friend of the U.S. Embassy having worked on the design and creation of our @america cultural center.

He devoted himself to building bridges between the United States and Indonesia. In many ways, he was a living symbol of the cultural and economic connections that bind our two countries together.  He will be sorely missed.

This is a year for celebrating the ties between the United States and Indonesia.

In 1949, our two countries established diplomatic relations. Over the course of seven decades, this relationship has grown into a thriving partnership between two of the world’s most diverse countries, its second and third largest democracies, which are committed to working together to protect a stable, free, and prosperous Indo-Pacific.

Just as the United States is a country made up of many different peoples and cultures, so too does Indonesia find strength in the same qualities. It is no wonder that we have similar national mottos: “Bhinekka Tunggal Ika” and “E Pluribus Unum” – out of many, one.

Building on our common foundations of independence, ethnic and religious diversity, and vibrant democracy, the United States and Indonesia have a long history of creating private sector partnerships that lead to prosperity for the citizens of both our countries.

I see even greater opportunities in the seventy years to come.

Our two countries are at the forefront of a wave of digital innovation that is rightly called a new industrial revolution. Just as electricity, the automobile, and the airplane irrevocably changed the way we worked and lived in the twentieth century, the internet, mobile phones, and (like it or not) social media have already transformed our lives in this century.

The United States is the birthplace of many of these technologies, but to anyone who has visited Jakarta it is plain to see that the future of the digital economy is taking shape here in Indonesia.

In a few short years, Indonesia’s digital economy has become a leader in ASEAN, home to a stable of four unicorns. Indonesian online companies like GoJek, Tokopedia, Traveloka, and Bukalapak are becoming household names like Google, Uber, Facebook, and Apple.

Using the latest technologies – cloud computing, artificial intelligence, and augmented reality – these companies are expanding not only here, but also abroad in Thailand, Vietnam, and the Philippines.

I believe that this is just the beginning, and that Indonesia has the potential to play an even more influential role.

Just this morning, I attended a graduation ceremony for the first batch of students at Apple’s App Developer Academy in Tangerang. While the facility was state-of-the-art, even more impressive were the 166 graduating students who highlighted the tremendous talent here in Indonesia through the mobile applications they developed for e-health, education, and ecommerce.

A little over two weeks ago, we saw the successful launch of the Nusantara 1 Satellite for Indonesian company PSN. That satellite was built by SSL, based in California, and launched on a SpaceX Falcon 9 reusable rocket from Cape Canaveral in Florida.  That satellite will bring internet connectivity, and new opportunities for education and business, to thousands of Indonesians.

Working together, U.S. and Indonesian innovators can change every aspect of our countries’ economies for the better – making farms and factories more competitive, making cities smarter and safer, and bringing Indonesia’s 17,000 islands closer together.

This is at the core of our Indo-Pacific strategy, which envisions a peaceful and secure region where all nations are sovereign, and creates a framework for economic growth that is led by the private sector.

We emphasize free, fair, and reciprocal market-based trade and investment policies.  We enable our partners to build sustainable infrastructure that is sustainably financed to increase regional connectivity while preserving national sovereignty.

We believe strongly that Indo-Pacific economies, like Indonesia, need to embrace investment-friendly policies and revise outdated laws to promote a robust, open, and vibrant market.

That is why it’s essential for governments to get the fundamentals of intellectual property protection right.

There is no innovation without innovators. And an economy that doesn’t protect the property rights of innovators will inevitably fall behind in the race to develop new technologies.

That is why the U.S. government promotes global innovation as one of our foreign policy goals, by advocating for a business environment that allows innovators to flourish. That includes advocating for the effective protection and enforcement of IP rights in Indonesia.

We were happy to see the signing of the U.S.-Indonesia bilateral IP work plan in May 2018.

Over the past year, we were proud to host training programs for Indonesian regulators and law enforcement agents on everything from copyright best practices to improving the interdiction of fake products at the border.

We look forward to doing more with Indonesia to implement this work plan.

Support for global innovation also means support for modern education. Much of our work in Indonesia involves helping young Indonesians contribute to the 21st century global economy through educational partnerships.

We know that training in science, technology, engineering and mathematics are essential to innovation. It’s therefore no coincidence that these are fields of choice for Indonesian students in the United States.

While almost 9,000 Indonesians are currently studying in the United States, I would like see this number greatly increase.

Of course, there is much that still should be done to encourage tougher enforcement nationwide for intellectual property rights and to ensure that Indonesia’s system of IP protections is consistent with international norms.

We are committed to being Indonesia’s partner in accomplishing this goal so that both of our countries can benefit from the tremendous changes that technology will bring to our economies in the years to come.

My congratulations to the U.S. Chamber and to AmCham Indonesia for the Investment Initiative, and for their contributions to strengthening the trade and investment ties between the United States and Indonesia.