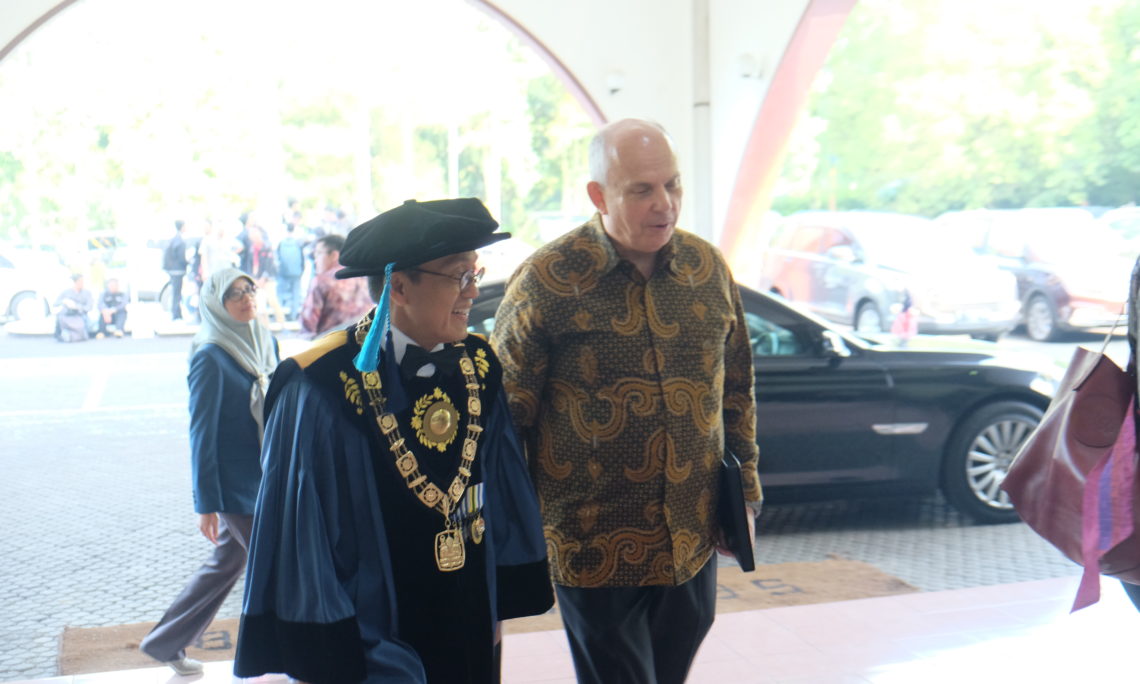 Selamat pagi. Good morning everyone.  University Rector Professor Kadarsah Suryadi, thank you for inviting me to join this momentous occasion.

I’m delighted to be here this morning to help congratulate the 950 graduates and their proud families. It’s a great honor to speak at this distinguished university — one with so many connections with the United States dating back to the mid 1950’s when visiting professors from the University of Kentucky taught here.

Before I begin, I want to offer thanks to a few people who have been very supportive of our programs at the American Corner in the university’s central library.  Our American Corner here receives over 35,000 visitors a year who come to access the e-libraryUSA database services and participate in the many programs the Corner organizes. We are very appreciative of our close cooperation with ITB’s Director of Education, Dr. Yuli Setyo Indartono, as well as Ibu Lusi and the team at the American Corner.  I hope you have all visited and taken advantage of what your local “window on America” has to offer.

I’m particularly pleased to see a number of women in the audience today, especially as the ITB American Corner has focused on boosting the interest of women in STEM fields.

This is an exciting time…

This year, we are celebrating the 70th anniversary of U.S.-Indonesia ties. So before you get your certificates, I’d like to let you know that you are all “70th anniversary graduates.”  Congratulations!  See, that was easy, wasn’t it?

But of course, the reality is that this day has arrived after lots of work. Hard work.  All of you here know the time, the effort, and probably the tears on occasion, that it took to bring you to this point.  There were surely moments of self-doubt along the way.  And frustration.  And failure.  And yet you persevered, and found success.  So my heartfelt congratulations to you.

In many ways, it is a lot like my job, doing the work of diplomacy. In 1949, our two countries established diplomatic relations.  Over the course of seven decades, our relationship has had its ups and downs.  It has had its doubts, and challenges and frustrations.  But with work — hard work — our relationship has grown into a thriving partnership between two of the world’s most diverse countries, the world’s second and third largest democracies, which are committed to a stable, free, and prosperous Indo-Pacific.

I’d like you to take some time, maybe not today, but later, with family and friends, and think about a word I just mentioned: democracy. Because I think it is very important to the success of our relationship with Indonesia.

I often say that our nations share a similar motto. Bhinneka Tunggal Ika and its counterpart in the United States E Pluribus Unum.  Unity in Diversity and Out of Many, One.  These phrases represent not only the foundational philosophy of our nations, but also of democracy – the fact that people of diverse backgrounds, religions, and viewpoints, can come together voluntarily, bridge their differences, and find common cause as a nation.  This is possible, really, because of democracy and the democratic principles and values that both Indonesians and Americans cherish.

In ten days, Indonesia will put its democracy on display for the world as Indonesians across the country vote for their leaders at all levels. If you have not thought much about it, let me tell you, it is a powerful idea.  The idea that people come together peacefully and express their choice at a polling station, and elect their leaders.

And you may not realize it, but many people have been rooting for you for a long time. Your university. Your teachers. Your friends. Your families.

And like the work of diplomacy, your work is not yet done. In fact, you have much more to do.  And trust me when I tell you, that is a good thing, because you will be doing it in a century that has already witnessed some remarkable changes and will see many more.  Not least among these changes, as many of you know well, are the ways in which technology is changing our lives.

I have heard that the way people talk about technology really reflects how they use it.  I see this all the time from my own team at the Embassy, who are ready to talk about algorithms and data analytics when all I want is to make the font on my screen bigger.  All I can say is, if your parents are as gaptech as I am, please be kind when they come to you for help with their computers.

I don’t have to tell the talented graduates of this university that our two countries are at the forefront of a wave of innovation that is rightly called a new industrial revolution. While the United States is the birthplace of many of the digital technologies that are remaking our world at a tremendous pace, the future of the digital economy is also taking shape here in Indonesia.

In a few short years, Indonesia’s digital economy has become a leader in ASEAN, home to a stable of four unicorns. Indonesian online companies like GoJek, Tokopedia, Traveloka, and Bukalapak are becoming household names like Google, Uber, Facebook, and Apple.

I believe that this is just the beginning, and that Indonesia has the potential to play an even more influential role. You will help Indonesia make a fundamental decision: Is Indonesia ready to open its doors and compete and cooperate globally?

There are encouraging signs. Recently we saw the successful launch of the Nusantara 1 Satellite for Indonesian company PSN.  That satellite was built by SSL, based in California, and launched on a SpaceX Falcon 9 reusable rocket from Cape Canaveral in Florida.  That satellite will bring internet connectivity, and new opportunities for education and business, to thousands of Indonesians.

And this week, an Indonesian delegation, led by the National Institute of Aeronautics and Space (LAPAN) is in Washington D.C. for the first-ever U.S.-Indonesia Civil Space Cooperation Dialogue. Through this dialogue we are looking forward to deepening the partnerships between Indonesia’s space agencies and our top scientists at agencies like NASA and NOAA, as well as the booming American commercial space sector.

Working together, U.S. and Indonesian innovators can change every aspect of our countries’ economies for the better – making farms and factories more competitive, making cities smarter and safer, improving disaster early warning systems, and bringing Indonesia’s 17,000 islands closer together.

As we mark the progress made during the last 70 years, I see even greater opportunities in the decades to come, especially when I look out at the faces of Indonesia’s future in the audience today.

This is where all of you come in. Educational exchange and research have always been an important component of our partnership.  The prestigious Fulbright program has been active in Indonesia since 1952; this year 163 Indonesians are in the U.S. on Fulbright scholarships.

In fact, I learned that the first Fulbright grantee from ITB, way back in 1954, went to MIT. So ITB has a historic connection with both MIT and the Fulbright scholarship program.

Today we continue to put education at the forefront of our relationship. Much of our work in Indonesia involves helping young Indonesians contribute to the 21st century global economy through educational partnerships. We know that training in science, technology, engineering and mathematics are essential to innovation.  It’s no coincidence that these are fields of choice for Indonesian students in the United States.

While almost 9,000 Indonesians are currently studying in the United States, I would like to see this number greatly increase. I know that our universities value the Indonesian students who choose to study in our country, bringing with them your views, your culture, your ambitions for the future and, if we’re lucky, your food!

When you return, you bring new knowledge, new friendships that foster future partnerships, and new ideas to benefit Indonesia. Both of our countries need more of the kind of mutual understanding that results as your generation enters an increasingly competitive global marketplace.

Just as importantly, fostering innovation in the workforce leads to the ideas that fuel economic growth in the years to come. And the United States is investing in the people of Indonesia.  Companies like Google, Apple, Cisco, and Honeywell have trained hundreds of thousands of Indonesian students so that both of our countries can benefit from the tremendous changes that technology will bring to our economies in the years to come.

Let me end with a few final thoughts. Remember that word I mentioned earlier: “democracy”?  It thrives on something that undemocratic societies lack: a commitment by citizens to public service and the public good.

That commitment may take different forms. It may mean working within the government, to do good for the country and community.  It may mean working in the private sector, or using technology, to help fellow human beings solve their problems and increase prosperity.  It may mean being a creator, in whatever discipline you choose, interpreting the joy and wonder of the world we live in so that others may see it too.  It may mean committing yourself to ensuring that technology brings us closer together rather than driving us apart.

In asking you to think about a commitment to public service let me say that we are committed to being your partner and to being Indonesia’s partner, as we look forward to imagine all that we can accomplish together.

Distinguished 70th anniversary graduates. I have full confidence you will contribute to a prosperous future and a better world, and I hope we will see your success both here in Indonesia and in the United States.