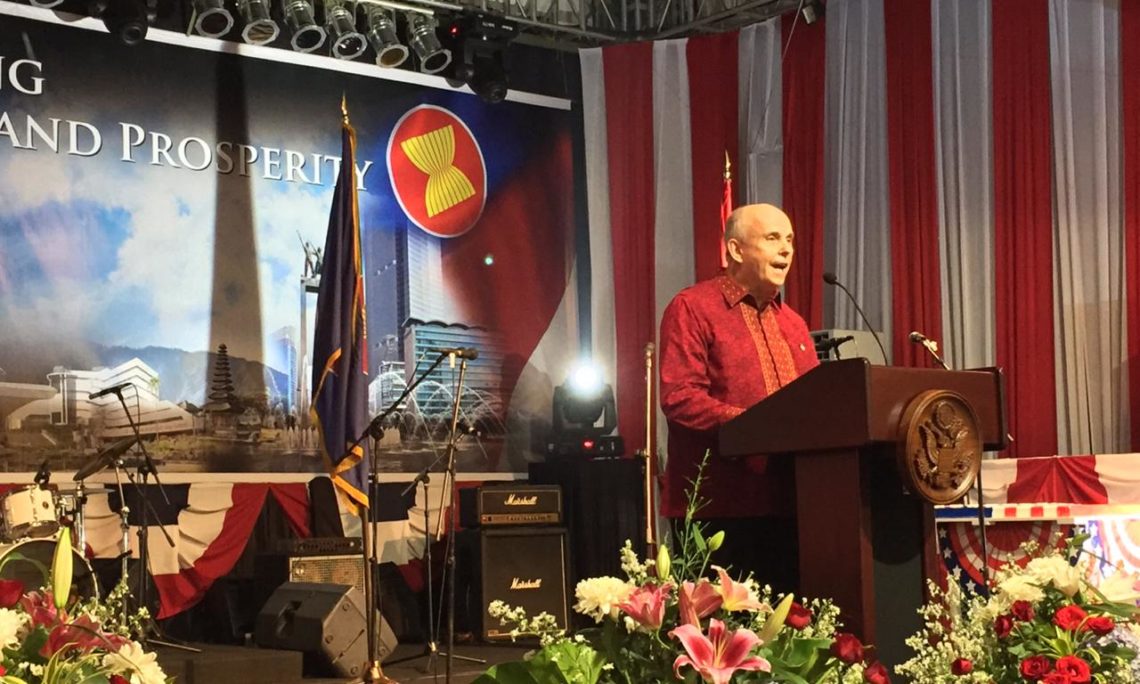 Almost seven decades ago on this day, the first American Ambassador to Indonesia, Horace Merle Cochran, held an Independence Day reception at this residence, six months after he presented his credentials to President Sukarno.  Ambassador Cochran hosted Vice President Hatta in this garden, establishing the foundations of our Strategic Partnership that endures now into the twenty-first century.

That same day, in an editorial in Antara commemorating American independence, Ruslan Abdulgani, who would later become Foreign Minister, described the American Declaration of Independence as “the pioneer of modern democracy.”  Today, as two fellow democracies, we celebrate 243 years of American independence and 70 years of U.S.-Indonesia bilateral relations.  Together we look to the future as we seek to advance our shared interest in a free and open Indo-Pacific.

Bhineka Tunggal Ika and E Pluribus Unum – the mottos of our two countries – underscore Indonesia and America’s founding belief in the strength of diversity.  They also represent a call to deepen the relationship – for unity in diversity also means that Indonesia and the United States are stronger when acting together.

During the past three years in Indonesia, I have seen many examples of how our shared principles lead to shared progress, largely through the work of some amazing individuals.  I consider them the champions of our U.S.-Indonesia partnership.

Take Dr. Kinari Webb, who first came to Indonesia from the United States in 1993 to study orangutans in Gunung Palung National Park in Kalimantan.  There she encountered not only a beautiful and threatened natural environment but also the dire health needs of the people surrounding the National Park.  Dr. Webb was inspired to become a physician and, after medical training in the United States, returned to Indonesia to work with local communities to improve their health and preserve the natural environment.  In 2007, Dr. Webb and her Indonesian partners founded Alam Sehat Lestari in West Kalimantan, an organization that provides affordable healthcare and alternative income sources to local communities and has dramatically reduced illegal logging.  We will be profiling Dr. Webb in an upcoming podcast, and I encourage you all to learn more about her remarkable journey.

Beyond the worlds of business and the environment, there are champions of our U.S.-Indonesia partnership that are saving lives.  Sydney Morton of the American Red Cross came to Lombok last August to support the Indonesian Red Cross, or Palang Merah, in assisting with the response to last year’s earthquakes.  She said that from 2015 to 2017, the American Red Cross and Palang Merah offered preparedness workshops and earthquake safety drills with secondary schools in Lombok.  This type of training ensured that students and their families were better equipped in the worst of circumstances.  As Sydney recalled, Palang Merah’s biggest benefit isn’t just its disaster relief supplies, but its focus on making sure people “feel hope again.”

Finally, while no longer with us, we should never forget the champions who showed immense bravery in defense of our shared values.  Not only is this year the 70th anniversary of our partnership, it is also the 75th anniversary of the rescue of 11 U.S. sailors and airmen whose planes had been shot down over Borneo in November 1944. Local Dayak tribespeople sheltered the Americans shortly after they crashed into what is now North Kalimantan, and later protected them until their final rescue in June 1945.  When a U.S. Embassy team visited the area in March to commemorate the rescue, one of the original Dayak rescuers, now 82, told them that it was the Dayak’s respect for American values of fairness, integrity, and tolerance that motivated this unlikely partnership.

We stand here tonight as the inheritors not just of a 70-year July 4th tradition but of the work of an amazing collection of individuals who found common cause in our shared values and used it to better the futures of our two nations.  We have made tremendous strides since that first July 4th celebration nearly seven decades ago.  Today, as we come together, we celebrate these achievements and look forward to the next seventy years to come.