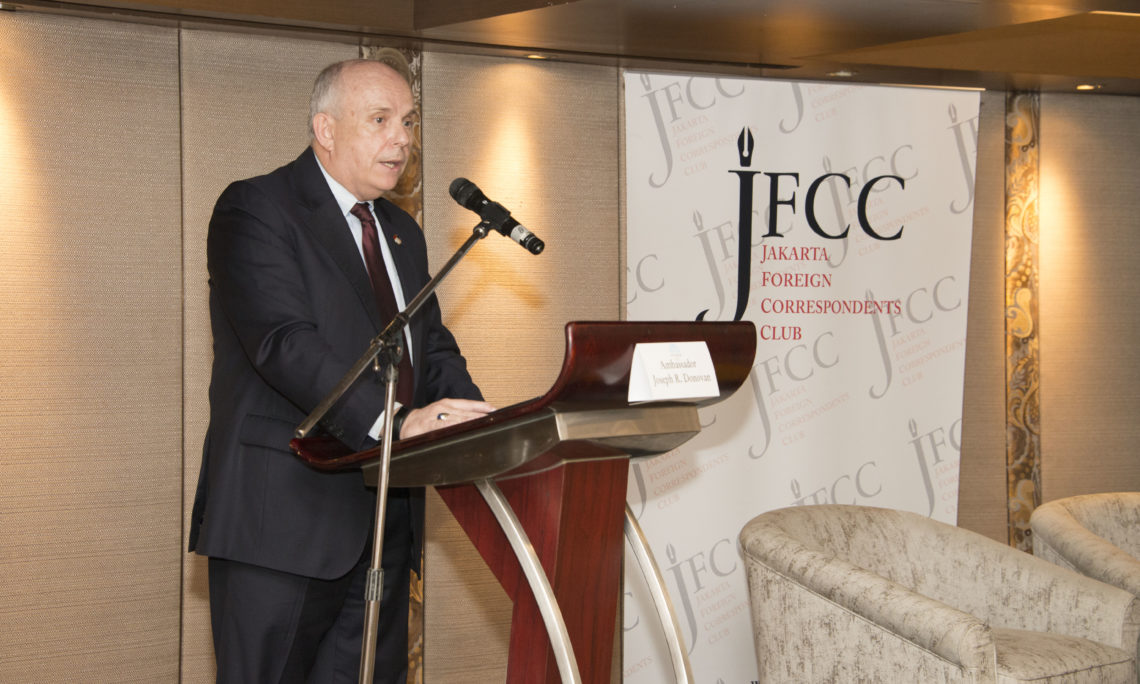 Good morning!  It’s a pleasure to be back at the Jakarta Foreign Correspondents Club (JFCC).  As Indonesia’s leading organization for international journalists, JFCC deserves credit for facilitating thought-provoking discussions on contemporary issues and contributing to Jakarta’s vibrant media landscape.  Thank you for the opportunity to speak about the 70th anniversary of bilateral relations between Indonesia and the United States.  This is an important year for our two countries, and I want to share with you some thoughts about the 70th anniversary and the partnership between our two countries.

During his first visit to Indonesia in August of 2018, Secretary of State Pompeo and Foreign Minister Marsudi underscored the importance of the 70th anniversary.  From their conversations also came the theme of the 70th anniversary year: “Celebrating diversity, partnership, and prosperity” — a phrase that highlights the shared values and ideals at the heart of our relationship.

Today, I am going to try something different.  This is a knowledgeable group so I’m not going to bore you with statistics about our relationship.  Instead, I want to share some stories which illustrate these values and provide some little known insights into the U.S.-Indonesia Strategic Partnership.       First, I want to emphasize that our ties include much more than what our governments do together.  It’s about our private sectors, it’s about NGOs, and more than anything else, it’s about people, Indonesians and Americans, making a difference.  That’s what the 70th is all about.

In my two and a half years here, I have had the pleasure of meeting Indonesians across this nation.  And I have been struck by the scale of Indonesia’s diversity and how much our two countries have in common.  Both of our peoples recognize and celebrate the multicultural foundations of our nations.  Our shared respect for the multitude of traditions and viewpoints within our societies that not only strengthens our institutions, but also serves as a model and inspiration for others.

Allow me to begin with a look into the future, with a glimpse of what young Indonesians are doing today.   More than 35,000 young Indonesians participate in YSEALI, the Young Southeast Asian Leaders Initiative.  Launched in 2013, YSEALI is our signature program to strengthen leadership development and networking in Southeast Asia.  Through a variety of programs, including U.S. educational and cultural exchanges, regional workshops, seed funding, and professional and academic fellowships to the U.S., YSEALI seeks to build the leadership capabilities of youth in the region, strengthen ties between the United States and Southeast Asia, and nurture an ASEAN youth community.  It focuses on critical topics identified by youth in the region such as civic engagement, sustainable development, education, and economic growth.  For example, last year, we hosted the YSEALI Marine Debris Expedition in Jakarta in which 60 young leaders from all ASEAN countries came together and acquired hands-on experience in preventing and combatting marine debris.  The organizers of the annual international Our Oceans conference were so impressed that they asked the winning team to present its solutions at last year’s conference in Bali. We invest in these young leaders because the future belongs to them.  We firmly believe the youth of Southeast Asia are leading the way toward a brighter future.

Here in Indonesia, both President Jokowi and Finance Minister Sri Mulyani have also emphasized building Indonesia’s human resource capacity.  That means making strides in vocational and higher education to prepare Indonesia’s young people for the 21st century global workforce.  While the number of Indonesians studying in the United States over the past few years has been around 9,000 and the highest in over a decade, I echo the sentiments of my Indonesian counterparts when I say that we need to do better.

You may think I’m biased, but I believe that American universities offer the best education in the world, across disciplines and fields of study.  We want to work with the Indonesian government to expand the Indonesia Endowment Fund for Education or LPDP so it includes more U.S. universities and promotes policies that will increase scholarship and educational opportunities and partnerships in the United States.

For learning outside the traditional classroom, some of our most popular programs and exciting partnerships take place at @america, our one-of-a-kind program and cultural center in Jakarta, as well as nine other centers across Indonesia.   Since 2008, over two million people have visited these centers, participating in nearly 15,000 programs connecting Indonesia and the United States.

Our educational partnerships with Indonesia are as important as those that focus on key aspects of development such as people’s livelihoods.  During a recent trip to Morotai in North Maluku, I met local communities who depend on natural resources to survive – and thus, have a huge stake in their protection and sustainability.  I visited a USAID-supported tuna processing facility that’s allowing artisanal fishers to earn more for their catch while at the same time reducing illegal fishing in Indonesian waters.  Marine conservation and local fisheries are engines for development, and so we are working with small-scale fishers and businesses across the country to ensure that Indonesia’s fisheries remain healthy and productive.

We also collaborate with Indonesia on human health, something fundamental to individual quality of life as well as national economic growth and poverty reduction.  Recently, a young tuberculosis (TB) survivor named Alfiyah shared with me her 9-month long ordeal and the impact it had on her family.  Her story reminded me of our obligation to prevent and detect TB and that is exactly what we are doing through USAID’s work in this field. In March this year, I joined officials from the Ministry of Health and the Governor of Central Java in Borobudur to commemorate our joint efforts to reduce tuberculosis (TB), a fight that has benefited more than 700,000 Indonesians suffering from TB.    As we celebrate 70 years of bilateral relations, we look forward to working with local partners in making Indonesia TB-free by 2030.

When communities can look beyond just meeting their basic needs, they improve their livelihoods, they educate and innovate, and they solve larger challenges facing our world.

The United States is the birthplace of many digital technologies, but to anyone who has visited Jakarta it is all too evident that the future of the digital economy is taking shape here in Indonesia.

In a few short years, Indonesia’s digital economy has become a leader in ASEAN, home to a stable of four unicorns.  Indonesian online companies like GoJek, Tokopedia, Traveloka, and Bukalapak are becoming household names like Google, Uber, Facebook, and Apple.

Earlier this year I attended a graduation ceremony for the first batch of students at Apple’s App Developer Academy in Tangerang.  While the facility was state-of-the-art, even more impressive were the 166 graduating students who highlighted the tremendous talent here in Indonesia through the mobile applications they developed for e-health, education, and e-commerce.

Google has also committed to helping build up the talent of the Indonesian workforce with digital literacy and skills training to address the shortfall of 600,000 workers every year in the digital economy.  Just think about the opportunities that means for Indonesia, and even the sky is not the limit……as we recently saw the successful launch of Indonesia’s Nusantara Satu satellite, built by a California company, and launched on a SpaceX rocket from Cape Canaveral in Florida.

Working together, U.S. and Indonesian innovators are changing every aspect of our countries’ economies for the better – making farms and factories more competitive, making cities smarter and safer, and creating new partnerships.

Speaking of partnerships, this year we are working with the American Chamber of Commerce to study the totality of our economic partnership and devise recommendations for moving it forward.  We know that trade and investment is a key driver to any country’s growth, and in 2018, bilateral trade with Indonesia was more than $29 billion.   We’re in the process of updating where this relationship stands and taking stock of the role that U.S. investments play in sectors such as fintech, health and pharmaceuticals, creative industries, and renewable energy.

For example, the United States supported Indonesia’s first wind farm with a $120 million loan.  A U.S. private sector company, UPC Renewables, developed the project in South Sulawesi and is already looking to expand to add even cleaner, reliable energy for tens of thousands of households in the area.  USAID’s Indonesia Clean Energy Development program, a five-year $17 million program, is also assisting national utility PLN and the Energy Ministry in growing the amount of wind and solar power in Indonesia.  With energy demand growing 7-10 percent annually, Indonesia is at a critical crossroads regarding its energy sector development, and we are pleased to be able to support Indonesia as it works to realize its full energy potential.

The United States and Indonesia have another opportunity to increase our cooperation, and that’s in a second Millennium Challenge Corporation Compact with Indonesia.  You may recall that we successfully concluded our first compact last year.  In that compact we committed $400 million dollars to three different areas — combating childhood stunting, procurement modernization, and renewable energy – all priorities identified by our Indonesian partners.  We are now in the process of developing a second compact to address the key constraints to economic growth and poverty reduction.

Finally, as we return to look at our partnership here in Jakarta, some of you may recall the recent visit of Acting Secretary of Defense Shanahan, and the May port visit of the USS Blue Ridge, the flagship of the U.S. 7th Fleet.  Ships like the USS Blue Ridge have visited Jakarta for decades, participating in joint exercises and community service.  The last group – featuring the 7th Fleet Band – even performed on Indonesia NET TV’s Tonight Show!  It’s fair to say that U.S.-Indonesia security cooperation has never been more comprehensive.

Through these visits and exercises, we increase our joint preparedness and capacity, such as responding to disasters, where U.S. expertise, whether it involves early warning systems, lift capabilities, or disaster education, can help save lives.  In October last year, I visited the resilient communities affected by the earthquakes and tsunami in Palu in Central Sulawesi.  In cooperation with our Department of Defense and many local partners, including the Indonesian Red Cross and World Vision Indonesia, the U.S. Government provided over $6.7 million in disaster relief through USAID’s Office of Foreign Disaster Assistance.

I’d like to conclude by offering you a glimpse of this partnership through the recently launched 70th Anniversary Digital Platform – www.indonesiausa70th.com – that I encourage you to visit and explore.  It provides a good overview, in pictures and words, of the relationship between Indonesia and the United States – highlighting the places, stories, and dreams that showcase our broad partnership with Indonesia.  The Digital Platform is a visual reminder that our relationship is a celebration of the people-to-people connections that are the foundation of our strong partnership. The work our citizens are doing side-by-side, and tackling the challenges of the 21st century.   Thank you very much.