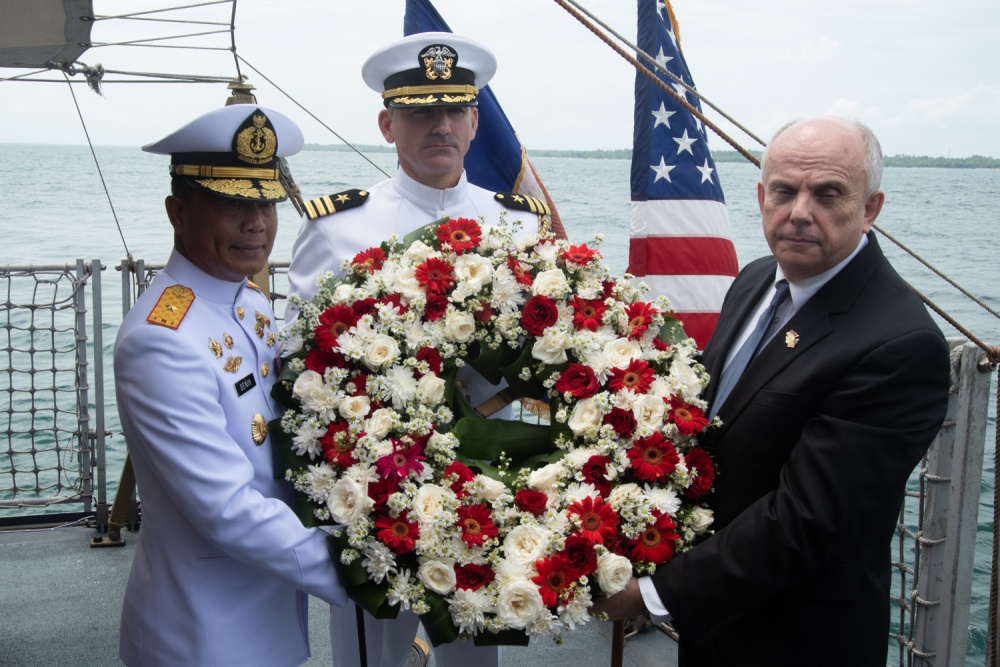 Distinguished guests and friends from the Indonesian, Australian, and U.S. Navies, thank you for your participation on this very important occasion and for joining us to mark this important date in our shared histories.

I would first like to thank our special guests here today, the crew of the USS Chief, who sailed their ship all the way from Sasebo, Japan to participate in this ceremony – thank you for your attendance and for helping us commemorate the lives and sacrifices of our fellow Americans. The commitment of the U.S. Navy, and that of the U.S. Seventh Fleet, to sail the USS Chief to Jakarta expresses the importance the American government places on this commemoration activity and the importance of this site as the final resting place for as many as 600 American heroes.

It is a distinct honor to be here with you on this special day of remembrance.  Being here at the site of the USS Houston is one of the greatest honors I have while serving as Ambassador to the Republic of Indonesia. It is especially poignant to be here with you today as we celebrate 70 years of diplomatic relations between the United States and the Republic of Indonesia.  By commemorating this important naval battle, we are also commemorating the end of World War II, an event that put many nations around the world, including Indonesia, on an eventual path to independence. The United States is proud to be celebrating 70 years of diplomatic ties with Indonesia and a Strategic Partnership built on a foundation of shared democratic values and common interests.

We are grateful to the leadership of Panglima TNI Air Chief Marshal Hadi, Kasal Admiral Siwi Sukma Adji, Minister of Marine Affairs and Fisheries Susi Pudjiastuti, and the Banten Government for their commitment to protecting this site.  We are especially grateful for Minister Susi’s unwavering commitment to designating the site of the USS Houston a Maritime Conservation Zone.  We continue to support Minister Susi and KKP’s mission to designate the site of Houston and all foreign warships considered historical wrecks in Indonesia’s waters as Maritime Conservation Zones, and we are extremely proud that Houston’s eternal partner, Perth was the first ship to receive this designation during this commemoration ceremony last year.

The sites of the USS Houston and HMAS Perth are deserving of the same respect and reverence alongside the most significant battles of World War II.  We do not gather here today to glorify war, rather to remember the cost of war, in hopes that our world never has to endure such pain and suffering again.  These are also important lessons to remember as we approach the 75th anniversary of the end of World War II–next year–and reflect on the human cost of war.  This sacrifice is never more evident than after meeting the Perth families gathered with us today to remember and honor their loved ones.  Thank you to Mr. George Hattfield Jr. and Ms. Dawn Manning for making the trip to Banten to be with us today.

696 American men were lost in these waters just after midnight on March 1, 1942 — many of them fighting their ship until the very end.  Many Houston and Perth Sailors remained at their battle stations, even while their ships slipped beneath the waves — and many of them have remained here for the last 77 years, ever vigilant, ever courageous and steadfast.  When the news of the Houston’s sinking reached the town of Houston, Texas, American citizens freely gave of their own money to build a new USS Houston to rejoin the war, and many mothers and fathers sent their sons to join the U.S. Navy to man this new USS Houston to avenge the death of their loved ones.

The 368 Houston Sailors that survived the sinking of their ship continued to resist while in captivity in Java, Singapore, Burma, Thailand, and Japan – until the end of the war when 291 Houston Sailors returned home as heroes.  Not a year has passed since 1945 when the Houston Survivors Association, and now the next generation of Houston survivors haven’t gathered in the city of Houston to remember their ship and its brave crew.  This year is no different.

In the next few days, hundreds of family members and friends of the crew of the Houston will gather in the city of Houston, Texas—which is well over 10,000 miles from here–to commemorate the same great battle we are gathered here to remember: the Battle of the Sunda Strait.  The three remaining spouses of Houston crewmembers will lay a wreath, much like we are doing here today.  Americans will gather to remember the fallen, will recognize the families of the survivors – and then their thoughts will turn to Indonesia.  Although many of the surviving families have never traveled to this country, they will always feel connected to Indonesia.  They will try to imagine this scene of beautiful islands, they will wonder how their loved ones fought, how they died, and how they survived the challenges that faced them until their return home.  Although you may never meet these families back in the United States, they recognize and appreciate your support and contribution to the protection of the final resting place of their loved ones.  They will highlight the important work you all have done when they come together in the city of Houston.  They will thank you, they will encourage you, they will pray for you.  Let us not forget the sacrifice of these brave warriors.