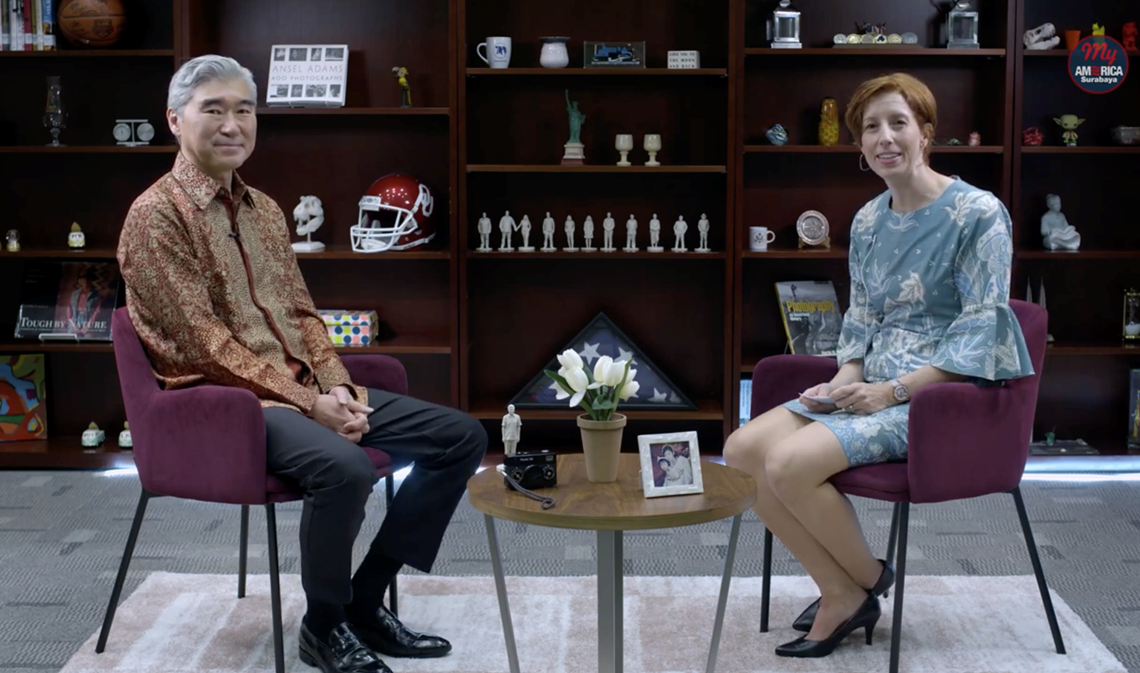 SURABAYA – U.S. Ambassador to Indonesia Sung Y. Kim is the guest in the ninth episode of the “CurioUS” video podcast which can be watched on the U.S. Consulate General in Surabaya’s YouTube channel (bit.ly/CurioUS_Episode9). The episode premiered on Sunday, December 5, 2021, at 2:00 p.m.

CurioUS is a video podcast series from the U.S. Consulate General in Surabaya that engages in honest and open conversations about U.S. diplomats’ lives and experiences. Audience may also watch the previous episodes of CurioUS at bit.ly/CurioUS_YouTubePlaylist.

“I’m incredibly privileged and honored to be serving as the U.S. Ambassador to this great country, Indonesia. It is an important relationship for both countries, and I am thrilled to be working here,” Ambassador Kim said. He continued, “I hope that during my time here we will be able to deepen our ties, both in terms of economic partnership but also in terms of strategic partnership.”

Ambassador Kim also highlighted specific areas of cooperation between the United States and Indonesia, including trade, investment, security, climate change, and addressing the global pandemic. “I am grateful the U.S. has taken a lead in dealing with the pandemic. We are the largest contributor to the COVAX vaccine effort,” said Ambassador Kim.

In addition to discussing U.S.–Indonesia diplomatic partnership, this episode also shows a personal Ambassador Kim. “During this episode, you will learn why Ambassador Kim wanted to become a diplomat. He talks about his hobbies, family, and an amazing collection of cameras,” said Angie Mizeur, Public Affairs Officer of the U.S. Consulate General in Surabaya. “CurioUS viewers will also be surprised about the musical group he wants to join. Viewers can obtain prizes if they ask the best questions in the comments section,” she continued.

Ambassador Sung Kim has served as U.S. Ambassador to the Republic of Indonesia since October 2020. In May 2021, President Biden named Ambassador Kim to serve concurrently as U.S. Special Representative for the DPRK. He also served as acting Assistant Secretary of State for East Asian and Pacific Affairs January-June 2021.

Ambassador Kim was born in Seoul, South Korea, and grew up in Los Angeles. He studied at University of Pennsylvania (BA), Loyola University (JD), and London School of Economics (LLM), and has received honorary doctorates from the Catholic University of Korea and the Holy Name University of the Philippines. Ambassador Kim is married and has two daughters.

For more information about CurioUS, contact the Public Affairs Section U.S. Consulate General in Surabaya via phone at +62 (31) 2975300 or via email passurabaya@state.gov.