In partnership with the Indonesia Anti-Counterfeiting Society (MIAP) and the Food and Drug Agency (BPOM), the Ambassador launched a new “Safe Medicines and Cosmetics” public service announcement (PSA) contest at @america on February 26. During opening remarks to a packed house of government officials, private sector stakeholders, media, and students, the Ambassador called on young Indonesians to develop creative and effective PSAs to help raise Indonesian consumers’ awareness of the dangers of counterfeit drugs, and stressed that access to safe, genuine medicine is both a public health and an intellectual property rights issue. Representatives from MIAP and BPOM discussed the need to address supply-side issues through heightened law enforcement activities and demand-side issues through public awareness campaigns like the PSA contest. With support from the Embassy, MIAP’s PSA contest will challenge young Indonesians aged 18 to 25 to create short video messages about the dangers of counterfeit medicines. In the next two weeks, MIAP will hold workshops in partnership with local universities in four cities across Java and Sumatra to help equip participants with the skills to create effective PSA messages. Winners of the contest will be announced during an event at @america on May 20. 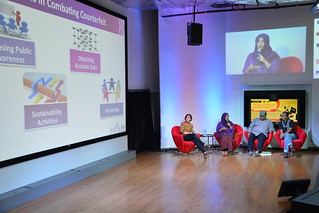