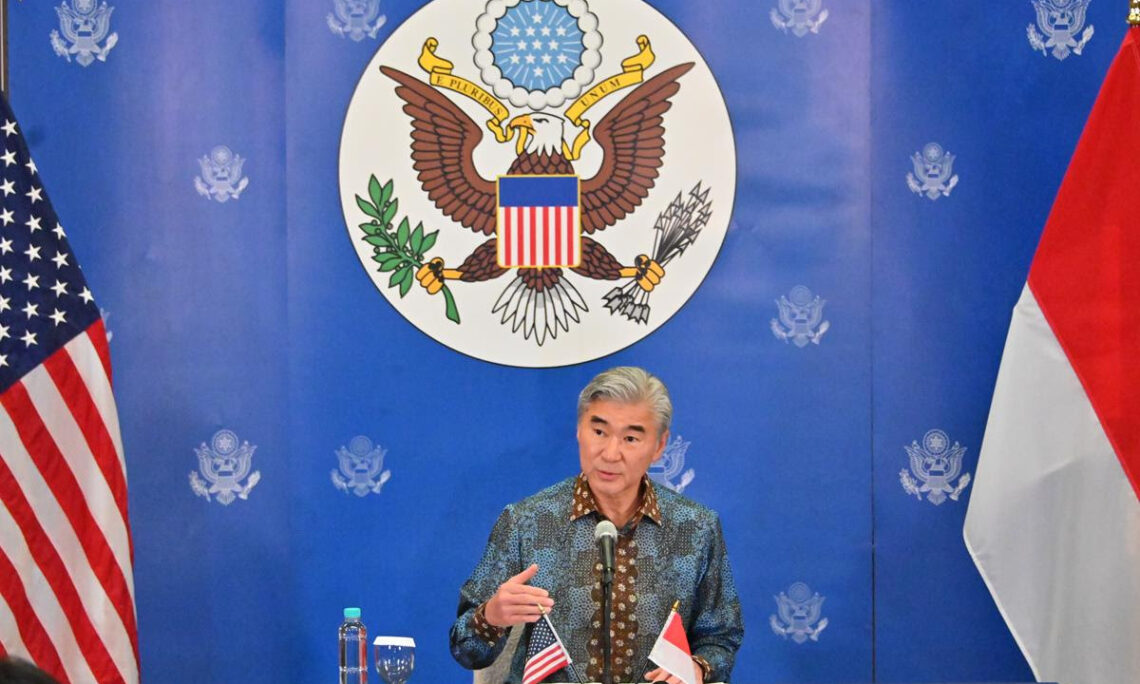 Welcome everyone – thank you all for coming.

I want to begin today by congratulating the government of Indonesia on its historic and successful G20 year.  With so many achievements on the global stage, it is clear: Indonesia’s G20 host year was a triumph.

Today I’ll touch on a few important accomplishments that I’m proud to say we achieved together: 1) tackling climate change; 2) strengthening our economies; 3) and deepening our strategic partnership – and doing it all in the face of some very difficult challenges.

At the Partnership for Global Infrastructure and Investment event in Bali on November 15, Presidents Biden and Jokowi showed the world how we will recover together and recover stronger.  G7 countries are mobilizing $600 billion by 2027 for investments in sustainable, transparent, and quality infrastructure in low- and middle-income countries.

Presidents Biden and Jokowi, along with Japanese Prime Minister Kishida and other leaders, also announced the launch of the Just Energy Transition Partnership – also known as “JET-P” – with Indonesia.  This is a landmark, long-term partnership designed to support an ambitious and fair power sector transition in Indonesia.

Why is this so important?  In short: JETP will shrink Indonesia’s funding costs and unlock massive amounts of potential private capital.

This historic $20 billion financing package will make it possible for coal decommissioning projects and renewable energy projects to go forward.  The cost of funding infrastructure projects in Indonesia has been quite high, which has limited the country’s growth and transition to new green technology.

JETP’s concessional loans – with favorable interest rates and terms – and financial guarantees will significantly reduce financing costs for Indonesia – and, along with grants and private sector funding, will facilitate Indonesia’s energy transition without creating a fiscal burden.

As JETP jump starts Indonesia’s clean energy future, it will not just deliver strong emissions reductions, it will also drive sustainable economic growth while protecting the livelihoods of communities and workers in affected sectors.

Together, we are accelerating Indonesia’s transition to a modern, green economy.  Renewable energy is the future. These investments are critical and timely — and they will have long-lasting benefits for all Indonesians.

I also want to commend Indonesia’s G20 leadership around strengthening global health architecture, including the launch of the Pandemic Fund, which will create a healthier and safer world.  The United States was proud to pledge $450 million to help close the global gap in financing for pandemic preparedness.

Hosting a major international event like the G20 during a pandemic is not easy.  All credit to Indonesia for making smart public health decisions, and respecting the needs and rights of its citizens, while also managing to lay a solid foundation for economic recovery.

I’m proud that the U.S.-Indonesia partnership has remained strong throughout.  America gave more than 40 million vaccines to the people of Indonesia, and as the largest COVAX donor, we helped provide over 100 million total doses to Indonesia. Indonesia moved toward vaccine self-sufficiency in 2022 — and it happened through a collaboration with a U.S. medical school and research center.  Partnering with the Baylor College of Medicine in Houston Texas, Indonesia’s Bio Farma launched IndoVac, Indonesia’s first domestically produced COVID-19 vaccine.

This year we also witnessed an unnecessary tragedy, as Vladimir Putin’s invasion of Ukraine brought unspeakable suffering to the people of Ukraine, and then darkened the global outlook with rising energy prices and food insecurity.

I would like to commend Indonesia’s stand against Russian aggression with its recent UN vote condemning Russia’s annexation of Ukrainian territories.  And I also want to congratulate Indonesia on its deft global leadership to foster a productive G20 dialogue on urgent matters: among them food insecurity, global health, as well as climate change, and ensuring inclusive economic growth.

Because those are the key challenges we’re facing, and they are where the U.S. Indonesia strategic partnership is focused.

On the economy, I am pleased that Indonesia has decided to participate in all four pillars of the Indo-Pacific Economic Framework, or IPEF.  A new economic era requires new approaches.  IPEF will set standards for the digital economy, securing supply chains, managing the energy transition, and investing in quality, modern infrastructure.

The United States, Indonesia, and other IPEF partners are working together on crafting each pillar and defining concrete benefits for IPEF partners to complement these high standards. So, in short, we are working together to create the conditions needed for sustainable success – and U.S.-Indonesia bilateral trade and investment is on the rise.  The United States has already risen to be the fourth largest investor in Indonesia, and our two-way goods trade increased in 2021 by over 30 percent.

Our people-to-people cooperation is also flourishing.  Through USAID we are supporting LPDP programs to ensure that more Indonesian scholarship awardees get more opportunities to study in the United States, home of some of the best universities in the world.  And we have now allocated resources for a 30% increase in educational advising centers in Indonesia.

In addition, Peace Corps volunteers and Fulbright scholars and teachers will return to Indonesia in January of 2023, after a multiyear hiatus caused by the COVID-19 pandemic.Our defense relationship is the cornerstone of the U.S.-Indonesia strategic partnership.  This year’s Garuda Shield exercise was full of historic firsts – a SUPER Garuda Shield indeed.  We are proud to be Indonesia’s largest defense partner and to work with Indonesia toward its defense modernization goals and joint interoperability.

And now, as this very busy G20 year ends, Indonesia’s ASEAN presidency year is beginning.  We are entering a new era of cooperation with the launch of the U.S.-ASEAN Comprehensive Strategic Partnership. We are excited and ready to support Indonesia during another historic year.

Please find the links below for additional information on: