As part of Mission Indonesia’s ongoing outreach efforts during Ramadan, the Ambassador welcomed about 200 senior Muslim leaders to his residence for an Iftar (fast breaking) on the evening of Wednesday, June 24.  Ali Musthafa Yaqub, the Grand Imam of Istiqlal National Mosque, joined the Ambassador in giving remarks highlighting the friendship between the Embassy and Indonesia’s Islamic community.  During his remarks, the Ambassador praised Indonesia’s tolerant, moderate version of Islam, and encouraged Indonesian Muslims to play a more prominent role promoting tolerance and moderation internationally.   The White House also featured a photograph of President Obama and First Lady’s visit to Istiqlal Mosque—a picture featuring Imam Yaqub—at the President’s annual Iftar on June 22. 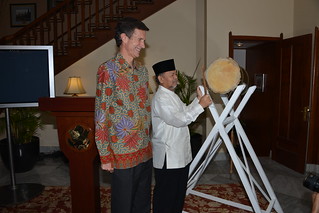