On January 18-19, Charge d’Affaires Kristen Bauer welcomed more than 1,400 visitors to @ameri-Con 2014, the U.S. Embassy’s annual comic convention or comic-con. This two-day event brought together comic book lovers, costume players (cosplayers), fan-based clubs, and the general public for seminars, presentations, toy displays, gaming, and costume performances. The highlight of the event was the cosplay competition, where 6-year-old Ignatius dressed as Iron Man won the first place prize, beating out Darth Vader, Snake Eyes, two other Iron Men, and even Captain America. Speaking at the event, Charge Bauer highlighted, “@america is the realization of President Obama’s goal to deepen ties between young people in the United States and Indonesia. We think a comic-con is one way we can deepen ties between our people–young and old.” 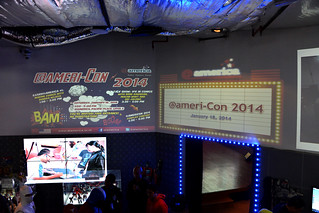