On the evening of July 8, Ambassador Blake hosted a buka puasa highlighting environmental and economic cooperation between the U.S. and Indonesia.  Guest speaker Deputy Minister of Environment Rasio Ridho Sani spoke passionately about the need for a united global community focus on environmental issues such as climate change and pollution.  He hailed the spirit of cooperation between the two countries, highlighting the many sectors in which the U.S. EPA is assisting the Ministry of Environment, including hazardous waste remediation, air pollution, and environmental impact assessment.  Ambassador Blake noted that Indonesia and the U.S. are working to reduce greenhouse gas emissions,  and that our environmental cooperation can have economic benefits for both countries through promotion of green technology and renewable energy. The diverse and lively group of almost 200 attendees included representatives of the Ministries of Environment, Health, Forestry, Marine Affairs, and Energy and Mineral Resources as well as many leading NGO’s such as Greenpeace, KPBB, and Blacksmith. 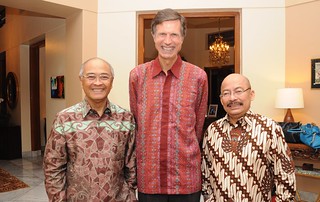