On August 21 at @america, Ambassador Blake hosted students and teachers from the International Islamic Education Center (IIEC), a group of three prominent and progressive Islamic boarding schools in Jakarta, for a pre-departure briefing ahead of their trip to the United States. In his remarks, the Ambassador wished them a successful six-week immersion in the U.S. and encouraged the students to consider studying in the U.S. in the future  The students and teachers also participated in seminars on American culture and Muslim life in the U.S. conducted by Embassy staff. Programs like these are part of the Embassy’s continuous effort to deepen people-to-people ties between the U.S. and Indonesia and help to double the number of Indonesians studying in the U.S. 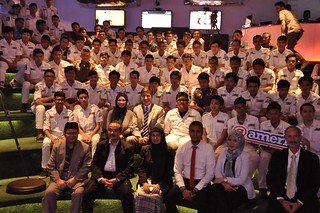