On the afternoon of December 22, Ambassador Blake and United States Agency for International Development (USAID) Mission Director Andy Sisson commemorated Indonesian Mother’s Day with a visit to the emergency room and maternity ward of Budi Kemuliaan Hospital​.  The visit​ highlighted​ the hospital’s lead mentorship role in USAID’s $55 million Expanding Maternal and Neonatal Survival (EMAS) program,  in which they work with other public and private health care providers in district, cities and provincial hospitals to reduce maternal and newborn mortality.  In addition to observing an emergency obstetrics drill and touring hospital wards, the Ambassador addressed a community focus group discussion and emphasizing the importance of information sharing, medical mentorship, and good maternal health practices promoted by RS Budi Kemuliaan and the other EMAS hospital partners. 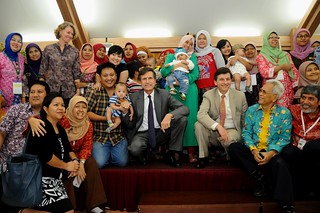