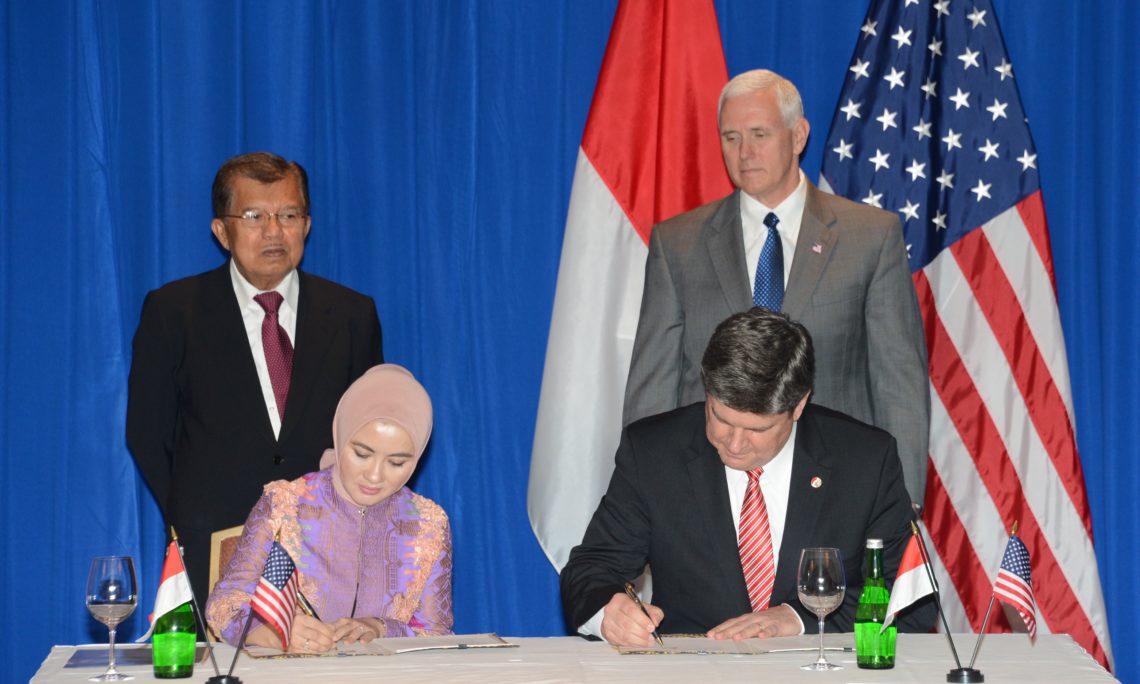 Vice President Mike Pence and Indonesia Vice President Jusuf Kalla celebrated over $10 billion dollars in trade and investment agreements that demonstrate the strength of the U.S.-Indonesia economic relationship. The deals include the delivery of cutting-edge U.S. technologies to help meet Indonesia’s energy needs and process waste into valuable byproducts. U.S. companies are also supporting Indonesia’s desire for cleaner energy with the development of geothermal resources and the long-term supply of LNG. The procurement of U.S. high technology equipment will improve Indonesia’s ability to provide affordable and renewable energy. Two agreements were also signed to enhance aviation and defense cooperation. The agreements will contribute to economic growth and create jobs in both countries.

“Today, on President Trump’s behalf, I had the honor to join Vice President Kalla and American and Indonesian businesses as they signed historic agreements that will draw our nations closer together and benefit both our people,” said Vice President Pence. “These deals represent the tremendous excitement that American companies feel about opportunities in Indonesia. This truly is a historic day for the U.S.-Indonesia economic partnership.”

Exxon Mobil
ExxonMobil signed a contract to sell 1 million tons per year of liquid natural gas to Pertamina, a state-owned oil and gas company, for 20 years, commencing in 2025.

General Electric
GE and its partners have already commissioned 600 MW under the 35,000 MW plan and have been selected as the technology provider for additional 2650 MW. This includes the world’s most efficient power turbine, the 9HA, which helps reduce Indonesia’s cost of power, save fuel, and reduce carbon emissions.

Greenbelt Resources
Greenbelt Resources [OTC:GRCO] and Jababeka Infrustructur signed an agreement to jointly develop a waste-to-resources facility in Jababeka called JababECO. The ECOsystem project will utilize proprietary cutting-edge U.S. technology to demonstrate a sustainable circular economy by processing municipal food waste into a variety of resources (including ethanol, animal feed, fertilizer and distilled water). Total project value of phase one technology is $4.5M with an additional product sales value of another $6.0M cumulatively over the next five-years.

Halliburton
Halliburton and PT Perusahaan Listrik Negara (PLN) have entered into two agreements to develop Indonesia’s geothermal resources. In February the two companies signed a US$ 34 million contract for Integrated Project Management to jointly drill and complete geothermal wells at Tulehu, Ambon. Secondly, the two firms have signed an agreement to form a long-term strategic alliance for Geothermal Energy Development. Under this framework the two companies will jointly develop PLN’s geothermal concessions including potential investment from the United States.

Honeywell
Honeywell has been selected by PT Dirgantara Indonesia (PTDI) to supply 34 TPE331 turboprop engines for its NC212i aircraft over the next four years. These engines will support PTDI’s NC212i aircraft with enhanced capabilities. In addition, Honeywell will provide complementary TPE331 training for PTDI engineers to promote line-maintenance skills and to transfer technical knowledge to locally based companies. This agreement will further strengthen the capabilities of PTDI as an aircraft manufacturer in the region, and at the same time, the project will create jobs back in the United States.

Lockheed Martin
Under this agreement, the Indonesian Air Force will acquire Lockheed Martin’s Sniper Advanced Targeting Pods (ATP). This state-of-the-art technology for the F-16A/B fighters stationed at Iswahyudi Air Base will enhance Indonesia’s maritime and territorial defenses while operating seamlessly with the United States and other regional partners. Lockheed Martin will produce Sniper ATPs at its Missiles and Fire Control facility in Orlando, Florida, and work closely with the Indonesian Air Force to train a cadre of pilots and maintainers.

NextGen
NextGen entered into an initial Memorandum of Understanding with Samarinda Municipality, East Kalimantan to develop an 800 ton per day low carbon waste-to-electricity/bio-char fertilizer project. The facility will process municipal solid waste into 18 MW of electricity and bio-char organic fertilizer for local agriculture. Total project value will be US$ 70 million. It will be built, owned and operated by NextGen and its partners with private financing. The MOU will provide a framework for the project development and financing process, and will be followed by a final waste-processing agreement to be entered into between Samarinda Municipality and NextGen’s project company. The project will also include a co-located indoor farming facility developed by U.S.-based Endless Sky Low Profit Limited Liability Company, which will be operated by a new social enterprise to provide employment for waste scavengers currently active at the municipal landfill. This project is likely to be the first low carbon waste-to-energy gasification facility under operation in Indonesia.

Pacific Infra Capital LLC
Pacific Infra Capital LLC and its Indonesian affiliate PT Infra Cerdas Indonesia, have entered into an agreement with PT Perusahaan Listrik Negara (PLN) to implement an Advanced Metering Infrastructure system in Indonesia. The Project will start with a first phase pilot of 1,000 meters in Bali, followed by a second phase of up to 4.5 million meters using efficient smart-metering technology throughout the Java-Bali grid. The project will utilize cutting-edge U.S. technology from a consortium of companies including General Electric, Siemens USA, eMeter, Trilliant and others. Total project value will be US$ 2 billion with turnkey development and financing from Pacific Infra Capital.

PowerPhase
PowerPhase has entered into an agreement with subsidiaries of PT Perusahaan Listrik Negara (PLN) to deploy its patented Turbophase product for increasing efficiency and output on existing gas fired power plants. The agreement outlines a phased implementation plan beginning with a feasibility study followed by an initial 100MW project with a vision to a full implementation of 2,000 MW. These projects will utilize cutting-edge U.S. technology to dramatically improve the efficiency and power output of existing turbines while improving the environmental emissions profile. The project will utilize a full turn-key approach including financing from PowerPhase. Total project value will be US$ 80 million for phase one and an estimated US$ 1.6 billion for full scale. The full implementation will save Indonesia US$11.6 billion in electrical generation costs over 20 years.

Ormat
Ormat Technologies Inc., an American company headquartered in Reno, Nevada, and their partners, are celebrating the first phase 110 MW commissioning of the Sarulla, North Sumatra geothermal power plant. Once fully developed, the project will generate a total of 320.8 MW of power, with a total project value of US$ 1.7 billion, of which US$ 260 million will be the value of the equipment supplied by Ormat to the project. The Sarulla Geothermal Project utilizes environmentally-friendly technology, assuring optimal and sustainable utilization of the geothermal resource to deliver to Indonesia clean, cost effective and baseload capacity. This project, one of the world’s largest geothermal power plants, is supporting and creating both U.S. and Indonesian jobs in clean technology.