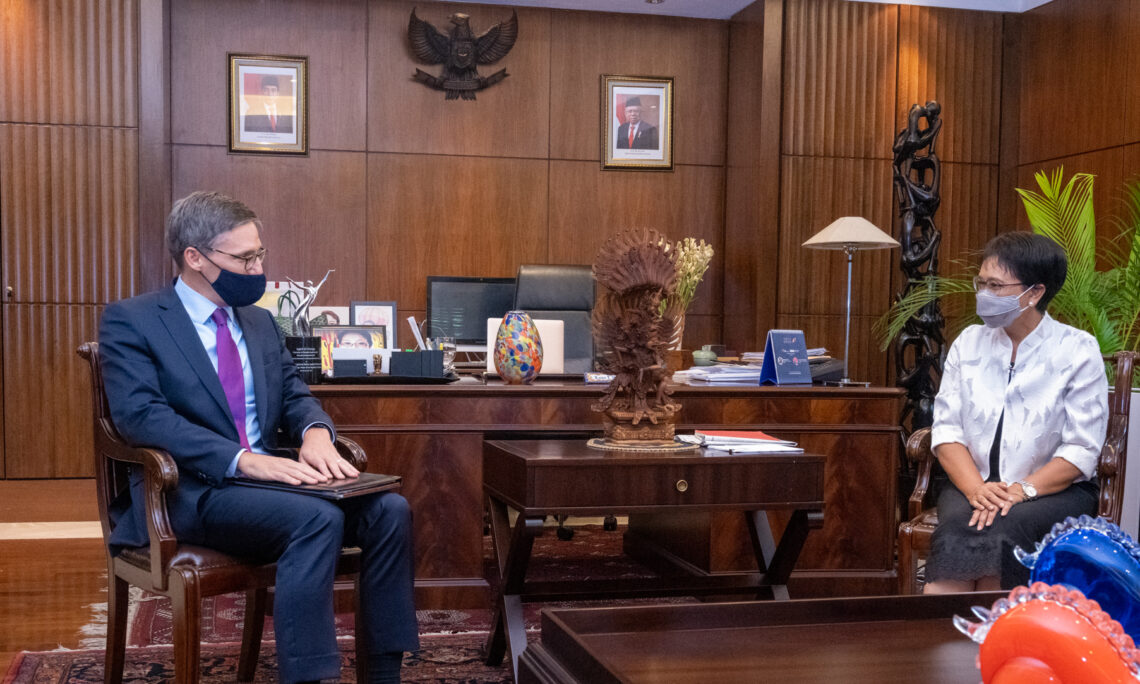 “The U.S. and Indonesia have increased cooperation in a variety of important areas, including cybersecurity, counterterrorism, maritime security, and humanitarian assistance and disaster response,” said Counselor Chollet. “We continue to reaffirm and reinforce the strategic partnership between the United States and Indonesia, especially as we work together to overcome the COVID-19 pandemic and promote a more peaceful, stable, prosperous, and healthy Indo-Pacific.”

Counselor Chollet met with Indonesia’s Minister of Foreign Affairs Retno Marsudi and other high-level KEMLU Officials and with ASEAN leadership. In these meetings, the delegation discussed opportunities to deepen U.S. engagement in Southeast Asia and opportunities for the United States to work closely with Indonesia and ASEAN and its members to tackle the most pressing challenges facing the region, including a strong post-COVID economic recovery and combatting climate change.

Derek Chollet is the Counselor of the U.S. Department of State, where he serves at the rank of Under Secretary as a senior policy advisor to the Secretary of State on a wide range of issues and conducts special diplomatic assignments as directed by the Secretary.

Mr. Chollet has previously held positions at the State Department, White House, and the Department of Defense.  From 2012-2015, he was the U.S. Assistant Secretary of Defense for International Security Affairs, where he managed U.S. defense policy toward Europe, the Middle East, Africa, and the Western Hemisphere. Prior to joining the Pentagon, Chollet served at the White House as Special Assistant to the President and Senior Director for Strategic Planning on the National Security Council (NSC) staff.  From 2009 to 2011, he was the Principal Deputy Director of the State Department’s Policy Planning Staff.  He served on the 2020 Biden-Harris State Department transition team as well as the 2008 Obama-Biden NSC transition team.

During the Clinton Administration, Chollet served as Chief Speechwriter for UN Ambassador Richard Holbrooke, and as Special Adviser to Deputy Secretary of State Strobe Talbott.  Earlier in his career he assisted former Secretaries of State James A. Baker III and Warren Christopher, as well as Holbrooke and Talbott, with the research and writing of their memoirs. His first assignment in the State Department was as an intern on the Policy Planning Staff in 1992.

Outside of government, Mr. Chollet has held a variety of positions at leading research institutions.  From 2016-2020 he served as Executive Vice President and Senior Advisor for Security and Defense Policy at The German Marshall Fund of the United States (GMF), and as a visiting fellow at the University of Pennsylvania’s Perry World House. He has also been a fellow at the Center for a New American Security, the Center for Strategic and International Studies, the Brookings Institution, the Kissinger Center for Global Affairs at Johns Hopkins/SAIS, and the American Academy in Berlin.

He is the author, coauthor, or coeditor of eight books on U.S. foreign policy, and is the recipient of numerous honors and awards, including the U.S. Department of Defense Medal for Distinguished Public Service, the U.S. Secretary of Defense Medal for Outstanding Public Service, and the U.S. State Department Superior Honor Award.  A graduate of Cornell University, he was raised in Lincoln, Nebraska.