Hundreds of middle school, high school, and university students attended @america on the afternoon of January 6 for a special screening of “Girl Rising,” a documentary showcasing stories of girls from around the world on how education helped them make meaningful changes to the world around them.  Following the screening of Bahasa Indonesia-subtitled stories from Egypt, Nepal, Cambodia, India, and Afghanistan, a panel discussion allowed for frank and open discussion of women’s issues in Indonesia.  Moderated by Rini Rusjdi from TVRI, the panel included Michelle Bekkering from the International Republican Institute (IRI), Hana Satriyo from The Asia Foundation, and Dina Ernawati from the U.S. Department of Justice.

Audience members posed questions ranging from reasons for lack of educational opportunities for women to the role of men in addressing these issues in modern society. Hearing directly from three experts from different backgrounds allowed the students to better understand the film in the context of women’s issues in Indonesia, with a specific focus on women’s political participation, education, and opportunities in the police force, as well as the issue of gender-based violence. 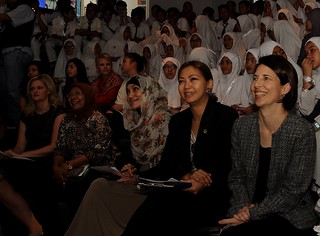