The United States of America has been represented in Surabaya since 1866, when Carlo von Oven arrived as the first United Diplomatic Representative in Surabaya. In August 1890 John Lidgerwood became the first American diplomat assigned to Surabaya.

This was a time when East Java was experiencing an economic boom, and nowhere were its effects felt greater than in Surabaya, where the bustling spice trade dominated this port city. The Consular Agent would report back to the American Embassy in The Hague on American interests in Surabaya.

The United States Consular Agency was a highly active post, largely due to the industrial development taking place in and around Surabaya, much of involving American companies such as General Motors. In 1918 it was elevated to full Consulate status, with offices located at Jalan Darmokali 38. 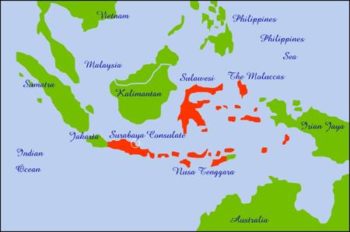 Many important visitors passed through its doors, including Senators Tydings and McAdoo, as well as Margaret Mead, the famous American anthropologist. Over the years, the Consulate has also had the opportunity to entertain other well-known persons. In 1931, Claudette Colbert visited Surabaya, and in 1933 none other than Charlie Chaplin arrived at Bandara Surabaya.