On the afternoon of February 5th,  Ambassador Blake kicked off a friendly basketball match between the employees of the U.S. Embassy and Mahaka media with a short speech and a free throw.  He was joined at the event by Erik Thohir, the owner of Mahaka media and Washington D.C.’s soccer club DC United.  In his opening remarks Mr. Thohir stressed that he would like to see more U.S. – Indonesian sports diplomacy; Ambassador Blake echoed this sentiment and highlighted the mutual love Indonesians and Americans have for athletics.  The game itself lasted about an hour, and the spirited competition showcased a couple of slam dunks, some tenacious defense, lots of smiles, and high fives all around once the final buzzer sounded. 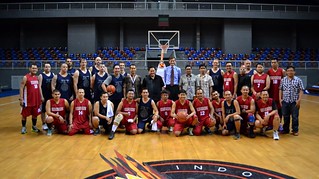