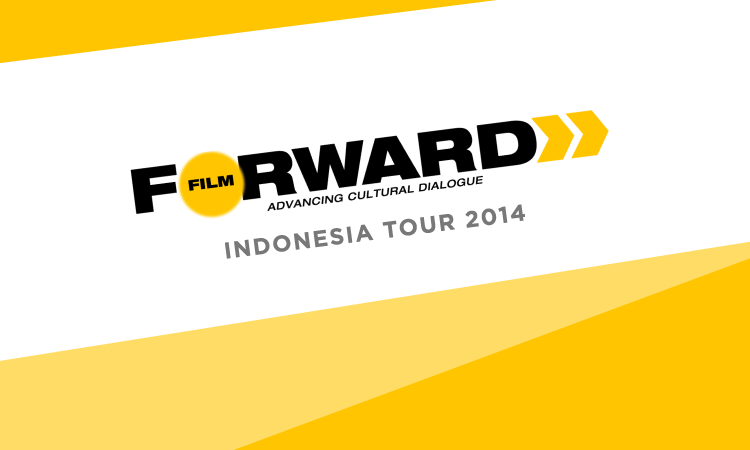 Film Forward (FF) is an international touring program designed to enhance greater cultural understanding, collaboration and dialogue around the globe by engaging audiences through the exhibition of films, workshops and conversations with filmmakers.  FF gives U.S. embassies the opportunity to bring award-winning documentaries to audiences around the world to offer views of contemporary American and global society and culture as seen by independent filmmakers.  The program offers foreign publics the opportunity to hear about an American and an international perspective on key issues in advancing cultural dialogues among nations.  As private citizens, these filmmakers share their personal and professional thoughts, expertise, and ideas.  They do not speak on behalf of the U.S. Government; rather, they provide a broader and richer viewpoint and can engage in an active dialogue with their Indonesian counterparts.

Film Forward promotes cultural dialogue through independent documentary and narrative film, using film’s unique ability to tell stories that explore universal themes to ignite meaningful conversations. A total of 8 films and filmmakers from the U.S. and abroad are selected by Sundance Institute and the partners each year to participate in this program, traveling to four domestic and four international locations. Filmmakers participate in screenings, extended Q&As, workshops, and master classes at universities, film and cultural centers, museums, libraries and other community, educational, and cultural venues, cultivating engaged dialogue, fostering appreciation of other viewpoints, and developing new audiences for independent film.

Two FF filmmakers, Srdan Golubovic and Doug Blush will lead interactive discussion, Work-in-Progress Feedback Sessions and Filmmaker Roundtables related to documentaries, with a specific emphasis on cinematography, documentary, film production, the film industry, and film research and development.  The program will screen four FF films with two main films: Circles (directed by Mr. Golubovic) and Twenty Feet From Stardom (editing by Doug Blush).  The discussions after the screenings are structured for the filmmakers to lead a question and answer session on wide variety of topics.  The discussions will also highlights social issues presented in the films.

Srdan Golubovic was was born in 1972 in Belgrade (Serbia). He studied Film Directing on The Faculty of Dramatic Arts in Belgrade.  His first feature film Absolute Hundred (Apsolutnih sto) participated in the main programs at over 30 international film festivals (San Sebastian, Toronto, Thessaloniki, Cottbus, Rotterdam, Pusan…) and  won 10 international and 19 local awards.

His second feature  film Klopka (The Trap) , had its World premiere at 2007. Berlinale, section Forum.  The Trap won 21 international award and was shortlisted for Oscar for the best foreign film.

He is assistant of professor on Film Directing on The Faculty of Dramatic Arts in Belgrade.

Doug Blush is an award-winning director, producer, editor, writer and cinematographer whose recent credits include, as the Supervising Editor, the 2013 theatrical hit 20 FEET FROM STARDOM, which won the Best Documentary Oscar in 2014.  20 FEET also brought him his first ACE Eddie Award win for Best Documentary Editing, as well as membership with the prestigious American Cinema Editors. He also edited a documentary on design thinking, IF YOU BUILD IT, which is also screening with Film Forward.  He was Editor and Associate Producer of 2012’s Academy Award nominated THE INVISIBLE WAR, directed by renowned documentarian Kirby Dick, and is currently working with the same team on a new film on campus assault issues.

Film Screenings and Discussions at @america*Note: The capacity of IRC is 30 seats, IRC is closed on Saturdays and Sundays

*Note: The capacity of @america-Performance Area is 100 seats, @america is closed on Sundays and Mondays

If You Build It