Ambassador Blake hosted the 2014 National Get-in-the-Ring Pitch Battle at @america on September 10 in collaboration with the Ciputra Foundation and the Global Entrepreneurship Program Indonesia (GEPI).  Eight startup companies came to @america from around Indonesia to compete for a spot in the Asia Pacific regional competition, with the regional winner to compete in the final round for €1M in funding for their companies in November.  Competitors included companies engaged in social entrepreneurship (particularly in agriculture), financial services, language, and travel.  Ambassador Blake’s remarks celebrated the companies’ success and emphasized the importance of entrepreneurship and small businesses in the United States and Indonesia. 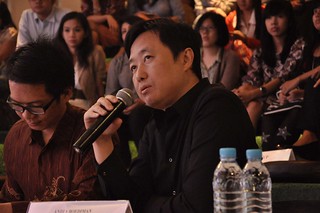