On November 18, a group of over 15 Jakarta-based Ambassadors from around the world joined Ambassador Blake and the Executive Director of Habitat for Humanity Indonesia in a day-long service project in Cijayanti, Babakan Madang Village.  Members of the diplomatic corps flexed their muscles and demonstrated teamwork in laying foundation, digging trenches for sanitation systems, and applying fresh coats of paint to the interior and exterior of newly constructed homes for families in need.  The Ambassador’s Dig initiative began in 2002 and has resulted in the construction of hundreds of homes for residents in need of safe and affordable housing.  Since 2011, Habitat for Humanity has built and renovated 435 houses in the Sentul area.  Targets for the next five years include constructing 1000 new houses, providing access to clean water for 300 families, and building communal toilets for an additional 120 families. 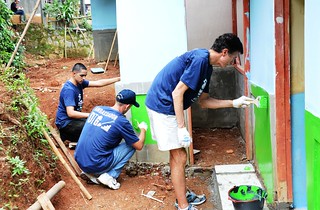