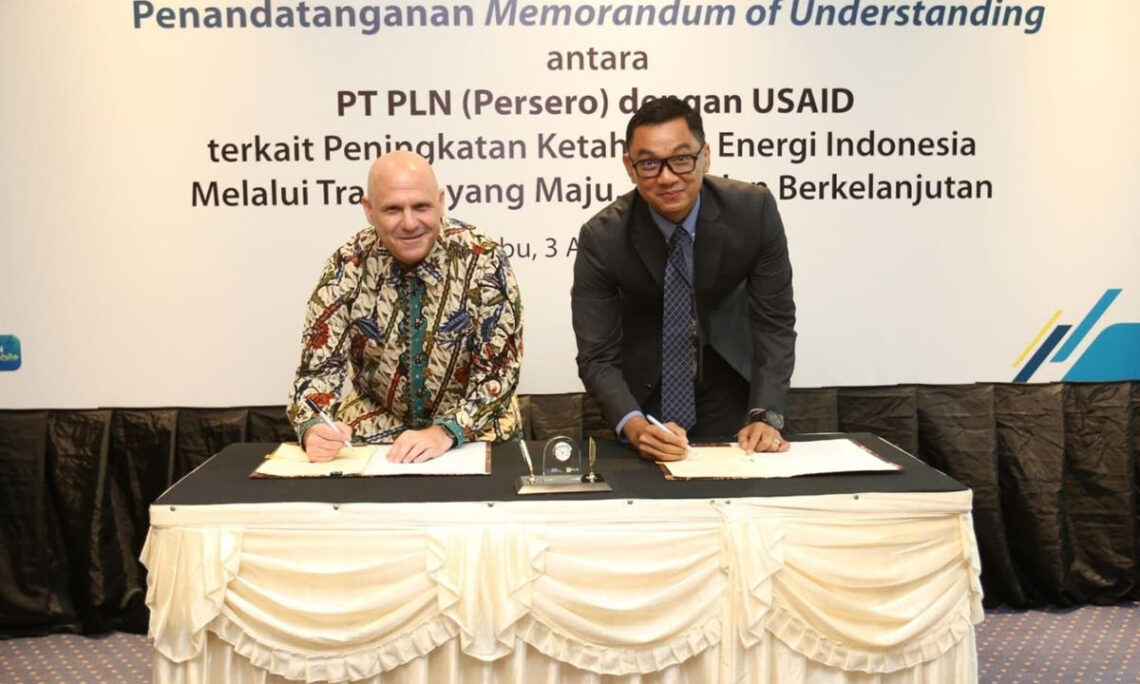 JAKARTA – On August 3, Indonesia, through its national power utility company, PT PLN Persero, and the United States, through the United States Agency for International Development (USAID), have strengthened their partnership to accelerate Indonesia’s transition to a cleaner and more sustainable energy sector.

A memorandum of understanding (MOU) signed by PLN President Director Darmawan Prasodjo and USAID Mission Director Jeff Cohen expands the long-term U.S. – Indonesia partnership to accelerate the transition of the power sector to sustainable energy resources through deployment of renewable energy and system modernization. The partnership is part of USAID’s assistance to Indonesia under the coordination of the Ministry of Energy and Mineral Resources. Through this MOU, USAID will further assist Indonesia in developing viable scenarios to decarbonize the power sector, such as early retirements of coal power plants, and identifying incentives to increase investments in renewable energy to advance a potential just energy transition partnership, which would support the Government of Indonesia’s goal of achieving Net Zero Emissions by 2060, or earlier, as consistent with the Paris Agreement.

This MOU between USAID and PLN contributes to the objectives of the U.S. – Indonesia Bilateral Climate Working Group, USAID’s 2022-2030 Climate Strategy and Clean EDGE Asia, the U.S. Government’s initiative for enhancing development and growth through clean energy in the Indo-Pacific region.

“In the fight against climate change, Indonesia’s energy transition is vital to ensuring a livable future for everyone on the planet,” said USAID Indonesia Mission Director Jeff Cohen. “Through this MOU, we are pleased to deepen our partnership with PLN to seek ways to decarbonize the sector, reduce greenhouse gas emissions, and avoid the worst impacts of climate change. USAID is proud to build on and strengthen our solid partnership with PLN as Indonesia works to meet its 2030 Nationally Determined Contributions and elevate its commitment to net-zero emissions.”

Among the activities envisioned under the MOU, PLN, and USAID plan to accelerate the deployment of clean energy, increase knowledge exchanges between Indonesian and American clean energy experts, and provide technical expertise and knowledge for policymakers seeking to reduce greenhouse gas emissions from Indonesia’s power sector. The MOU will allow USAID to advance Indonesia’s broader development goals by expanding the reliable and equitable energy services necessary for sustainable development and inclusive economic growth.

President Director of PT PLN (Persero), Darmawan Prasodjo, said that PLN, as a State-Owned Enterprise in the electricity sector, also has the same goal of achieving Net Zero Emission by 2060 in supporting the contribution and vision of the Government of Indonesia in reducing CO2 emissions.

“Roadmaps, objectives and strategies have been developed, but we recognize that there are still many challenges. Electricity prices, finance, technology and policy, are some of the challenges that need to be addressed and resolved. We believe that by collaborating and strengthening partnerships, we will be able to overcome all these challenges and accelerate PLN’s journey towards carbon neutrality. We are open to the cooperation of all parties at the national and multinational level, including USAID, to support PLN in achieving this goal.” Darmawan said.

To support PLN’s goals, USAID strives to increase investment in the renewable energy sector to maximize its potential, building on a track record of successful partnership. Since 2011, USAID has mobilized $1.78 billion in renewable energy investment, extending access to clean energy to 6 million Indonesians. This is equivalent to removing half a million cars off the road annually.

USAID’s energy partnerships in Indonesia advance a free and open, connected, prosperous, resilient, and secure Indo-Pacific region as envisioned in the 2022 Indo-Pacific Strategy of the United States. USAID’s MOU with PT PLN Persero is one of many USAID initiatives in Indonesia, which demonstrates the breadth of engagement between the two countries.