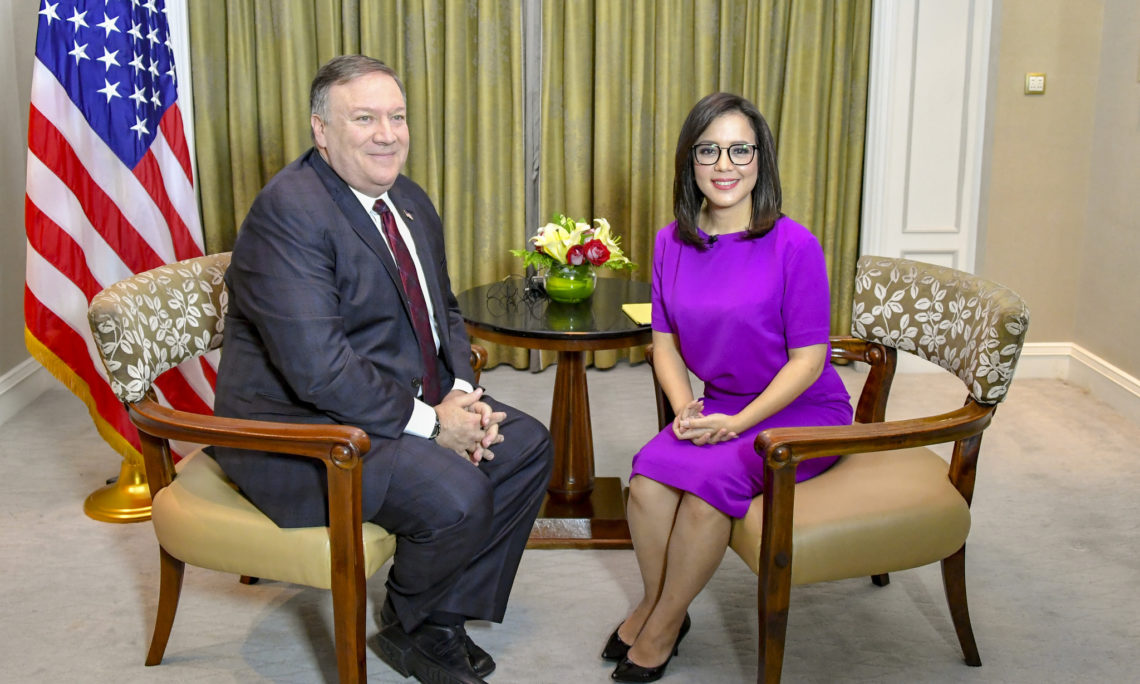 QUESTION: Secretary Pompeo, thank you again for this opportunity.

SECRETARY POMPEO: It’s great to be with you.

QUESTION: It’s such a pleasure to have you here in Jakarta, Indonesia.

QUESTION: I understand this is your first visit.

SECRETARY POMPEO: It’s wonderful and important for the United States, an incredibly strategic relationship – two of the world’s largest democracies, now 70 years of diplomatic relations. I think we do wonderful things with our support of Indonesia, and right back Indonesia does great things that are important for the American people too. It’s a strong relationship. The leadership here works closely with our team, and we are doing great things together.

QUESTION: Okay. Indonesia is also home to the largest Muslim population in the world, and it’s a functioning democracy, which the U.S. Vice President Mike Pence praised during his visit here to Indonesia. Why is this the kind of democracy that the U.S. supports?

SECRETARY POMPEO: So we support democracies all across the world; it’s really important. This is a country that has demonstrated the capacity to elect officials, hold democratic processes, the kinds of values that America has embraced since its beginning, and it’s wonderful to have a strategic partner like Indonesia who demonstrates that value set as well.

SECRETARY POMPEO: Yeah, it’s a great – it’s a great beacon for the rest of the region. The democratic value set that’s here in Indonesia shows the region and the world that you can have democracy and be successful. We always think that’s important. We’re convinced that this model of governance – the democratic model, where you have individuals with human dignity and freedom and all the rights that accrue by being a human being – makes for countries that are incredibly successful and a great partner for the United States.

QUESTION: Okay. In terms of trade and investment, Secretary, what is the kind of trading partner that the U.S. expects out of Indonesia? What are the areas of concern that the U.S. has against Indonesia?

SECRETARY POMPEO: Indonesia has long been a great trading partner. President Trump wants to trade with Asia. He wants to trade with Indonesia. We think the trade between our two countries is incredibly important. We do want to make sure when we’re trading, we’re doing it in a way that is fair and reciprocal, that respects the people of each of the two countries, and I’m convinced that our two countries will continue to do that in a way that benefits the American people and, importantly, the Indonesian people as well.

QUESTION: The reason why I’m asking you this is because we’re watching closely, and the world, including Indonesia, is concerned about the trade war unfolding between the U.S. and China. What does the U.S. expect out of this?

SECRETARY POMPEO: Well, remember, the country that has the high tariffs and the high barriers is China, not the United States. The country that attempts to use its economic power to dominate this region is China, not the United States. We simply want free and open, fair trade, reciprocal trade; and when we do that, we are confident that we will be a great partner. We have no intention of dominating Indonesia. China will always have a role here. We want to be a great partner for Indonesia so that they can continue to have all the successes that the Indonesian people deserve.

QUESTION: And going back into the investment climate here in Indonesia, I wanted to ask you about the Freeport-McMoRan deal that was recently concluded between the Indonesian Government and Freeport. Do you think the deal was a win-win situation for both sides?

SECRETARY POMPEO: You know, I don’t want to comment on a particular dispute, but we should always strive to make sure that our countries or the businesses working in your country get outcomes that benefit both. It’s got to be successful for any Indonesian business to invest in America; the same thing for an American company that invests here. But it needs to be a deal that is good for the people of the country in which that business is being done as well. So I’m confident that the Indonesian country will get to a place where we will have a win-win outcome for both the Indonesian people and the business.

QUESTION: Next year Indonesia will hold its –

QUESTION: Big election year, presidential election. How closely is the U.S. watching this election next year, and what are your thoughts about the leading contenders – Joko Widodo and Prabowo Subianto?

SECRETARY POMPEO: I’m going to go meet the current leader here today. I am very much looking forward to that. He’s done good work. But we don’t engage in choosing candidates; the Indonesian people engage in choosing candidates. And I am very confident we’ll have a good election, a fair election, where candidates will compete and demonstrate why they’re the right leader for the country, and that’s what America is counting on.

QUESTION: I have one more question about Iran, just a really quick question.

SECRETARY POMPEO: The Islamic Republic of Iran, a Shia-dominated government, has treated its people very poorly, and that’s led to terror. They’re the world’s largest state sponsor of terror. That’s what America is trying to get Iran to stop doing. That’s the behavioral change that we’re looking for from the Iranian regime.

Whether there is a deal that could be had or whether discussions are appropriate, the President has always said he is prepared to talk, but it’s important that Iran has to be committed to changing its ways in order for those discussions to prove of any value.

QUESTION: Thank you. Thank you very much, Secretary Pompeo.

SECRETARY POMPEO: Thank you very much. It’s wonderful to be with you. Yes, ma’am, thank you.