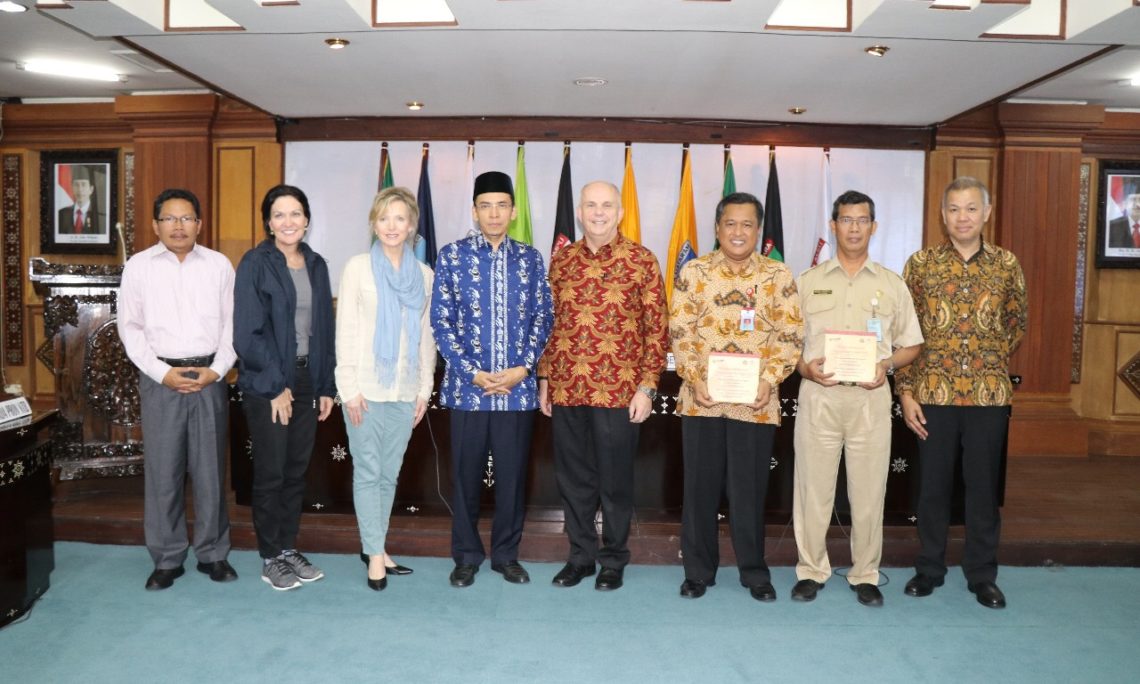 Surabaya – A delegation from the U.S. Government’s Millennium Challenge Corporation (MCC) joined United States Ambassador to Indonesia Joseph R. Donovan Jr. in Lombok to mark the closure of MCC’s compact with the Government of Indonesia. Ambassador Donovan and the MCC delegation, led by Vice President and Secretary of the MCC Board Jeanne Hauch and Vice President for Congressional and Public Affairs Karen Sessions, met with provincial Governor Muhammad Zainul Majdi of Nusa Tenggara Barat (NTB) to recognize his strong support of MCC projects in the province.

Ambassador Donovan noted “The progress here is an example of the success of the compact across the country, which has provided a strong foundation for the Government of Indonesia to help millions of Indonesians lead healthier and more economically secure lives.”

MCC’s five-year compact with the Government of Indonesia has overcome barriers to growth through investments in nutrition, procurement modernization, and by advancing green prosperity through sustainable development. Noteworthy MCC successes in NTB include:

Today’s events conclude three days of site visits with communities across the island. While in Lombok, the MCC delegation met with participants and beneficiaries of a number of Community Based Natural Resources Management (CBNRM) grant projects, including a posyandu health center, and a procurement service unit. On May 8, the delegation will return to Jakarta for the final closeout ceremony hosted by the Millennium Challenge Account – Indonesia, and the Indonesian Ministry of National Development Planning (BAPPENAS).

“MCC’s partnership with the Government of Indonesia introduced new models and systems tailored and scaled to meet both local and national needs—and we have seen how this approach has worked first-hand during our visit to Lombok,” said MCC Vice President and Secretary of the MCC Board Jeanne Hauch. “We are proud of what we’ve achieved together and I look forward to seeing how people in Nusa Tenggara Barat and across Indonesia, continue to build on that progress.”

About the MCC Compact:

MCC’s five-year compact with Indonesia has been a major pillar of the U.S.-Indonesia Strategic Partnership. Investments, made through the compact, have reduced poverty and promoted economic growth and engagement with the private sector, including partners such as Mars, Nestle, Unilever and others.

Through the MCC, the United States has supported Indonesia’s development and contributed to regional security and global economic growth.

The MCC Indonesia Compact was designed by and for Indonesians to address significant barriers to economic growth and private investment in Indonesia. The compact sought to reduce childhood stunting and malnutrition by shaping a national conversation on nutrition; improve the effectiveness of government spending by modernizing the government’s procurement system for public goods and services; and supported the Government of Indonesia’s commitment to equitable growth by maximizing opportunities for investment in agriculture and renewable energy, including through partnerships with the private sector. The compact began in 2013 and was implemented by the Millennium Challenge Account – Indonesia.