Drawing on NET TV’s popular “Muslim Traveler” program as a starting point, Ambassador Blake opened a screening and discussion program on Islam in America at @america on the afternoon of July 9. ‎ Two NET TV reporters traveled to Washington DC, New York, and Minneapolis in late April/early May as part of a State Department-funded TV Co-op and filmed four episodes of the popular Ramadan program: “Muslim Traveler.”  Following their return to Indonesia, Embassy Jakarta invited the TV crew and author/Fulbright alum Ahmad Fuadi (who was in the U.S. during 9/11) to participate in a panel discussion on Muslim life in the U.S. and featured a screening of two episodes of “Muslim Traveler.” Over 100 students and members of the local media asked the panelists about issues with wearing the hijab in the United States, discrimination against Muslims in the U.S. as portrayed in films, lessons for Indonesia on valuing minority communities, youth radicalization, and how the Muslim community in the U.S. engages on the issue of prophet Muhammad cartoons when freedom of expression is protects this activity. The NET TV crew also revealed how their trip to the U.S. and interactions with American Muslims directly refuted claims that America was anti-Muslim and it was difficult to practice the Muslim faith in the U.S. Ahmad Faudi shared his experience of participating in Friday prayers at a church in thhe middle of GW’s campus and an increased desire from Americans to understand more about Islam after 09/11. 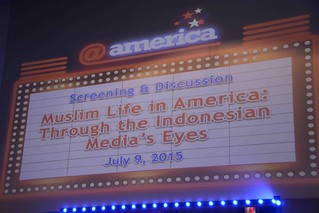