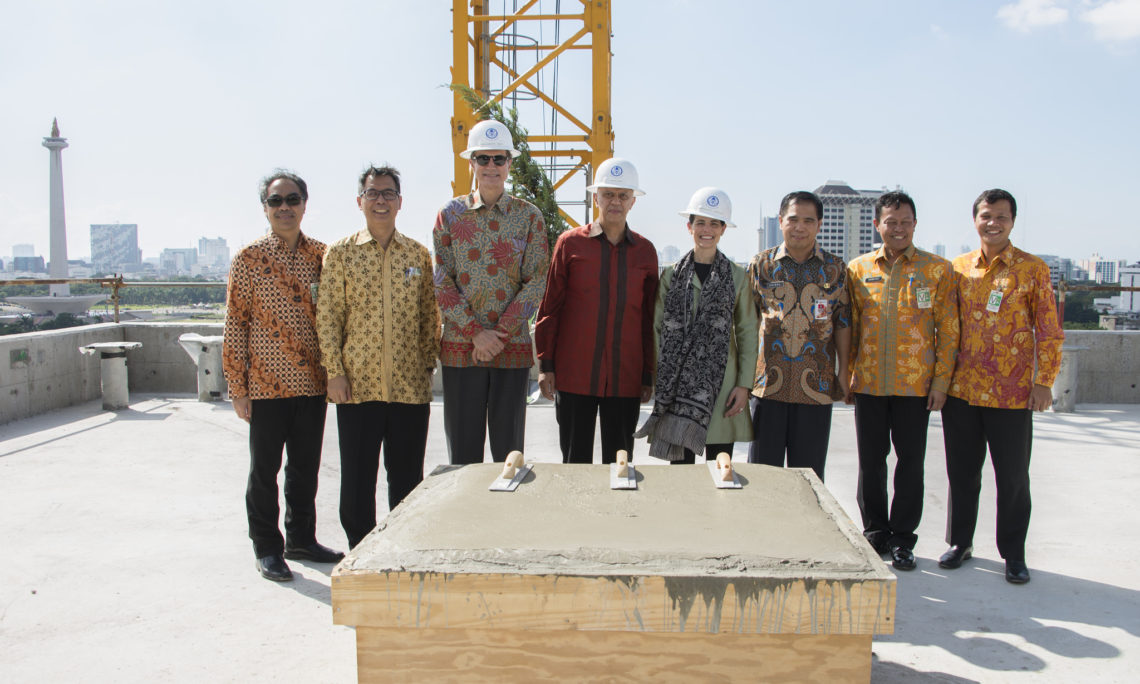 JAKARTA, Indonesia – In an important symbol of America’s commitment to an enduring Strategic Partnership with Indonesia, U.S. Ambassador Robert O. Blake today along with US Ambassador to ASEAN Nina Hachigian and Director-General for Protocol and Consular Affairs, Ministry of Foreign Affairs, Andri H

JAKARTA, Indonesia – In an important symbol of America’s commitment to an enduring Strategic Partnership with Indonesia, U.S. Ambassador Robert O. Blake today along with US Ambassador to ASEAN Nina Hachigian and Director-General for Protocol and Consular Affairs, Ministry of Foreign Affairs, Andri Hadi marked the completion of the initial structural phase of the new U.S. Embassy.

At the “topping out” ceremony to mark the structural completion of the U.S. Embassy’s new office building (NOB), Ambassador Blake thanked the Government of Indonesia for its support on the project and highlighted the importance of the relationship between the two countries. “Following the decision of President Obama and President Jokowi last year to elevate our relations to a strategic partnership, the arc of cooperation has never been wider or stronger. And we expect that trend to continue,” he said. The Ambassador also highlighted a few of the new embassy compound’s environmental design features that employ water conservation through rain water harvesting and bio retention of storm water and recycling waste water treatment for irrigation as well as energy savings through the use of photovoltaic (solar) panels and building sunscreens.

US Ambassador to ASEAN Hachigian emphasized the durability of the decades long US-ASEAN strategic partnership, noting that the new building will also be home to the US Mission to ASEAN and the new US-ASEAN Connect Center. “Advancing our partnership is essential. It is committed to strengthening democracy, enhancing good governance and the rule of law, promoting and protecting human rights and fundamental freedoms, supporting economic integration, and protecting the environment,” she said.

The new Embassy, located on the existing embassy grounds on Jalan Medan Merdeka Selatan, continues the United States’ effort to preserve and enhance its presence on this historic and culturally significant public square. The multi-million dollar project has generated jobs in both the United States and Indonesia. Construction of the first phase is scheduled to be completed in 2018 and will involve more than 1,000 Indonesian workers. Upon completion, the multi-building complex will encompass approximately 31,000 square meters of total area. As part of the project’s second phase, the United States will relocate and restore the historic building which the Republic of Indonesia delegation occupied during negotiations with the Dutch in 1949. The restoration will use internationally recognized preservation techniques under the guidance of a local historic preservationist. When completed, the restored historic building will be visible from Jalan Medan Merdeka Selatan.