Following their weekend performances at the Java Jazz Festival, U.S. Air Force Band of the Pacific – Pacific Clave performed to a packed house at Daar El Qolam Pesantren in Banten. The band conducted an interactive master class for the school’s marching band (who also performed at Java Jazz), followed by an inspiring performance for the pesantren’s 1000+ students. 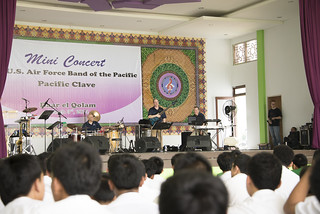