Ambassador Blake joined with the NBA’s community outreach initiative, NBA Cares, on Thursday, Sept 4th at the Embassy basketball court, to help promote basketball in Indonesia and support the efforts of the Special Olympics.  The Ambassador spoke about the effectiveness of sport in bridging cultural divides to an audience of 30 Special Olympics athletes just before opening the event by firing off a jumpshot of his own.  NBA legends Horace Grant and A.C. Green led the coaching clinic and later fielded questions from members of the local media. 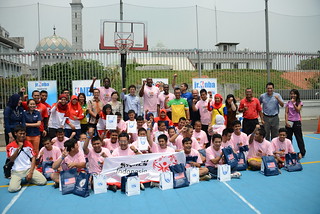