On April 24, Ambassador Blake opened a marine conservation event at @america with an audience of over 200, half of whom were university students. This event was the final evening event in a week-long commemoration of the 44th Earth Day. The Ambassador spoke to press before the event about ongoing U.S.-Indonesia collaboration in countering the effects of climate change on coastal areas, highlighting a recent Government of Indonesia regulation that fully protects manta rays in Indonesia’s territorial waters. This event was part of an on-going campaign to raise public awareness and reduce the demand for illicit wildlife products such as manta ray gill plates that are used in traditional medicinal tonics. The Ambassador also awarded travel tickets to an Indonesian national park to the two winners of a Vine contest co-sponsored with WWF, and was joined on stage by Save the Sharks mascot “Itong the Shark” and Miss Scuba Indonesia winners. 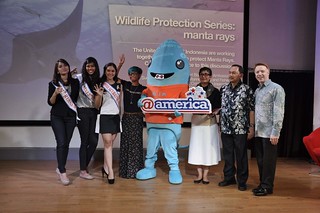