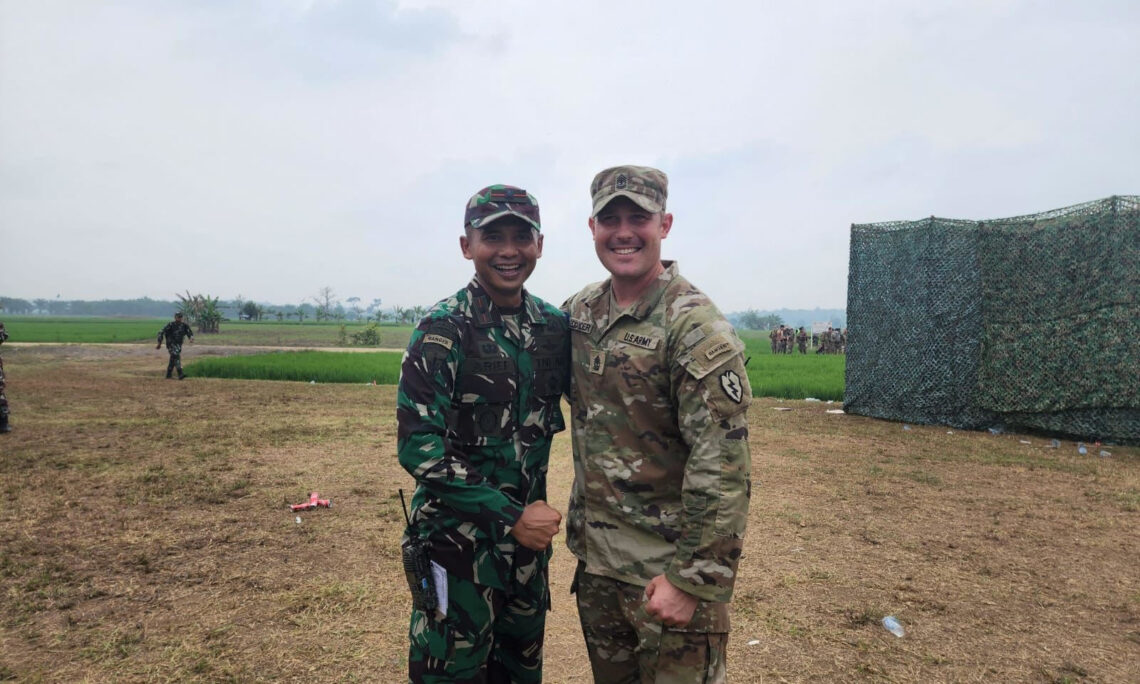 BATURAJA, INDONESIA – Among the hundreds of people present during the joint airborne operations in support of Super Garuda Airborne on Aug. 3, 2022, 1st Sergeant Dan Alexander, First Sergeant, A Company., 2-35 Infantry Battalion, spotted the Ranger tab on the shoulder of a Tentara Nasional Indonesia (TNI) soldier. Alexander had encountered former Ranger students throughout his years in the Army, but never an international student in their home country.

“I asked him when he went through,” said Alexander. “His eyes lit up.”

Maj. Arief Widyanto is one of the few TNI soldiers who have earned the title of Ranger.

Ranger School is the Army’s toughest course and the premier small unit tactics and leadership school. The course includes over 60 days of rigorous training in a variety of terrains and during all hours of the day. Students that complete the course are awarded a black and gold Ranger Tab signifying their tactical proficiency and leadership skills.

“I come from a quite high humidity area, at the time it was winter so it was quite hard for me,” said Arief. “Unfortunately, I was recycled during the Mountain Phase,” added Arief, referring to the Mountain Phase of Ranger School. This portion of the course includes instruction on military mountaineering tasks, mobility training, and techniques for continuous combat patrol operations in mountainous environments.

Shortly after meeting, the two soldiers came to a startling realization: Alexander was the Mountain Phase Ranger Instructor who had graded Arief during his U.S. Ranger training.

Arief passed the Mountain Phase after receiving that ‘Go’, and went on to earn his Ranger tab. He continues to use the lessons from his time training in the United States to assist his subordinates.

“The most important lessons that I learned from Ranger School is how leadership itself works,” said Arief. “It led me to success.”

Arief has held a variety of leadership roles over the course of his 17 years serving in the TNI. His most recent achievements are completing the TNI Command and Staff College. In Jan. 2022 he assumed command of the 501st Para Raider Battalion, West Java.

“I think this encounter speaks to the importance of individual encounters and how you never know what impact they may actually have,” said Alexander. “I was a young Ranger Instructor, training and evaluating students, unbeknownst to me one of them would be a commander of an airborne battalion in a partnered nation in the Pacific.”

Throughout their time in Indonesia for Super Garuda Shield, Alexander and his soldiers in the 2-35 IB have worked closely alongside the TNI.

“We’ve spent most of our time trying to pick their brains on how to move and maneuver in a jungle environment,” said Alexander. “The Field Training Exercise is probably where we will absorb most of that.”

Exercises such as Super Garuda Shield increase our ability to work together across the military spectrum by providing an opportunity to develop interpersonal-relationships among U.S. servicemembers and TNI.

“Even across the world Maj. Arief always has friends in the U.S,” said Alexander. “A Ranger is still a Ranger, even in another Army.”