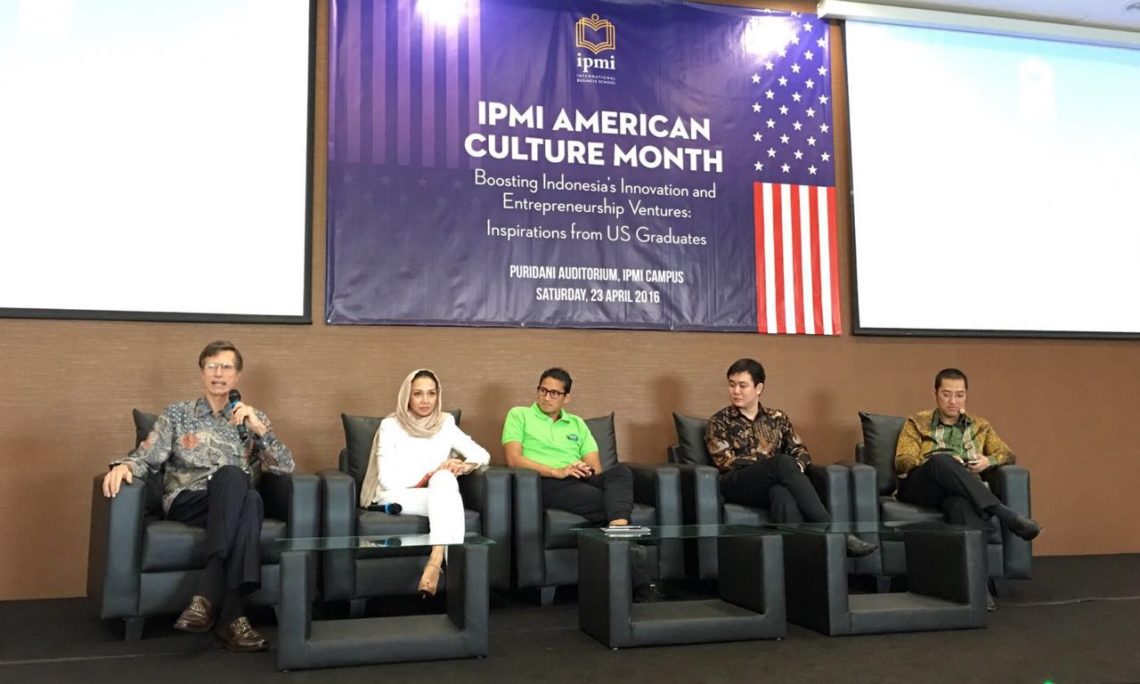 Good morning.  It is my great pleasure to be back here at IPMI International Business School’s American Culture Month.  Thank you to IPMI, especially Jimmy Gani and Dana Afriza, for all of your efforts in putting the American culture month together.

A special thanks to Pak Dino Patti Djalal for his energizing speech this morning, his work to encourage an international perspective among Indonesian youth, and to the fantastic panelist talk show and IPMI performance.

I am happy to support IPMI in their celebration of American culture and am honored that America was selected as the first in their series of celebrating other cultures from countries around the world.

America is a country where one can enjoy life, liberty, and the pursuit of happiness.  Of course, these freedoms are not exclusive to Americans, but are embodied in the constitutions of many nations. In particular, Indonesia also holds these same values.

The United States and Indonesia are also alike in that we are two of the largest most diverse and democratic countries in the world, both built upon shared principles of democracy and good governance, respect for human rights, and the promotion of peace, stability, and economic well-being.

At the same time, there are many of aspects of American culture that are unique.

A few images that may instantly pop into mind may be Hollywood, or American football and basketball.  I am always impressed when Indonesians come up to tell me about the latest feats of Lebron James or Kobe Bryant or the USC Trojans.

My highest priority as U.S. Ambassador is to strengthen the partnership between the United States and Indonesia, and particularly people-to-people relations.  There is no better way to do that than through cultural exchanges.  Some of most successful programs have been music and dance bands that have electrified audiences:

IPMI’s celebration of American Culture is an excellent demonstration of this effort by Indonesia.

Another meaningful way to strengthen our partnership is through international educational exchange- something that IPMI is also diligently working on.

Education, and particularly international education, transforms lives.  There is no better way to understand one another, and our cultures, than by sharing the experience of learning together in a classroom.

I have met so many smart, ambitious, and entrepreneurial young Indonesians, and I am convinced our university classrooms would benefit from them.

And they benefit from studying at some of the greatest universities in the world.

Some of the biggest names in Indonesia’s tech sector have U.S. education on their resume.  You need look no further than Nadiem Makarim, who returned from the United States with B.A. from Brown, an MBA from Harvard, and a few years’ work experience under his belt and set off to create one of Indonesia’s hottest startups with Gojek.

Albert Lucius and Agung Nugroho grew up together in Indonesia before pursuing separate education opportunities in the United States at the University of Illinois and University of California, Berkeley.

They returned to found Kudo, which is linking e-commerce to Indonesians that lack connectivity through their portable e-commerce tablets.

Sandiaga Uno and Shimta and Jimmy right here are other great examples.

I mention these leaders because they are leading the charge to diversify Indonesia’s economy and create jobs in completely new sectors.

Innovation will continue to drive structural changes in the global economy as the digital economy, the sharing economy, artificial intelligence, robotics all are likely to have significant impacts.

Here in Indonesia the digital economy has the greatest potential to have a transformative impact.

With more than 85 million Indonesians online already and the opportunity to add many more relatively quickly, Indonesia’s digital potential is enormous.

Indonesia’s digital ecosystem is vibrant.  But it remains small.  According to a recent Accenture study, the U.S. internet economy accounts for more than 6% of America’s GDP.  Estimates put the Indonesian digital economy at about 1% of GDP.  So there is tremendous room for growth in Indonesia.

But the booming tech sector here already suffers from a talent deficit. As startups grow, finding talented engineers and coders is becoming difficult.  The government is working to address this, and Indonesian private sector leaders like Ibu Shinta and Sandi Uno are playing a leading role too.

I’ve discussed this with our friends at The University of Indonesia and at Gadjah Mada in Yogyakarta, but it bears repeating.

The countries that benefit from these new technologies will be those who have a trained and educated work force to lead these transformations.  That’s why higher education is so important to the future of the US, Indonesia and every other country.

Indonesia must educate its young people for the jobs of tomorrow so that Indonesia can achieve its digital potential.

That’s where academic institutions like IPMI come in.  Just as Stanford, MIT and other U.S. universities have become centers of innovation and sources of America’s entrepreneurs, Indonesian universities can become the engines of Indonesia’s digital economy growth.

To do so, Indonesian universities must become more entrepreneurial, and seek partnerships with the private sector to boost research and development, involving students in cutting edge research.

A great example of this is the Geothermal Capacity Building program, a partnership between the University of Southern California, the Bandung Institute of Technology, USAID, and Star Energy, an Indonesian geothermal company.

The program conducts seminars on geothermal technologies, provides scholarships, and creates internship opportunities for students at American and Indonesian companies.

Through this partnership, ITB’s geothermal master’s program is strengthened, and the participating companies benefit from qualified graduates to fill their ranks.

But such partnerships are the exception.  Every university in Indonesia should be thinking about how its faculties can partner with the local private sector to fund university research, train the students in those faculties, and drive the innovation that will create jobs in districts and provinces across Indonesia.

But they should also be nurturing partnerships with their American counterparts, developing faculty exchanges and sending their graduate students to the U.S. so they can form the nucleus of new leading edge centers of excellence when they return.

It is no secret that with over 4,500 colleges and universities in the United States, a U.S. education offers the best quality, value, and diversity in the world with a program for every interest.

For those of you here today who are finishing up your bachelor’s at IPMI, or another university in Indonesia, and interested in pursuing graduate studies, I highly encourage you to apply for the prestigious Indonesia Endowment Fund for Education or “LPDP” scholarship program.

I look forward to sending you on your way to graduate school in the United States.  And for those of you still in the process of applying for the scholarship, I can’t imagine a better way to take care of financing your graduate education.

I would also add, our very own EducationUSA is an organization that you can trust to provide unbiased, accurate, and comprehensive information for those interested in studying in the United States, and best of all, their services are free!

EducationUSA advisers don’t advocate for a single university; they neutrally represent all accredited institutions of higher learning.  They can help you select an institution that is perfect for you, find scholarships, and walk you through the application process.  You can connect with an EducationUSA adviser online or at the education corner at @america in Pacific Place mall.

We greatly value our relationships with Indonesian universities such as IPMI who assist in our collaborative effort to increase higher education opportunities for Indonesians who want to study in the United States.

So, in this spirit of partnership and cooperation, I want to thank all of you for celebrating American Culture Month with IPMI.

I hope IPMI and its students have enjoyed learning about the many varied aspects of American culture throughout the month of April and in the remaining week to come.  Let’s use this celebration as a chance to exchange ideas, form new connections, and further cultural understanding between our two nations.