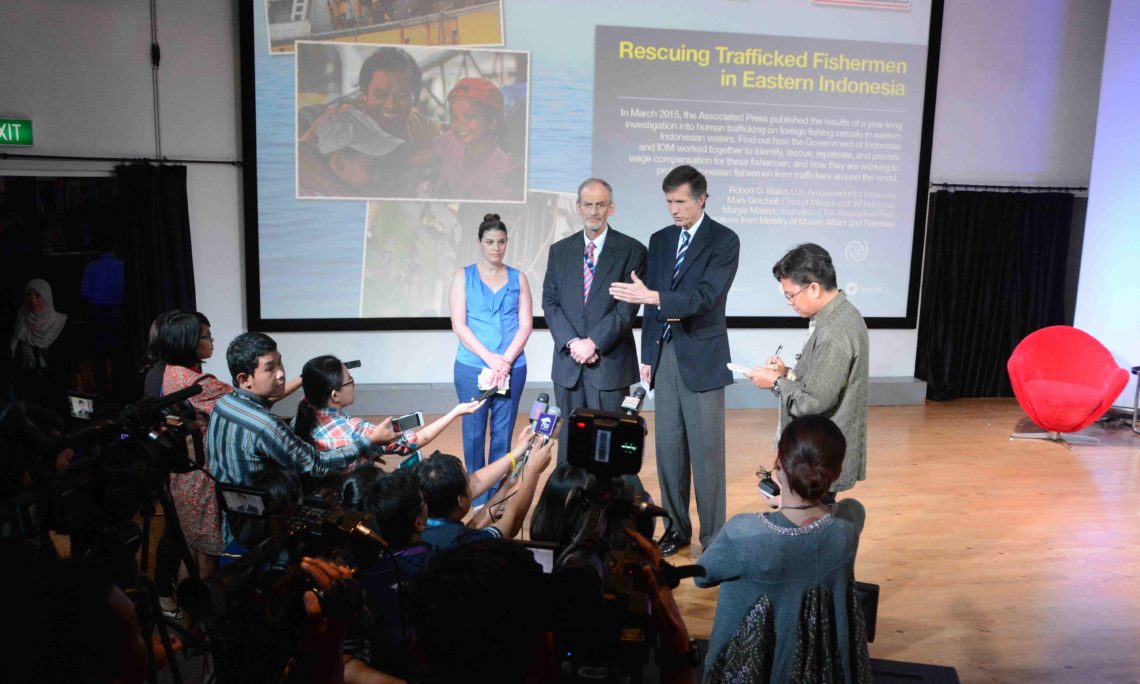 Welcome to @america and thank you all very much for coming today.

I would like to give a special thank you to Dr. Yunus Husein from the Ministry of Marine Affairs and Fisheries, who is representing Minister Susi Pudjiastuti, who could not be with us because she is traveling with the President in Europe.

A warm welcome also to IOM Chief of Mission Mark Getchell, who will be speaking shortly, as well as Dr. Justin Lee, DCM from the Australian Embassy, and Hana Ryba Cervenka of the Norwegian Embassy, whose governments have also provided important donor support to this effort.

I’d like to thank the representatives from the Embassies of Myanmar, Cambodia, and Thailand for coming today.  And I’d especially like to thank Margie Mason, who was one of four journalists from the Associated Press who broke the trafficked fishermen story just over a year ago and whose work helped set in motion the rescue process that we are celebrating today.

I’m sure you have all heard that she and her team won a Pulitzer Prize, our highest honor for journalists, on Monday for their work on this issue, and so I’d like to offer her my warmest congratulations and my thanks for being in Jakarta for this event.

I understand that she missed the announcement of the prize in New York so that she could be here today.  She and her team have also won the prestigious Polk and Goldsmith journalism awards for their reporting on this issue.   I would also like to recognize and thank our Ambassador to ASEAN Nina Hachigian, who helped so much to mobilize U.S. support for this effort last year.

We are here today to hear a remarkable story about what can happen when governments, the press, and international organizations pool their efforts in support of a common aim.  In March 2015, the Associated Press ran a story about foreign fishermen on vessels in eastern Indonesia who had been taken far from their homes in Myanmar, Cambodia, Thailand, and Laos, and forced to work long hours under horrific conditions.

The images and the testimonials from this series of articles caused widespread outcry in Indonesia, the U.S, and  in other parts of the world, but the fishermen were in remote locations and difficult to locate.  It was Minister Susi Pudjiastuti who created the conditions that allowed them to be rescued.

In her efforts to put a stop to illegal fishing in Indonesian waters, she ordered those vessels to be impounded in port, making it easier for journalists to access the fishermen and hear their stories.   The Minister was interviewed for the story and made it clear from the outset that she regarded the treatment of these fishermen as criminal.

So when the International Organization for Migration approached her for help in reaching the fishermen, she was more than willing to offer her assistance, both to stop illegal fishing but also because of her compassion for the trafficked fishermen.

Soon IOM workers were joining Susi’s officials in these remote ports, interviewing fishermen and discovering that hundreds of them met the definition of trafficking victims.

With the assistance of donor countries like the U.S., Australia, and Norway, as well as the cooperation of the Embassies of Myanmar, Thailand, Cambodia, and Laos, IOM was able to offer support and shelter to the fishermen and repatriate hundreds of them to their countries of origin.

The Indonesian police investigations into the trafficking cases in Benjina resulted in arrests and the traffickers are now facing trial in Indonesia.  Importing slave-caught seafood into the U.S. is illegal, so these investigations have spurred U.S. authorities to look more closely at our own imports.  AP reporter Margie Mason and her team followed both the trafficking story and the illegal fishing story in great detail and reported on it extensively, and we’ll see some of her work later on in the event.

All told, between the efforts of IOM and those of the various embassies involved, over 1,500 trafficked fishermen have been repatriated in the space of little over a year.  We in the U.S. Government were pleased to be able to support this effort through our anti-trafficking funding to IOM and through the analytical support provided by our Department of Justice’s International Criminal Investigative Training Assistance Program or ICITAP.

But none of this would have been possible without the commitment of Ibu Susi and her hard-working staff, who were not content to focus their efforts solely on IUU fishing, but understood that they were in a unique position to rescue these men who had been victimized in Indonesian territory by the same individuals and companies complicit in the illegal pillaging of Indonesia’s maritime resources.

So what we would like to do today is not only to congratulate IOM, AP, and the Indonesian Government for their efforts on behalf of trafficking victims, but to encourage them to continue their important work, because we know that there are likely many more victims out there that have not yet been identified.

By raising awareness of their plight, you are drawing global attention to the problem of trafficking in the fishing industry, and this will benefit not only fishermen from Myanmar, Thailand, Cambodia, and other countries in the region, but also fishermen from Indonesia, who have been trafficked in foreign waters as well.

On that note, let me turn the floor over to Mark Getchell of IOM, who will tell you more about how IOM was able to respond to this emergency.   Thank you all again for coming.