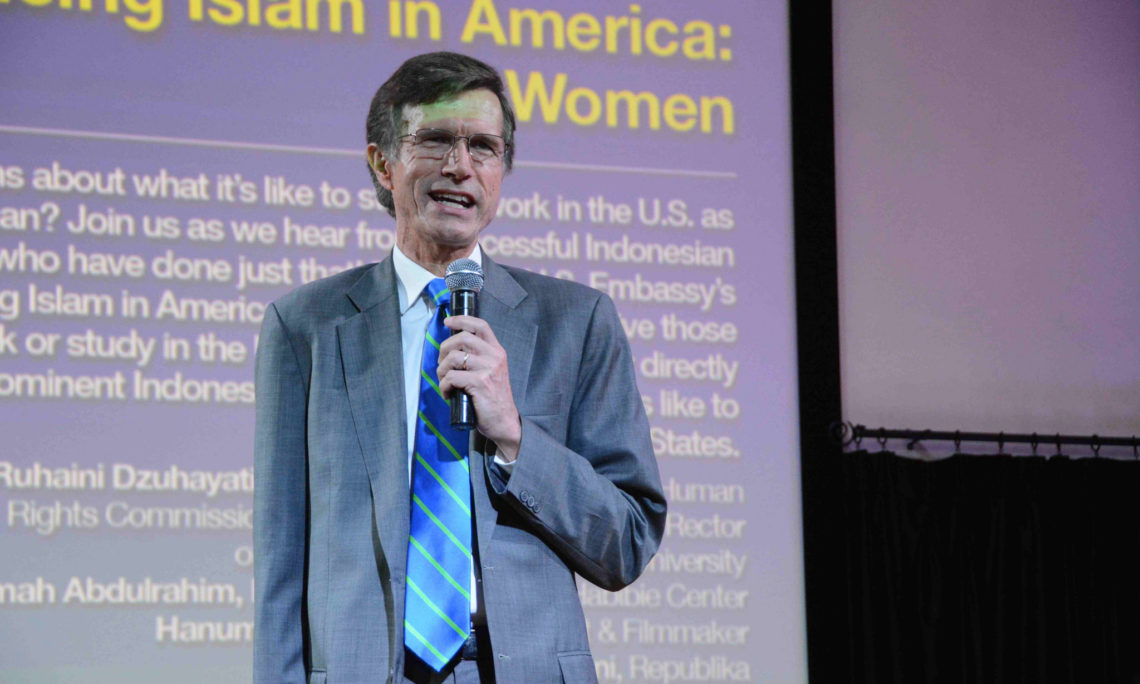 Remarks by Ambassador Blake at “Experiencing Islam in America: Women” at @america, Jakarta

Welcome to @america.  I want to thank our distinguished speakers for being here today:

This is our third “Experiencing Islam in America” event.  In August my friend Shamsi Ali and some other famous Imams spoke on this topic, and in November we had Erick Thorir and Azyumardi Azra here.

Did anyone in the audience attend any of those events?  Great!

Today is International Women’s Day, and so we want to celebrate that by hearing from three distinguished Muslim Women leaders about their experiences as Muslims living, working, and studying in the United States.

There are many countries today who do not offer a place for women in religious life, civil society, the workplace, or politics.

But one thing that really sets Indonesia apart from many other countries is that women here hold high places in government, academia, the judiciary, media and the arts, and all other aspects of public life.

You have even had a female president, before many other countries in the world!   So I would like to thank our speakers for agreeing to share their unique perspective on this important topic.  We need to hear more from women on these issues.

And this is an important time to be having this discussion. Religious Freedom is a core tenet of both our nations.   It is in the First Amendment of the U.S. Bill of Rights and it is enshrined in the Indonesian constitution.

Nonetheless, a recent Wahid Institute study found a 23 percent rise in discrimination against minorities in Indonesia in the last year.   And in my country, too, the upcoming elections have seen a rise in intolerant political rhetoric.

As democracies, both Indonesia and the United States have a responsibility to ensure that all citizens are afforded basic human rights to live free from harassment and violence.

That is why, as some of you may have seen, President Obama recently gave a speech at a historic mosque in Baltimore to address the nation on the important contributions Muslim Americans make to our society and communities, and to make it clear that anti-Muslim rhetoric and discrimination has no place in our country.

During the speech, he also called on Muslim Americans to share and help educate their fellow citizens about the true nature of Islam.   And so I would like to extend that call to you.

I hope you use every opportunity you have, whether here or abroad, to tell the world about the tolerant, peaceful version of Islam practiced here in Indonesia; an Islam that is compatible with and enhances democracy and democratic values; and that produces and celebrates women leaders like we have here today.