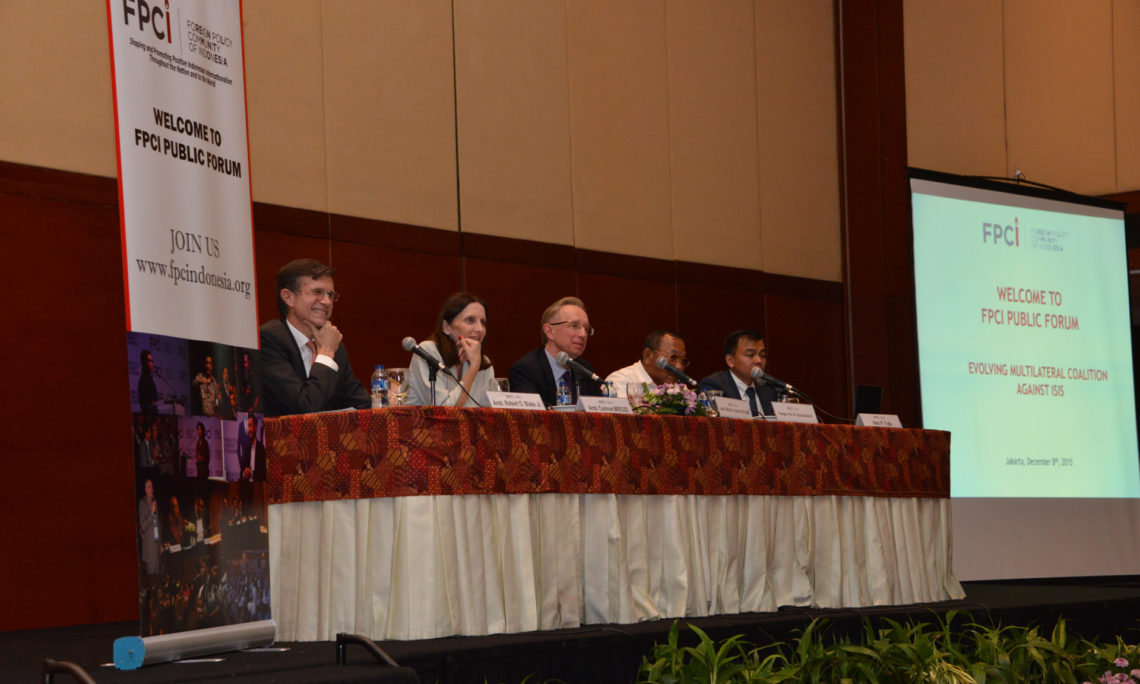 Remarks by Ambassador Blake at the FPCI’s Panel “Syria: A Multilateral Approach”, Jakarta

Thanks to Ambassador Djalal, Pak Heru and the Foreign Policy Community of Indonesia for organizing today’s event focused on one of the very highest priorities facing the international community, namely ending the Syria conflict and eliminating the threat to all of us posed by ISIL.

The war in Syria – now in its fifth year – has already left one in twenty Syrians wounded or dead.  It has compelled one in five Syrians to flee as refugees.  It has displaced half of that country’s population.  The fighting has spawned a refugee crisis in Europe.  It has created a haven for ISIL and other terrorist organizations to thrive.

The recent attacks in Paris and in Beirut, and the downing of a Russian civilian airliner over Egypt, are heinous acts of terror that have underscored for everyone in the international community the urgency of bringing this prolonged conflict to a close.

President Obama has set forth three inter-related goals:  defeat ISIL; stabilize the region; and support a political transition to end this civil war.  These are not in priority order – they are mutually reinforcing and should be pursued simultaneously.  I will focus my remarks today on the third goal of a political transition since that has received the least attention here, but of course we can talk about any of the other goals in the question and answer session.

In the immediate aftermath of these attacks, on November 14, the International Syria Support Group, including the United States, France, and Russia, along with China, the UK, UN, the Arab League, the EU, Iran and many countries in the Middle East, met for the second time in Vienna to redouble our efforts to bring the war in Syria to an end and defeat ISIL.

The development of the International Syria Support Group has been a key step in this process, because it brings together all of the countries with a stake in the conflict and focuses their efforts on the common goal of working together with the Syrian people to bring it to a close.

All participants in Vienna agreed on the necessity of a ceasefire and a parallel political process as envisioned in the 2012 Geneva communique, and in Vienna they laid out a path towards bringing those two goals to fruition as quickly as possible.

First, they agreed to push for the beginning of formal negotiations between representatives of the Syrian opposition and the Syrian regime, under UN auspices, with a target date of the two sides actually sitting down together no later than January 1st.

The group agreed to work with UN Special Envoy Syria Staffan de Mistura to gather a wide range of Syrian opposition figures, chosen by the Syrians themselves, and bring them together with representatives of the regime with the goal of hammering out the ceasefire and launching the political process.

The parties also reaffirmed the roadmap for the political process envisioned in the Geneva Communique: namely, the drawing up of a new constitution, followed by free and fair elections under UN supervision within 18 months, with all Syrians, including members of the diaspora, eligible to participate.

What is important to stress is that even though not all of the Support Group agree on all aspects of resolving this conflict – for instance, we don’t all agree on the future of Bashar al-Assad – we recognize the urgent need to bring the conflict to an end by bringing the regime and the opposition to the table.

Equally importantly, every member of the Support Group agrees that the goal is not to impose our will on the Syrian people. Exactly the opposite; the Syrian people, with our united support, will lead the process that brings this conflict to an end.

Secretary Kerry has been very clear that we don’t have any illusions about how complicated this is.  We understand that military intervention in this region must be carefully calibrated to the parallel political process which is indispensable to the creation of a viable political entity in Syria, which represents all of the Syrian people, and excludes terrorist groups like ISIL and al-Nusra.

Our strategy has been to combine our diplomatic and military efforts to secure real progress on the ground, and it’s working, not as fast as anybody would like, but it is working.  President Obama has made critical decisions.

So, in conclusion, the U.S. believes that we need to seize the initiative after the recent wave of attacks, and use this moment of international solidarity to push forward with our united efforts to bring about an end to the conflict and defeat the terrorists.   If we are patient, tenacious, and deliberate in our efforts, we will be able to defeat ISIL and the barbarism that it represents, and in so doing, bring about a better future for the Syrian people.