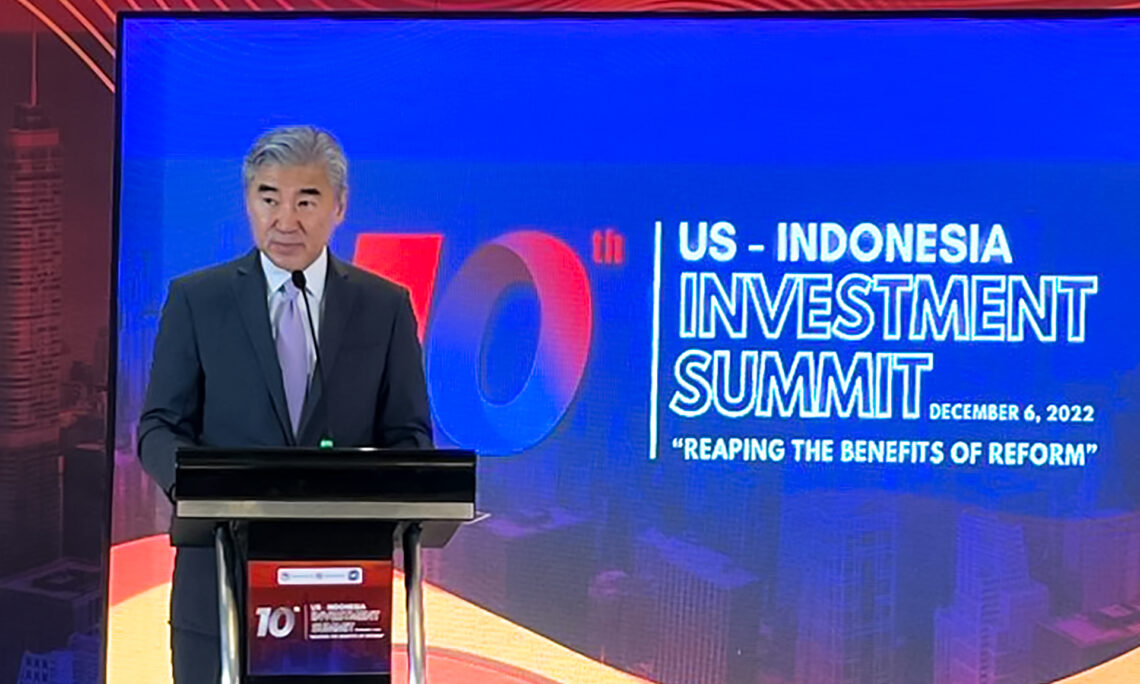 It is my honor to join you at the 10th Investment Summit organized by AmCham Indonesia.  2022 has been a very exciting year for mobilizing investment in the United States and Indonesia.

President Biden signed the Infrastructure, Investment and Jobs Act just a year ago, and already over $185 billion of investment has taken place in over 6,900 projects that have made the U.S. transportation system stronger and expanded green solutions for public transit.

And under the CHIPS and Science Act, we will invest $52.7 billion for American semiconductor research, development, and production.

Indonesia’s successful term as president of the G20 further showed how important investment will be as we seek to strengthen our economies following the impacts of the COVID-19 pandemic.

At the Partnership for Global Infrastructure and Investment event in Bali, Presidents Biden, Jokowi, and von der Leyen showed the world we will recover together, recover stronger.  G7 countries are mobilizing $600 billion by 2027 for investments in infrastructure in low- and middle-income countries – sustainable, transparent, and quality infrastructure.

At the G20, Presidents Biden and Jokowi, along with Japanese PM Kishida and other leaders, also announced the launch of the Just Energy Transition Partnership – known as “JET-P” – with Indonesia.  This is a landmark partnership designed to create an ambitious and fair power sector transition in Indonesia.

The JETP partnership combines a high level of Indonesian climate ambition with $20 billion in resources from public and private partners, to support Indonesia’s goal of a swift and just energy transition.

JETP will significantly accelerate Indonesia’s transition toward a cleaner energy future, focused not only on delivering strong emissions reductions, but also on driving sustainable development and economic growth while protecting the livelihoods of communities and workers in affected sectors.

We are also delighted Indonesia is participating fully in the Indo-Pacific Economic Framework.  IPEF’s four pillars on trade, supply chain resiliency, clean economy and fair economy provide a roadmap for how Indonesia and the United States can maximize the investments already made and attract new investment to both our countries.

One of the reasons the United States and Indonesia have such a strong relationship is because of our shared values.  U.S. businesses are eager to deepen this relationship and invest in Indonesia.  They uniformly tell us they welcome clear regulations that allow them to predict potential impacts to their businesses.  Around the world, if laws are unclear, businesses are often reluctant to invest because they are not sure how different laws may impact their business operations.

In this moment, we are paying close attention to Indonesia’s deliberations over its criminal code.  We remain concerned that morality clauses attempting to regulate what occurs in a household between consenting adults can have a negative impact on Indonesia’s investment climate.  Criminalizing the personal decisions of individuals would loom large within the decision matrix of many companies determining whether to invest in Indonesia.  The outcome could well result in less foreign investment, tourism, and travel.  The success of the G20 has shown the positive trajectory for Indonesia’s future.  It is important to continue the dialogue and ensure mutual respect for one another, including LGBTQI+ persons. Countries like Indonesia and the U.S. can learn from one another about how to ensure inclusive societies for all.

This year’s investment summit is an excellent opportunity to reflect on these important issues and developments, and together determine the next steps to further strengthen our economic partnership.  I am confident open dialogue between U.S. and Indonesian businesses and governments will bring greater prosperity for both of our countries in the years and decades to come.  Thank you.

Excited to attend @AmChamIndonesia Investment Summit today & celebrate positive momentum in U.S.-Indonesian trade relations; 2022 has been a terrific year with the launch of #IPEF, #PGII, #JETP, #MCC, & other initiatives. pic.twitter.com/H9JJt95FPY