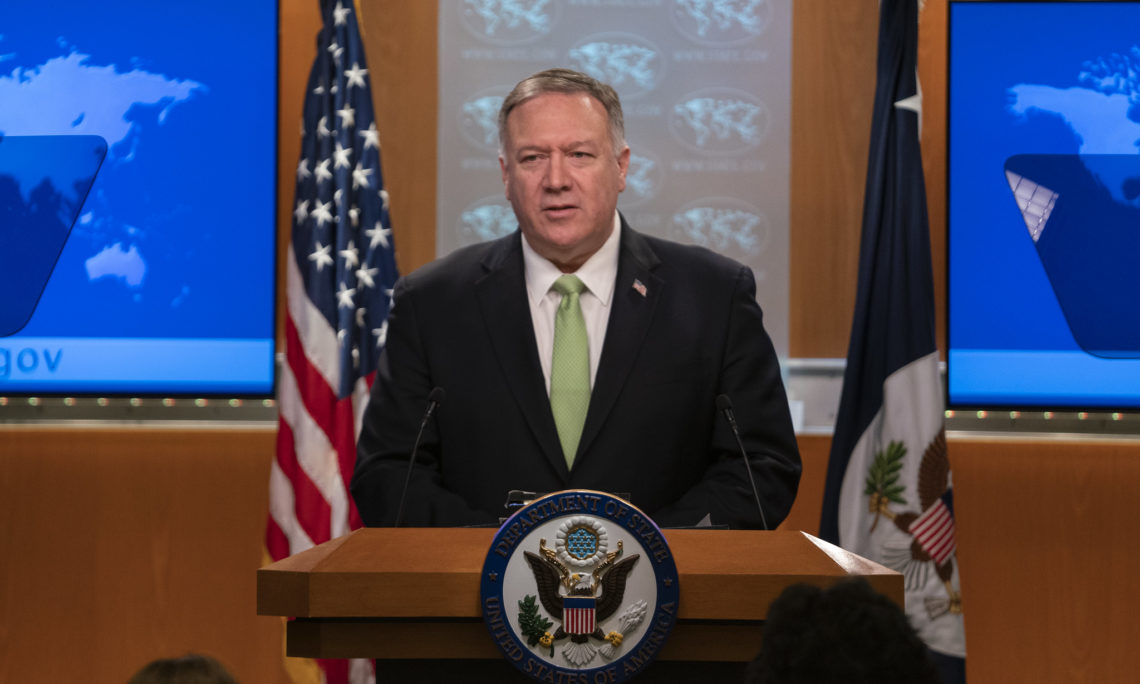 Remarks by Secretary Michael R. Pompeo on the Release of the 2019 Country Reports on Human Rights Practices (State Dept.)

Secretary Michael R. Pompeo on the Release of the 2019 Country Reports on Human Rights Practices

SECRETARY POMPEO:  Hello, everyone.  Good morning.  Every year, for 44 years, the State Department has written the most comprehensive and fact-based human rights report in the world.

State Department team members in Washington and our embassies work with experts in many countries to get the most critical work done on this important topic.

They continuously set the gold standard, and this year is no exception.

It’s a broad and challenging mission, but human rights are at the core of what we believe as Americans, and so we have to execute this well.  To Assistant Secretary Destro and everyone who worked on it, congratulations.  Thank you for all of your hard work.

As our founding documents remind us, nothing is more fundamental to our national identity than our belief in the rights and dignity of every single human being.  It’s in our Declaration of Independence.

On this issue, all Americans have common cause with freedom-loving peoples all around the world.

The State Department’s Commission on Unalienable Rights is exploring the deep roots of America’s foundational belief in these ideals, and I look forward to receiving the commission’s work sometime around the Fourth of July of this year, a fitting time.

We’re blessed that the unalienable rights are secure here at home.  But we all know the rights of life and liberty and the pursuit of happiness don’t just belong to Americans, they belong to everyone everywhere.

Today this report sheds light on dark places where rights like the ones I described are infringed upon.

I want to highlight this morning just a few examples of human rights abuses from the 2019 report that are happening in China, Iran, Venezuela, and in Cuba.

As I’ve said before, the CCP’s record in Xinjiang is the “stain of the century.”  It tries to hide what it’s doing by intimidating journalists.

Chinese citizens who want a better future are met with violence.

In July, Wang Meiyu stood outside a police station calling for elections.  The police arrested him, and less than three months later his wife got a call.  He was dead.

She never got an explanation.  Instead she was brought in and asked to identify a body so bruised and broken it was barely recognizable.

This kind of abuse is too familiar in Iran as well.  Just a couple months back, on December 19th, I spoke about Pouya Bakhtiari.

He was a young engineer, one of hundreds of thousands of Iranians who protested the regime last fall.  His mother, Nahid, was with him.

By the end of the day, they were no longer marching shoulder to shoulder.  Nahid was holding her 27-year-old son’s body.

Pouya had been shot in the head by security forces.

And the family’s nightmare was not over.  Since my speech three months ago, the regime has denied them the right to mourn Pouya in accordance with their faith.  When they tried to hold a funeral, Pouya’s 11-year-old nephew, his grandparents, his parents, and other relatives were all arrested.

They’ve been released now, but live in fear under house arrest.

Today I want great Iranians like the Bakhtiaris to know America remembers those lost and stands for their freedom.

Last year, opposition leader Elwin Mendoza was hauled before a military tribunal.  His crime?  His crime is that he protested in favor of humanitarian aid delivery.

Maduro’s thugs locked him up, neither his family nor a doctor could visit, and one month later he had died – at the age of 34.

My final comment this morning is on Cuba.  The name Jose Daniel Ferrer appears 17 times in this report.  He’s one of thousands of political prisoners who, over the years, have been dragged, chained, and beaten at the hands of the regime.
Tomorrow he will be sentenced by a Cuban court.

The spurious charges we’ve seen so far follow a pattern of arbitrary intimidation against Cuban citizens whose only crimes are to criticize the policies that have held that island back for 61 long years.

We pray for a day when Cubans, Venezuelans, Chinese, Iranians, and all peoples can speak and assemble freely without fear of their own governments.

The 2019 Human Rights Report honors those I’ve named and who have paid the ultimate sacrifice fighting for freedom and for human dignity.  It’s a service to those punished for their beliefs and those who continue the fight.

It also promotes peace, accountability, and security by reminding every government of the high standards of human rights that they must live up to.

And finally, this report is a sign of America’s continued belief in the peoples of the world who challenge their governments to respect and uphold fundamental rights for every one of their citizens.

Assistant Secretary Destro, well done.  Bob will now take a few of your questions.  Thank you.