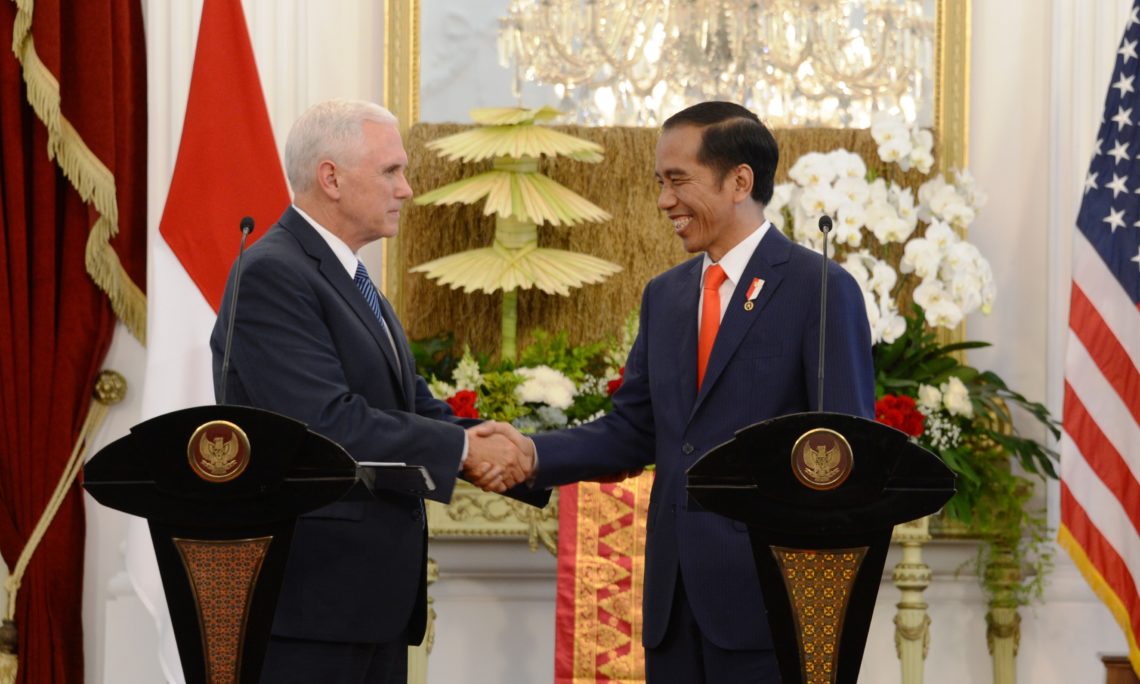 April 20, 2017
Remarks by the Vice President and Indonesian President Widodo to the Press

PRESIDENT WIDODO: (As translated.) It is an honor for Indonesia to welcome the visit of the Vice President of the United States, His Excellency Michael Richard Pence.

This is my first meeting with the new administration of the United States. However, I have communicated with President Trump since January. And receiving the courtesy call of Vice President Pence, we discussed a number of bilateral and international issues.

The first is the commitment of the United States to enhance its strategic partnership with Indonesia. We’ll focus on the issues of cooperation and investment. And next month, there will be a team that will discuss the arrangement of trade and investment bilateral between the countries based on the principles of win-win solution.

Second, as the largest Muslim population country in the world, as well as the third largest democracy in the world, Indonesia also agree to strengthen cooperation on peace. That is what I can convey to you all in this auspicious occasion. And I also send my best regards to President Trump through Vice President Pence. That is all from me. Thank you very much.

VICE PRESIDENT PENCE: Good morning. Thank you, President Widodo, for hosting me here today. Thank you for your warm hospitality to my family, and the extraordinarily colorful welcome that we received from all the children as we approached this morning will be a memory for a lifetime.

It is my great privilege to be here in Indonesia. My very first visit to Indonesia to represent the President of the United States of America, Donald Trump. And I bring his greetings to you and his appreciation for your kindness and outreach since his election in November.

I know I’m the first member of President Trump’s administration to visit Southeast Asia, and the President sent me here — sent me here as a sign of the high value the United States places on our strategic partnership with Indonesia.

As the second and third largest democracies in the world, our two countries share many common values — including freedom, the rule of law, human rights, and religious diversity.

The United States is proud to partner with Indonesia to promote and protect these values, the birthright of all people.

And as President Widodo and I discussed under President Donald Trump, the United States and Indonesia are going to work even more closely together for the mutual benefit of our nations, our people, and for the benefit of Southeast Asia, as a whole.

Economically, President Trump and I seek to expand the United States’ commercial relationship with Indonesia. And the President and I spoke about that very openly today, and we look forward to those discussions continuing.

American companies have been doing business in Indonesia for years, and American products and services have contributed greatly to Indonesia’s economic development. But we believe that we still have room for significant progress.

Under President Trump’s leadership, the United States seeks trade relationships that are both free and fair, that spur job creation, and economic growth for both parties.

As you, President Widodo, have said so often, we’re looking for a win-win relationship, and we’re confident that we can find it on an increasing basis.

We believe we must level the playing field, break down barriers to ensure that American exporters can fully participate in the Indonesia market, the same freedom that Indonesia exporters have had in many sectors in the United States for many years.

Mr. President, President Trump and I look forward to working with you to make progress for this objective and are grateful for your openness to our teams beginning those conversations in the coming weeks.

The United States is also proud to be one of Indonesia’s oldest and most engaged defense partners. And under President Trump we are firmly committed to continuing to collaborate on the security of both of our peoples. A stronger defense partnership will serve us well as we confront the various security threats and challenges that we now face. And of course, one of the greatest threats we face is the rise and spread of terrorism.

Sadly, Indonesia is no stranger to this evil, nor is the United States of America, as the President and I discussed. The world watched with heartbreak in January of last year when ISIS-linked terrorists struck in central Jakarta in a barbaric suicide bombing. Our hearts broke for your people. This vile attack claimed the lives of five innocents, injured more than two dozen others. What I can assure you and the people of Indonesia is that you had the condolences and the prayers of the American people as you confronted this tragedy.

We too know the terrible cost of terrorism, and the United States stands with you to condemn it and to confront it.

We will also continue to work with Indonesia to defend the rules-based system that is the foundation for Southeast Asia’s peace and prosperity. The United States will uphold the fundamental freedoms of navigation and overflight in the South China Sea and throughout the Asia Pacific; will ensure the unimpeded flow of lawful commerce; and promote peaceful diplomatic dialogue to address issues of regional and global concern.

Finally, with President Trump’s leadership, the United States intends to deepen our cultural ties with the nation and the good people of Indonesia. Later today I’m greatly humbled to have the privilege to visit Indonesia’s national mosque, where I’ll have the opportunity to speak with leaders of many faiths.

And, Mr. President, I’m very much looking forward to that visit and that honor.

As the largest majority Muslim country, Indonesia’s tradition of moderate Islam, frankly, is an inspiration to the world. And we commend you and your people.

In your nation, as in mine, religion unifies — it doesn’t divide. It gives us hope for a brighter future, and we are all grateful for the great inspiration that Indonesia provides for the world.

Rest assured, under President Trump, the United States welcomes all who share our values and strive for that brighter future. Today on President Trump’s behalf, I have the privilege of reaffirming the United States’ strategic partnership with Indonesia and declaring our commitment to strengthen our bonds of friendship, commerce, and security.

Today I say with confidence through our continued partnership, the United States and Indonesia will continue to maintain a peaceful, stable, and a prosperous Southeast Asia for the benefit of both of our nations and for the benefit of the world.