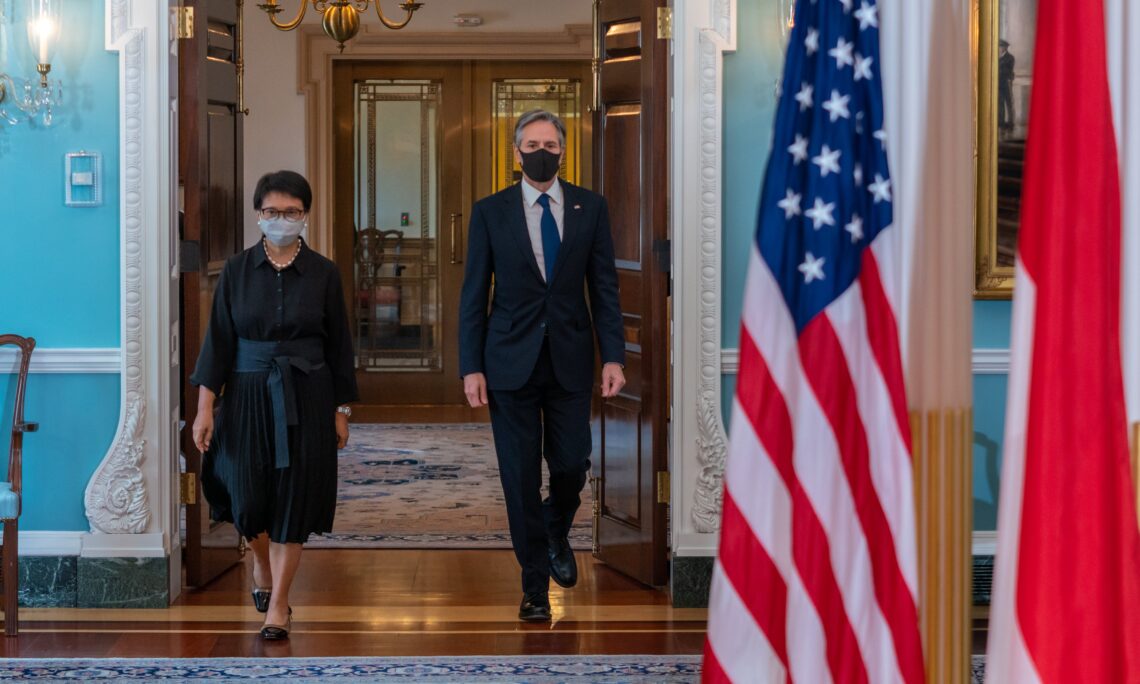 Readout
Office of the Spokesperson
August 3, 2021

The below is attributable to Spokesperson Ned Price:

Secretary of State Antony J. Blinken met with Indonesian Foreign Minister Retno Marsudi today in Washington, D.C.  Secretary Blinken and Foreign Minister Retno emphasized the growing importance of the U.S.-Indonesia Strategic Partnership and its contribution to a secure and prosperous Indo-Pacific.  This visit marked the first strategic dialogue between the two countries since the establishment of our strategic partnership in 2015.  The U.S.-Indonesia strategic partnership is based on a fundamental belief in democracy, economic growth driven by innovation, and a rules-based international order in the Indo-Pacific.

The two leaders discussed the impact of COVID-19 and steps for pandemic recovery.  The United States recently announced a donation of 3.5 million vaccine doses to Indonesia, bringing the total number of donated vaccines to eight million and has also provided more than $65 million in COVID-19 related assistance.  The leaders further expressed shared views on maritime security and the peaceful resolution of ongoing conflicts in the Middle East.  The Secretary praised Indonesia’s leadership in ASEAN and stressed the importance of resolving the crisis in Burma and restoring it to the path to democracy.  Secretary Blinken welcomed Indonesia’s upcoming G20 presidency, commended Indonesia’s efforts to support Afghanistan’s peace negotiations, and discussed opportunities for Indonesia to raise its climate ambition.  The leaders committed to working together in the fight against the global pandemic, fighting the climate crisis, boosting bilateral trade and economic ties, defending freedom of navigation in the South China Sea, and continuing collaboration in cybersecurity and preventing cybercrime.

We look forward to expanded cooperation in Southeast Asia, in the United Nations, and around the world.

Today I met with Indonesian Foreign Minister @Menlu_RI. The U.S.-Indonesia Strategic Partnership is increasingly important to accomplishing our goals in the Indo-Pacific region and around the world. We look forward to expanding our cooperation! pic.twitter.com/7SaWU5fhdI