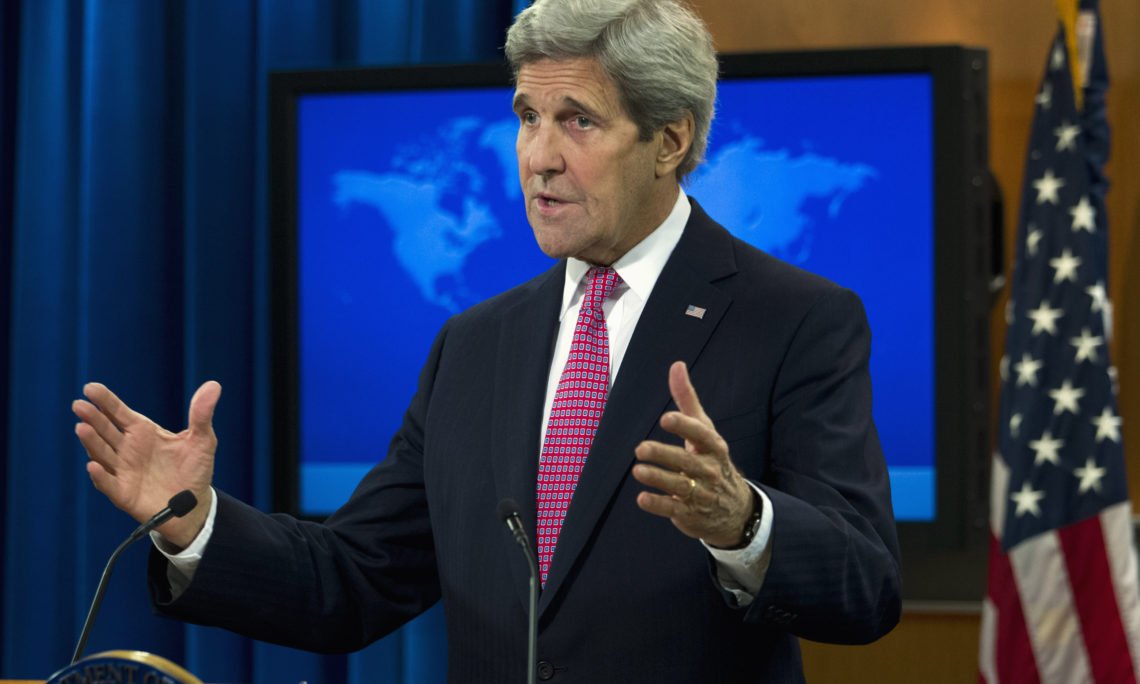 SECRETARY KERRY: Good afternoon, everybody. Thanks for being here. I’m going to make a statement and I have to run from here to an NSC meeting on a number of issues, so forgive me if I dash out of here. I’m not trying to avoid you, but Tom will take some questions and I think John’s going to come to the podium and he’ll make some statements. I know there’s some events that you’re curious about and we will be commenting on them, but let me at this moment wait until we do a little more homework with respect to that.

Particularly pleased that you’re here for the release of the human rights practices – our report for 2015. I want to thank Tom Malinowski and his entire team for producing these materials which takes an enormous amount of work and effort, as I’ve said in the past. It’s really an all-year effort. Next year’s report, the work will begin today, and it’s a continuous effort. This is the 40th edition of what is among, without any doubt, the Department’s most widely read and significant publications, and we think it’s a model of careful and comprehensive research.

I want to stress about the standard that is applied in the compiling of this report. The norms referred to in this report, in these reports, are universal norms. They are not something that we make up. They’re not some arbitrary standard of the United States, which we seek to impose on people. These are universal standards of human rights that have been adopted and accepted and are agreed to by most nations in the world, and even some nations that have agreed to them but violate them. These are the international standards.

And in the arena of human rights, every government – every government – has the ability to improve, including the United States. The point that we make over and over again is that respecting human rights isn’t just a moral obligation; it’s an opportunity to harness the full energy of a country’s population in building a cohesive and prosperous society. And it doesn’t jeopardize stability; it enhances it. And you can measure that in country after country where human rights are respected, people are happier, people are freer to pursue their own designs, happier and freer to be artistic and creative, to be entrepreneurial, to make a difference in the building of the community.

And that is not a theory. That is a fact that is proven every day in countries all around the world. Countries that suppress freedom of expression are less likely to have economies that innovate, diversify, and grow. And societies that discriminate against women and minorities particularly have trouble competing against those that benefit from the contributions of all of their citizens. And governments that deny political liberty forfeit public trust, thereby opening the door to civic unrest of all types, including, I might add, violent extremism. It is also a fact that countries where governance is really bad or nonexistent or corrupt are countries that also wind up seeing remarkable abuses within a criminal justice system if there is one, or just in the day-to-day treatment of people.

Here is the truth, we believe: A government that fails to respect human rights, no matter how lofty its pretentions, has very little to boast about, to teach, and very little indeed in the way of reaching its full potential. It is important to underscore that the reports that we release today, as voluminous as they are, represent just a tiny fraction of what this department does to advance freedom and dignity across the globe.

Human rights are part of our agenda with every single nation and also in the multilateral organizations to which we belong. Not a day goes by without one or more of our officials in this department advocating on behalf of basic liberties, speaking out against corruption, pressing for the release of political prisoners, or underscoring our support for constitutional procedures and the rule of law. And I might add, from myself to every official who travels on behalf of our country, we raise specific names, specific cases, individuals, with leaders in countries around the world.

In the past year, I’ve traveled to a host of countries where our backing for human rights and democratic principles is a focus of our diplomacy. This includes the states of Central Asia, where civil society is heavily embattled. It includes Egypt, where I emphasized the importance of distinguishing between violent and nonviolent dissent. It includes Cuba, where President Obama and I urged the authorities to allow more political openness and online access. There is no question in my mind that most Cubans are far more interested in plugging into the world economy than in recycling arguments left over from the Cold War. The only question is how long it will take for the officials in Havana to catch up with the population.

Of course, not every conversation that we have on human rights bears fruit, and certainly not immediately and not in all areas. But steady effort, we have seen again and again, can foster progress and make a difference. And I particularly want to emphasize that one life saved is a difference worth fighting for.

For example, we have seen important democratic gains in such countries as Tunisia, Nigeria, Sri Lanka and Burma, though in each there are challenges that still need to be overcome. But we are working closely with each of those countries in efforts to help meet those challenges.

Vietnam is another example. The country remains a single-party state, but Hanoi has pledged, as a member of the Trans-Pacific Partnership, to allow for the formation of independent trade unions for the first time – a potential significant advance for freedom of association for workers.

In Azerbaijan, we have welcomed the release in the past month of a number of political prisoners and we hope for more. And we believe that expanding freedom of expression and political participation will do much to strengthen that country and our relationship.

The Human Rights Reports spell out our concerns on every continent, but the most widespread and dramatic violations in 2015 were those in the Middle East where the confluence of terrorism and the Syrian conflict caused enormous suffering. I have discussed this crisis in this region repeatedly in recent weeks, and so I’m just going to highlight a few points right now.

First, the United States wants those responsible for committing human rights abuses in Syria, Iraq, and elsewhere to be held accountable for their actions. To that end we are supporting international efforts to investigate, collect, analyze, and preserve evidence of atrocities.

Second, we are doing all we can to aid the victims of human rights abuses, including counseling and other assistance for women and girls who have endured slavery.

Third, with our partners we continue to go after Daesh, shrinking its territory, degrading its leadership, hammering its revenue sources, cutting its supply lines, and rallying the world against its genocidal actions and ideology.

And finally, we are deeply committed to the search for a political solution to the conflict in Syria, including full access to humanitarian supplies, sustainment of the cessation of hostilities, the release of the most vulnerable prisoners, and a Syrian-led political transition in accordance with the Geneva Communique of 2012 and UN Security Council Resolution 2254. Given the horrors of these past five years, I cannot imagine a more powerful blow for human rights than putting a decisive end to this war—to the terror, to the repression, and especially to the torture and the indiscriminant bombing and thereby make possible a new beginning for the Syrian people.

There are some who believe that after decades of dictatorship and years of bloodshed Syria can never recover. Well, I disagree with that. And I think the example of the human species and the human spirit in so many different places, in so many different times in history, shows exactly how resilient people can be. In many ways, the untold story of recent years is how disparate groups of brave Syrians have managed to keep their communities alive amidst the most incredible hardship and carnage. And as violence has declined over the course of the last weeks, we’ve seen evidence of this resilience already in the operation of local councils, the organization of relief networks, and the resumption of nonviolent political activity. There is no guarantee that Syrians will be able to put their country together again, but I’ll tell you, after all they have been through, they deserve the fairest opportunity to be able to try.

Now, I talked to Staffan de Mistura today, from Geneva, and we talked about the reconvening of the peace talks at this particular moment. And I want to emphasize on his behalf and on behalf of the International Syria Support Group and all the nations involved in this, we urge all of the participants on one side or the other, all of the combatants – the regime, others – to adhere to the cessation of hostilities. There is an opportunity in these days ahead to be able to negotiate transition according to Geneva communique of 2012, which is precisely what they say they want. The Iranians have signed up to it. The Russians have signed up to it. The Turks, the Qataris, the Saudis, the Emiratis, most of the European countries – all the countries that are part of the International Syria Support Group. And we strongly urge all of the combatants to give Staffan de Mistura and his team an opportunity to be able to do their work in the next hours and days in Geneva.

Before I close, I want to say a word about the issue of torture. I want to remove even a scintilla of doubt or confusion that has been caused by statements that others have made in recent weeks and months. The United States is opposed to the use of torture in any form at any time by any government or non-state actor. America’s commitment to the humane treatment of persons in captivity began as far back as with General George Washington in the Revolutionary War. It has been reaffirmed countless times throughout our history and in a host of international commitments. We declared this opposition to torture yet again just last year in bipartisan legislation approved by the United States Congress. This is a standard that we insist that others meet, and therefore we must meet this standard ourselves.

I know personally that the fierce anger that arises in war when fellow countrymen are attacked, whether they are soldiers or civilians, can sometimes prompt fury, rage, revenge. But there is a sharp dividing line between societies that abandon all standards when times are tough and those that do their absolute best to maintain those standards. Because ultimately, upholding core values is what makes a nation strong.

I am please now to turn the floor over to Tom Malinowski for his remarks and for your questions. Thank you all.