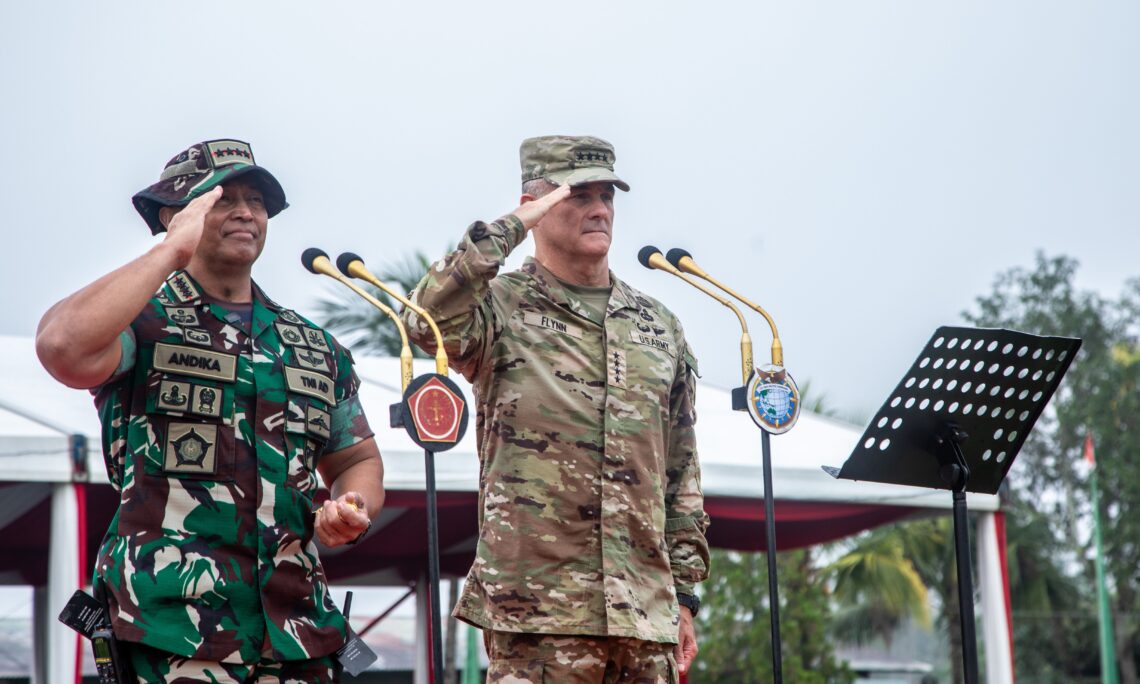 BATURAJA, Indonesia – Under the banners of 14 nations, the 16th annual Garuda Shield exercise, the cornerstone of the military partnership between the United States and Indonesia, officially kicked off on August 3, 2022. Expanding from a bilateral training event between the Indonesian Army and the U.S. Army, this year’s “Super Garuda Shield” is now one of the biggest joint, multinational exercises in the Indo-Pacific region.

The strong and diverse Super Garuda Shield 2022 features a number of “firsts,” including the first ever tri-lateral airborne jump among the United States, Indonesia, and Japan, which concluded early today.  The multinational exercise’s planning, operations, exchanges, and activities increase all participating nations’ military defense capabilities and work to maintain a free and open Indo-Pacific.

“When we’re together like this, we are stronger,” said Commanding General of the U.S. Army Pacific, General Charles Flynn. “Together as a multinational force, Garuda Shield is an important expression of our teamwork, our interoperability and our unity as a group of nations that seek to have a free and open Indo-Pacific and maintain a rules-based order.”

The opening day ceremony showcased a formation of combined forces, highlighting the themes of joint, multinational interoperability and partnership.

More than 4,000 combined forces personnel, including first time participants Australia, Singapore, and Japan Ground Self Defense Force, are participating in support of the exercise.

Maj. Gen. Stephen G. Smith, Commanding General, 7th Infantry Division and exercise director for Super Garuda Shield 2022 hailed the opportunity to be training side by side with Pacific partners.

“This Indonesian-led exercise has grown in scope and scale. Every time we can build our joint readiness is a great opportunity for us and the region,” said Smith. “The growth of this exercise shows its importance and how these nations view this as a consequential area within the Indo-Pacific region.”

Over the duration of the exercise, Super Garuda Shield will feature field and maritime training events to include an amphibious exercise, maritime security training, military operations in an urban terrain training, an air defense exercise, airborne operations, and an airfield seizure exercise. Also planned are command post exercises where participating troops will practice their ability to plan, command, and communicate with each other in a simulated operational environment.