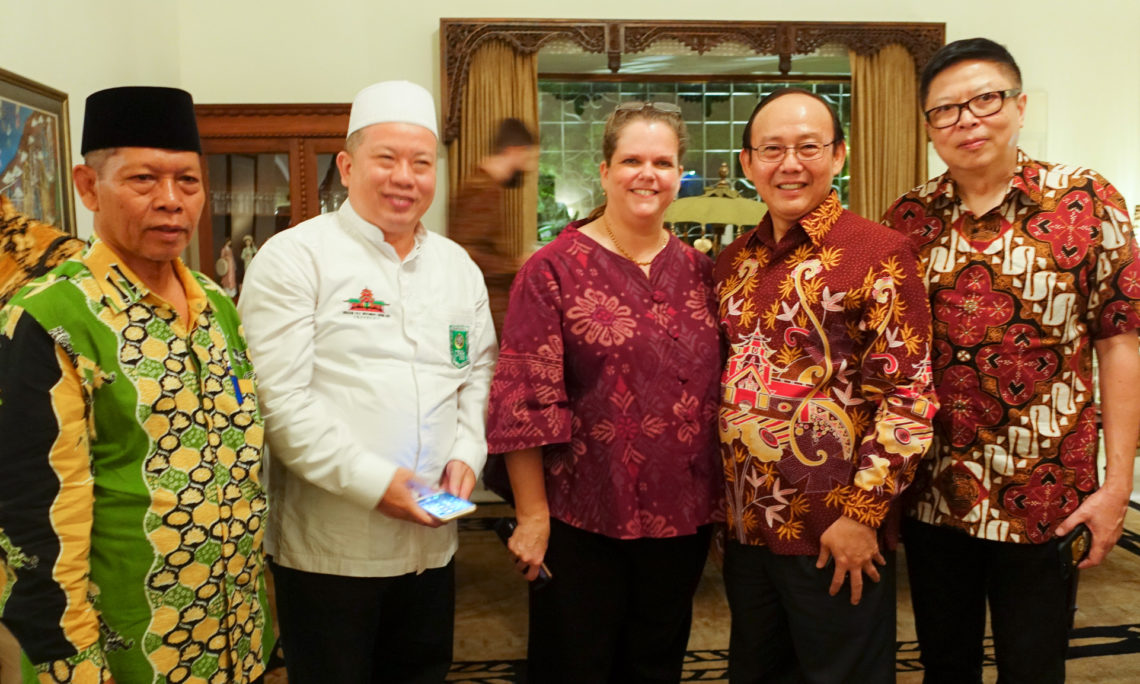 Thanksgiving is a Time to Celebrate Tolerance and Diversity (State Dept.)

SURABAYA – To celebrate Thanksgiving, Consul General Heather Variava and her team visited a variety of houses of worship, and religious communities in Surabaya.  These visits highlighted the tolerance and diversity of Eastern Indonesia, and also showed the similarities between the United States and Indonesia.  “Just as the United States is a country made up of many different peoples and cultures, Indonesia finds strength in the same qualities in their own country.  Thus, our countries’ mottos are similar – Bhinneka Tunggal Ika and E Pluribus Unum – out of many, one,” said the Consul General.

Visiting nine different religious communities and houses of worship, the Consul General and her team heard first-hand about religious traditions and the history of religious pluralism in Surabaya.  Consul General Variava began at the Cheng Hoo Mosque, which draws its architecture from a range of inspirations, including the Niu Jie Mosque in Beijing as well as traditional Javanese design; Boen Bio Confucian Temple which dates to the late 1800s and was influential in the anti-colonialism movement, and Surabaya’s oldest Catholic Cathedral, the Church of the Birth of Our Lady, where it is possible to see brickwork damaged in the 1945 Battle of Surabaya.  She also met with the Buddhist leaders of Vihara Dana Maitreya, which recently celebrated its golden anniversary, the historic Ampel Mosque, which dates back to the 18th century, and the Hindu Grand Jagat Karana Temple, along with leaders of the Protestant Indonesian Bethel Church.

Further visits took the Consul General and staff to visit a range of religious minority communities, including the Sapta Darma community, the Church of Jesus Christ of Latter-day Saints, and the Ahmadi and Maitreya communities.  While these religions are not officially recognized by the government, their faith, devotion and community engagement of all the religious groups is clear.

For more information, please contact the Public Affairs staff of the Consulate General of the United States in Surabaya at passurabaya@state.gov.